“As a race, we’re deeply suspicious of being spied upon,” according to Jeremy Bullmore, the advertising sage and author. “A cartoon of many years ago identified this anxiety perfectly. A man stands looking at one of those maps of a town centre to be found in car parks. A large arrow is labelled: YOU ARE HERE. And the man, clearly unnerved, is saying ‘How do they know?’”

Mr Bullmore, who used to run the ad agency J. Walter Thompson, recalls the joke in an essay about the perils of personalisation in the digital age, called Just Because You Can, Doesn’t Mean You Should, in the recently published annual report for advertising group WPP.

“Personalisation can get altogether too personal for comfort,” he warns, explaining why a highly targeted marketing message is “as likely to alienate as it is to appeal” if a consumer finds it creepy.

Knowing where to draw the line on targeting is one of the biggest challenges facing marketers and advertisers because there has been an explosion in the volume of personal data on individuals.

“Advances in technology have allowed marketers to learn more about their customers than ever before,” says Ashish Koul, president of Acqueon Technologies, a marketing automation firm, explaining how consumers are leaving digital footprints wherever they go.

Rowan Scranage, vice president and general manager, Europe, Middle East, Africa and Asia-Pacific, at data company Couchbase, says people will often welcome targeted advertising, so long as the message and the context are appropriate, for example receiving a free voucher on your mobile phone for a coffee near a coffee shop.

“When someone asks the question ‘How do they know that about me?’ you want it to be a positive reaction, instead of paranoia,” he says, in a nod to Mr Bullmore’s story about the cartoon.

According to Mr Scranage, the key is for marketers to use data “in a manner that always adds value or insight and ultimately benefits the person whose data is being used”. He warns: “If a campaign doesn’t tick those boxes, but is still overly personal, that’s just plain creepy.”

Mr Koul says: “Marketers must play close attention to how they are contacting consumers. Small details like the time of day customers are contacted, the kind of information that is shared or even the communications channel that is used can make a huge difference in how the message is received.

“This is why marketers need to ensure they are adopting compliance in a non-intrusive way, for instance by ensuring they enforce ‘do not contact’ lists or ensuring they have consent to use people’s data.” 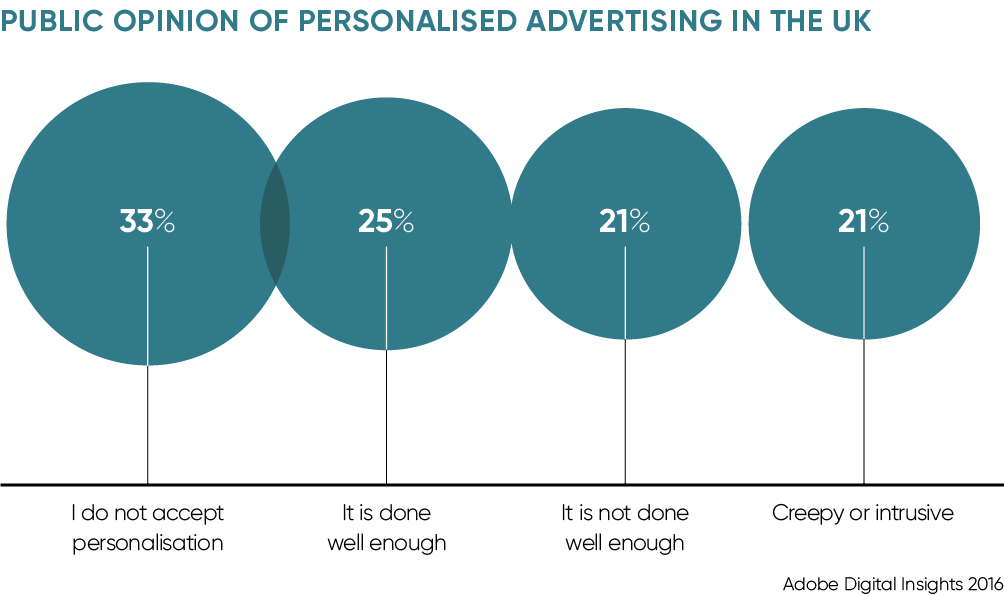 A surprisingly large number of reputable companies and organisations have run into trouble with regulators over data. Oxfam, Cancer Research UK and the Royal British Legion were among 11 charities fined a combined total of more than £100,000 by the Information Commissioner’s Office earlier this year for misusing information about millions of past donors in a bid to raise further money. Honda and Royal & Sun Alliance are other companies that have incurred fines for breaking UK data rules in recent months.

The law will get tougher from next year when the EU General Data Protection Regulation comes into force that will impose much heavier fines on errant companies.

While data protection must be a priority, Mr Scranage says that many chief marketing officers (CMOs) face a very different, practical problem – harnessing the data they already have.

“Marketers are much better at collecting, storing and analysing data than they are at actually using it, resulting in departments sitting on far more data than they know how to use,” he claims.

If personalised marketing is to fulfil its potential, it needs to be as close to real time as possible. Mr Scranage adds: “It gives marketers the ability to reduce the time required to understand what’s really driving customer engagement and, ultimately, move faster on the things that matter.”

But the smart CMO knows it pays to tread carefully. “We don’t, on the whole, like pushy people,” says Mr Bullmore. “And in much the same way, we won’t respond well to pushy brands.”