Art and science of marketing Microsoft

Things have changed during Scott Allen’s 22 years in marketing. There was a time, Microsoft’s UK chief marketing officer (CMO) says, when hiring marketers just meant going on the hunt for creative talent. Now, the team he wants to build is different – part creative, part scientist.

“Ten or fifteen years ago it was mostly about creating content,” he says. “But now it’s also about knowing how to amplify it, whether that’s through social or paid channels, and understanding how digital channels work together, how social engagement works.

“You need people who are technically savvy as well. It’s crucial to have a firm grasp of the tools used for marketing automation, tracking and making sure that performance is measured against key performance indicators, so we’re not giving woolly reporting back to the business.”

Financial expertise is prized highly, too. “The analysis we do enables us to tie activity to revenue objectives,” he says.

Recent research carried out by the CMO Council and Deloitte suggests this is increasingly important not just at Microsoft, but for all CMOs. Some 73 per cent of respondents to a survey of more than 200 international CMOs said revenue was used to measure the efficacy of marketing spend – that’s way above the 45 per cent score of the next most popular metric, sales velocity, funnel strength and conversion rates.

That’s the way it needs to be, says Mr Allen, who has been in his current post since July last year and at Microsoft since 2014. The tail shouldn’t wag the dog. “There should be accountability in the marketing team. It’s very important that we think about the business plan and the revenue objectives first, and then about marketing second,” he says.

But it’s a complicated picture, borne out by more recent research, this time carried out by Spencer Stuart. The executive search firm found that the average tenure of CMOs at 100 of the top US ad spenders fell from 44 months in 2015 to 42 months in 2016. What’s more, that’s significantly shorter than other members of the C-suite. Chief financial officers at Fortune 500 companies can expect to spend 5.7 years in post, while chief executives at S&P 500 companies last an average of 7.2 years before moving on or being given the boot.

“You can’t afford to forget to take your leadership team on the journey with you,” says Mr Allen, alluding to one way in which some CMOs might have failed to hold on to their jobs. “It’s great to talk about the cool things that you’ve done, but you also need to be prepared to educate the leadership team to help them understand that if the company doesn’t invest in the technology, the tools, the processes or the skills of our team, then you may get left behind.”

There are other pitfalls too. The Pepsi television commercial starring Kendall Jenner that aired in April was a stark reminder that even long-established methods of marketing and advertising are subject to very modern standards. The ad, which appears to suggest that tensions between law enforcement and protesters are eased when Jenner gives a police officer a can of Pepsi, was widely criticised for both trivialising and attempting to capitalise on social movements such as Black Lives Matter. Amid an online furore, Pepsi issued an apology and withdrew the ad.

“It’s important to be constantly connected to what our customers are thinking and doing,” says Mr Allen. “Connecting with customers both on digital platforms and through physical, real-life connections allows you to have a clear idea about what’s relevant to them. That allows us to spend our money wisely, on what they really want to see.” 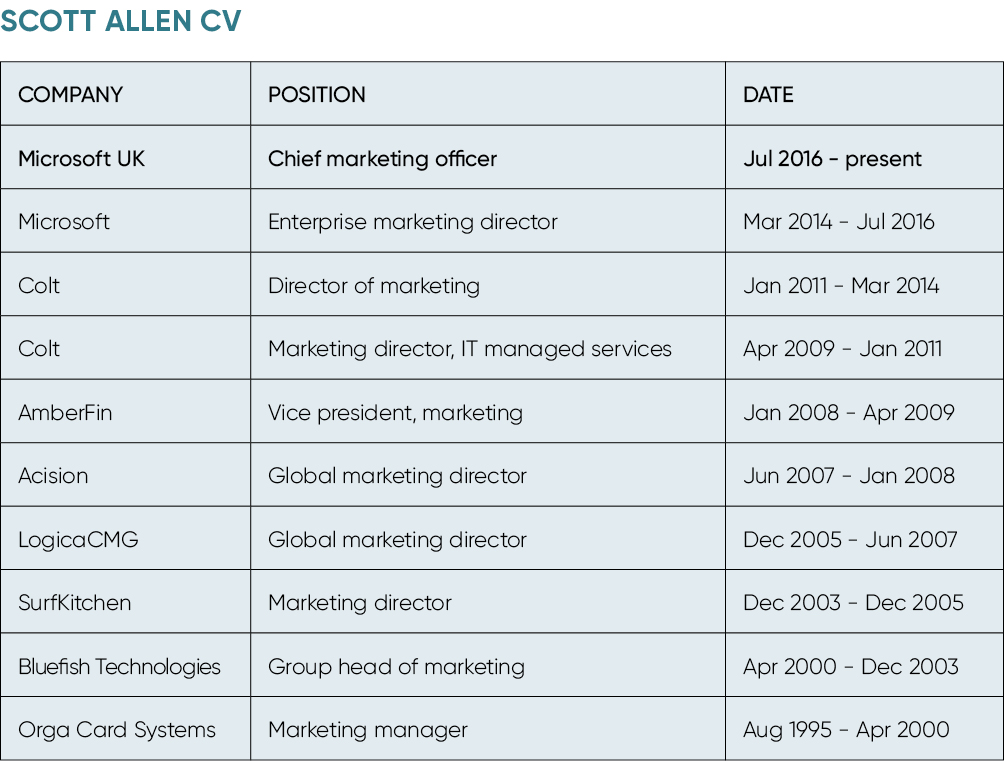 As well as the leadership of the company and link with customers, he thinks carefully about his team’s relationships with other parts of the business, particularly the sales department. “There’s no point in us doing marketing and the sales team not understanding how it’s going to help them. Equally, we can’t do marketing if we don’t understand what the sales objectives are. So I’ve worked really hard over to put together a connected sales and marketing experience,” he says. “They’re our internal customer; let’s treat them like a customer.”

So, Mr Allen says, he and his team takes into account things like the way in which members of the sales team communicate internally. He thinks about the timing of communications, ensuring they’re never too frequent and that the issues aren’t confused by trying to drive home too many points in one go. There’s also a concerted effort to hang out and spend time in person.

“That then allows us to go and create the marketing they need, but also to deliver things in the format they’re going to need them in, without making them feel as if it’s being forced on them,” he says.

IT is another crucial partner as this department seeks to make sure it has the technology and tools required for the job. But Mr Allen stresses that, even in this digital age, spending time with customers and prospective customers in person is still valuable. “Customers have all these tools that allow them to find out about products, so you can go a long way across the purchasing cycle before you have to engage with somebody physically,” he says. “That means we have to think more critically about how we deliver an experience to a customer that goes across both digital and physical.”

It’s no longer as simple as, say, deciding to do an event in Edinburgh next month. “Now, we decide to do an event in Edinburgh in this sector because we’ve done some analysis and we think these particular customers are looking to buy this particular product because they have these business issues. The data and the analytics bringing that to life are allowing us to make more forward-looking decisions,” he says.

Mr Allen says he has “reinvented” himself three times in his career, most recently when it became clear that social media was becoming a vital part of marketing as a discipline. And he believes that being willing to learn and adapt is essential for anyone wanting to enjoy longevity in their career.

The Microsoft UK CMO concludes: “I don’t want to be somebody who says, ‘Yeah, we need to do this new thing’, but then doesn’t embrace it or isn’t actually a part of it. If you remain relevant, and you’re seen to be relevant, then your team is more likely to look up to you and say, ‘Yeah, my CMO is leading us in the right way’.”