In a volatile world characterised by uncertainty, being agile is vital to business survival. No longer can boards rely on the traditional command-and-control style of leadership, with the next generation of workers expecting input on decision-making and valuing purpose in their jobs. At the same time, technological innovation is changing how, when and where we work.

According to McKinsey senior partner Aaron de Smet: “Agility is the ability of an organisation to renew itself, adapt, change quickly and succeed in a rapidly changing, turbulent, ambiguous world. Agility is not incompatible with stability, quite the contrary. Agility requires stability for most companies.”

How can leaders implement agile ways of working?

Traditional hierarchical structures and layers of management can impede progress towards agility that is needed for businesses to evolve. There’s no point building a business for the 21st century with a management model stuck in a past age.

But change is a slow process. McKinsey’s 2017 global survey, How to Create an Agile Organisation, shows that out of 2,500 businesses only 4 per cent had completed a company-wide agile transformation. However, three quarters believed organisational agility was a top-three priority and just under 40 per cent were in the midst of an agile transformation.

So how can business leaders successfully implement agile ways of working and what impact does this have on culture? For Atif Sheikh, chief executive at consultancy businessthreezero, it starts with the whole notion of leadership.

“In most organisations, leadership seems to have become a solo endeavour. However, the complex challenges facing business demands teams of leaders working in concert, not individual heroes,” he says.

Getting buy-in from all levels of management is key to creating the emotional commitment needed to transform business towards agile ways of working. To do this, Mr Sheikh believes middle management must be involved in both setting the transformation strategy and also carrying it out.

“You can’t design strategy by consensus, but once middle managers are committed, they should lead the effort to make the transformation happen. Success lies in a few key moments that matter and incredibly small details make the difference. These can only be spotted by the teams that actually do the work,” he insists. 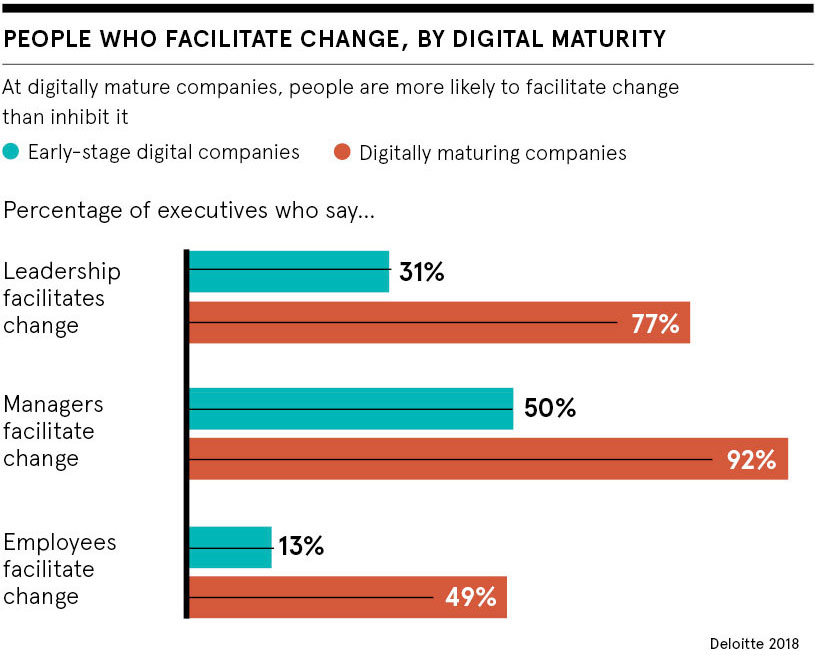 How Ericsson embraced agility at scale

One organisation that has transformed its processes to bring in agility at scale is Swedish telecommunications company Ericsson.

The company’s digital services division manages networks for approximately 40 per cent of the world’s mobile phone traffic, employing more than 2,000 people. Between 2008 and 2014, the entire department, then known as business unit networks, went through a transformation to embrace agile ways of working, with the aim of improving the time it took to get products to market and the speed at which it could make changes.

“When we started our transformation in 2008, our business was running well, but there were several issues relating to time to market and return on investment that we had tried to improve over several years without significant success,” says Hendrik Esser, special projects manager in Ericsson’s digital services division and one of the leaders of the transformation programme.

“Previous attempts were driven by sub-organisations working on their part of the process, resulting in a lot of activity but little outcome. We understood that real improvement can only be achieved by working across the entire organisation.”

To achieve this, Ericsson implemented cross-functional teams focused on particular projects. Each team worked towards both group and organisational goals and incentives instead of individual targets. Also Mr Esser moved away from management-level steering meetings towards high-frequency cross-functional team meetings, where issues could be resolved more dynamically.

With agile management, Ericsson now has more than 100 small teams working on projects in short three to four-week cycles. According to Mr Esser, this agile way of working has led to faster feedback, quicker development and, ultimately, higher revenue as Ericsson deploys projects ahead of schedule.

Crucially, implementing agility means the entire department has a new attitude to change. “Previously, we had heavy and slow change management procedures, handling hundreds of change requests as each project launched. Now we handle changes ad hoc by collaborating and sorting them out. Change has moved from being fought to becoming everyday business,” he says.

At Ericsson, implementing this culture change started from the top. The affected leadership team received agile coaching before the rest of the organisation to ensure they were a step ahead in their understanding. Then Ericsson identified middle-management coaches from each project team who attended coach-the-coach camps for three months before returning to their team to train them in the new systems.

“These people are still connected today in an informal coaches network and have an aligned understanding of an agile company culture and practices. This allows them to drive transformation in their teams, adapting to the local culture while ensuring we’re aligned on an organisational level,” says Mr Esser.

What can business leaders learn from agile startups?

Implementing agile ways of working in larger organisations can be tough. Mr Esser concedes that agile working was seen as something that might not work for companies of Ericsson’s size when he began researching it in 2008. So what can business leaders learn from the startup world, where agility and adaptability are often ingrained?

Founded in the UK in 2012, Onfido is an ID verification platform that has grown from three founding members to more than 200 employees across the UK, United States, India, Singapore and Portugal. This rapid expansion means agile thinking and experimentation is an essential component of its culture, according to interim vice president of human resources Ruth Penfold.

“When you are building a new business, you have to be prepared to experiment. Many businesses start out as one thing and go on to become something else. When you are investing the kind of blood, sweat and tears needed for a startup, having that emotional detachment to make a change is incredibly brave,” she says.

“People don’t all have to agree to be successfully agile; what counts is the ability to welcome intellectual challenge, discuss the right outcome and make fast decisions.” 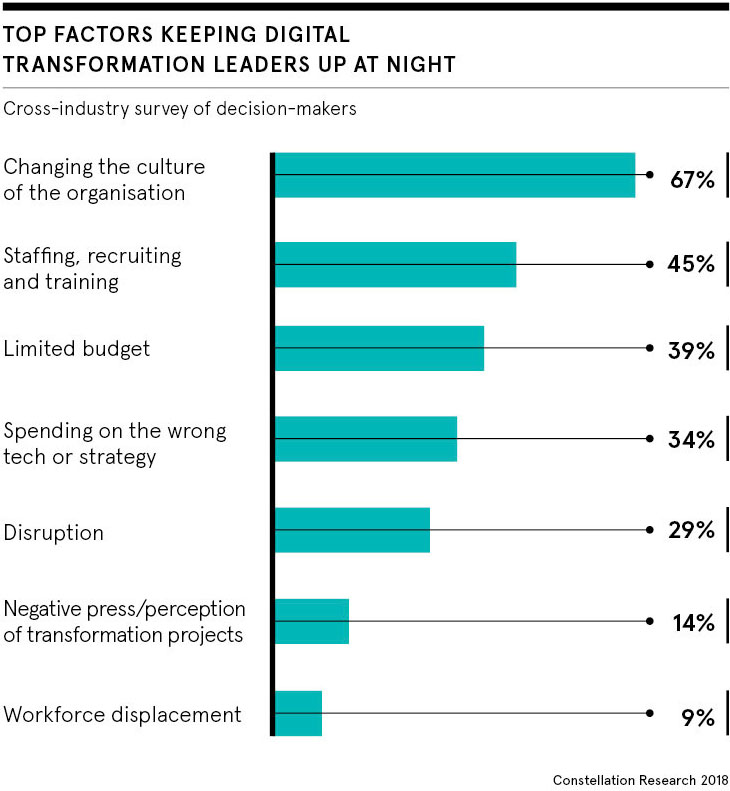 Agility requires a culture of closeness

Onfido’s entire model operates on cross-functional teams working collaboratively to deliver projects. This creates a more empathetic and empowered workforce, where colleagues are sensitive to the challenges each faces and are able to ensure those closest to a problem are involved in solving it. And while an organisation’s size can be a barrier to agility, ultimately it comes down to the culture and structure you implement, argues Ms Penfold.

This means ensuring a variety of voices are present and heard at the table when considering what direction the business should take during transformation. And while all these voices may not be involved in the final decision-making, ensuring they have been heard means you have all the data needed to get as close to the correct decision as possible.

People don’t all have to agree to be successfully agile; what counts is the ability to welcome intellectual challenge, discuss the right outcome and make fast decisions

“The people who are closest to a problem are almost always the best ones to find a solution. The clever startup understands this and gives space to innovate and make decisions. A clear roadmap helps to give an overarching steer, but the true nature of agile working is that you have to be prepared for things to change, and fast,” says Ms Penfold.

Implementing agile ways of working at scale is not an easy task, but too many businesses have become lost in corporate jargon and doomed attempts to become something that doesn’t fit their culture. Business agility is about adapting organisations to meet future challenges. Doing so requires implementing a culture accepting of change that empowers employees to make decisions. But it’s also about creating a structure that allows this to happen. As McKinsey says, the truly agile organisation is both dynamic and stable. 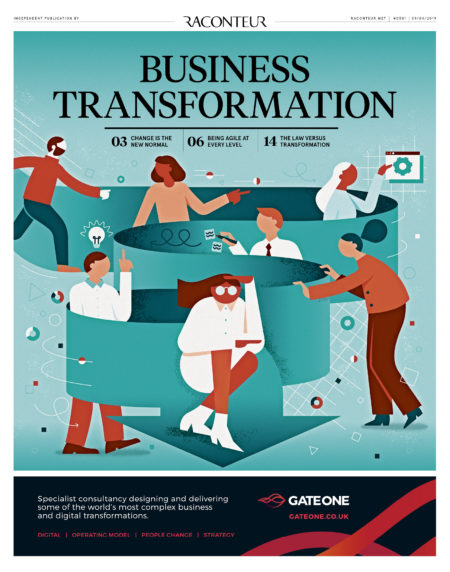