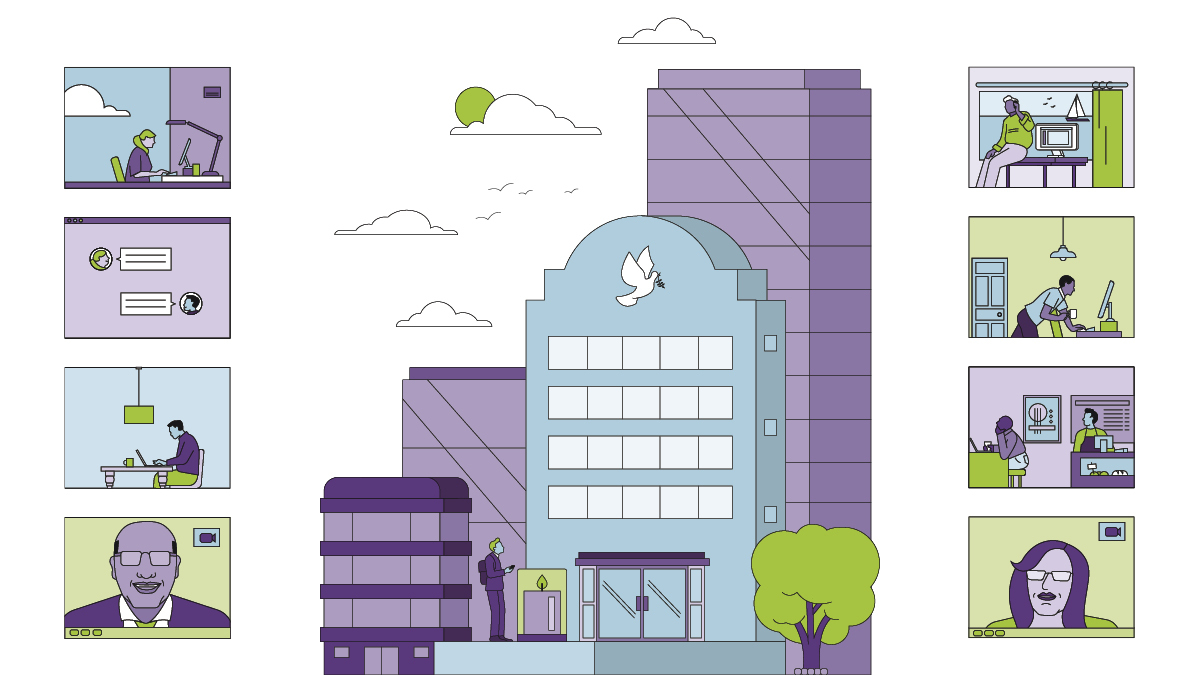 The office of the future looked very different five months ago. In January, Facebook announced plans to hire 1,000 staff members to fill their new £1-billion London HQ. But by May, the company had said half their future workforce will be permanently remote.

This is just one example of how the coronavirus pandemic has blown apart companies’ conceptions of “the office”. Barclays boss Jes Staley has said “the notion of putting 7,000 people in a building may be a thing of the past”, while Shopify founder and chief executive Tobi Lütke tweeted his company will become digital by default. “Office centricity is over,” he proclaimed.

Flexible working is nothing new. A survey of 229 organisations by US research firm Gartner found 30 per cent of employees were already working from home at least some of the time before COVID-19 struck. Since the pandemic began, that number has jumped as high as 80 per cent.

“I think that somewhere between 15 to 20 per cent of the workforce that was previously in a workplace will not be coming back,” says Rich McBee, chief executive of remote network performance specialists Riverbed. With this in mind, it’s hard to disagree with Lütke’s hypothesis, but if office centricity is over, what does that mean for the office?

The workplace in the age of flexible working

“A lot of the trends that were on the way anyway have massively accelerated,” says John Drummond, chairman of workplace strategy experts Corporate Culture. “We’re going to see several short-term, pragmatic changes and one is that more people will work from home.”

This could mean an end to the classic command-and-control method of working, especially as flexible working seems to improve employee productivity, specifically in Generation-Z staffers, 60 per cent of whom have become more productive during lockdown, according to a study by Milkround.

“I think you’re going to see flexible hours and output-based work versus hourly work,” says McBee. “What enables that is having at-office capability in your home office or from wherever you’re working.”

That means investment in connectivity and networks for those working flexible or compressed hours, as well as increased collaboration between employers and employees on the potential health pitfalls of remote working, such as burnout or back pain. Just last month, Google chief executive Sundar Pichai announced plans to provide workers with a $1,000 grant for at-home office equipment and furniture.

“The ‘individual cube’ of yesterday can be your home office,” says McBee. “It’s private, you’re working, you’re concentrated. Then, when it’s time to collaborate, the human-to-human interface will be done in a pseudo-office environment.”

Designing the office of the future

If the office of the future looked different five months ago, try ten years. From Google’s sleep pods to Apple’s on-site wellness centre, the old future office was designed for people spending all their time at work. Now organisations are having to rethink office design for employees who want to spend more time at home.

“Companies may choose spaces which are more about collaboration than focused work, so I think we might see a proportion of desk space decrease,” says Guenaelle Watson, managing director of office consultants 360 Workplace. “These spaces could become more agile, collaborative work areas programmed for different teams to use.”

With offices being reimagined as creative meeting spaces and most desk work being done remotely, technology such as Zoom and Microsoft Teams will be at the forefront of keeping the future workplace connected.

Microsoft chief executive Satya Nadella recently said his company has seen two years’ worth of digital transformation in two months; that’s because this digital change has been born out of adapt-or-die necessity, which will only continue to be the case in a post-COVID-19 world.

Thus, the need to return to hygienic workspaces will be one of the key drivers in digital workplace design. “We’ll see people not wanting to touch things in offices,” Watson explains. “That means the office, in time, may become contactless. You’ll be using voice recognition to open doors or apps to get yourself a coffee.”

In a world where the technology is improving every day, the physical space is becoming less and less important for forward-thinking and better-connected companies. Although meeting colleagues in a virtual reality office may still seem like a sci-fi concept, it’s not as far off as once thought.

“I think technology will get us to a point where that notion of physical location becomes a real question mark,” says Justin Westcott, European head of technology and chief operating officer for UK and Ireland at Edelman. “If you think about where we’re heading with 5G and latency, the doubling of performance in virtual reality in two years, while the costs half, that notion of the office increasingly becoming augmented is something I can see happening.”

Real estate and the digital office

“In a business like ours, our assets are our people and the office is the biggest overhead.” That’s why, when COVID-19 struck during early conversations about Edelman’s new London office, it was an opportunity for the company to interrogate what the modern workplace is for.

“There is always going to be a requirement for people to come together,” says Westcott. “Starbucks used to call themselves the ‘third space’ and I can see the office becoming the third space: you’re going to have your home, your home office and then the office.”

If the office does indeed become the third space, fixed desks could be done away with entirely, as could the traditional nine to five. “I think the notion of a ‘day in the office’ may be in question,” says Westcott. “It might be you come into an office for a ‘thing’, a task, a meeting, then you head out to wherever you want to get your work done.”

Yet with temporary providers such as Zipcube and Spaces becoming evermore popular with startups of the WeWork generation, many will ask if these lobby-like office spaces are merely precursors to a world without offices at all.

Unlikely, Watson says. “Not having an office at all would be difficult and you’d struggle to create a strong company culture,” she explains. “You can deliver the work from home, but it won’t fulfil the human need for interaction.”

Instead, Watson foresees two potential trends for those looking to reinvent their working environment in the flexible-working world. Organisations will either repurpose some of their desk space into collaboration or wellness areas, or they’ll opt to trade in one larger central headquarters for a number of smaller, perhaps regional, hubs.

Which fulfils Lütke’s prophecy, in its own way. Office centricity is indeed over, but the office itself isn’t dead quite yet.