Economic hostility and sanctions exchanged between the United States and China will impact development of reality technologies, with winners and losers on both sides of the trade war 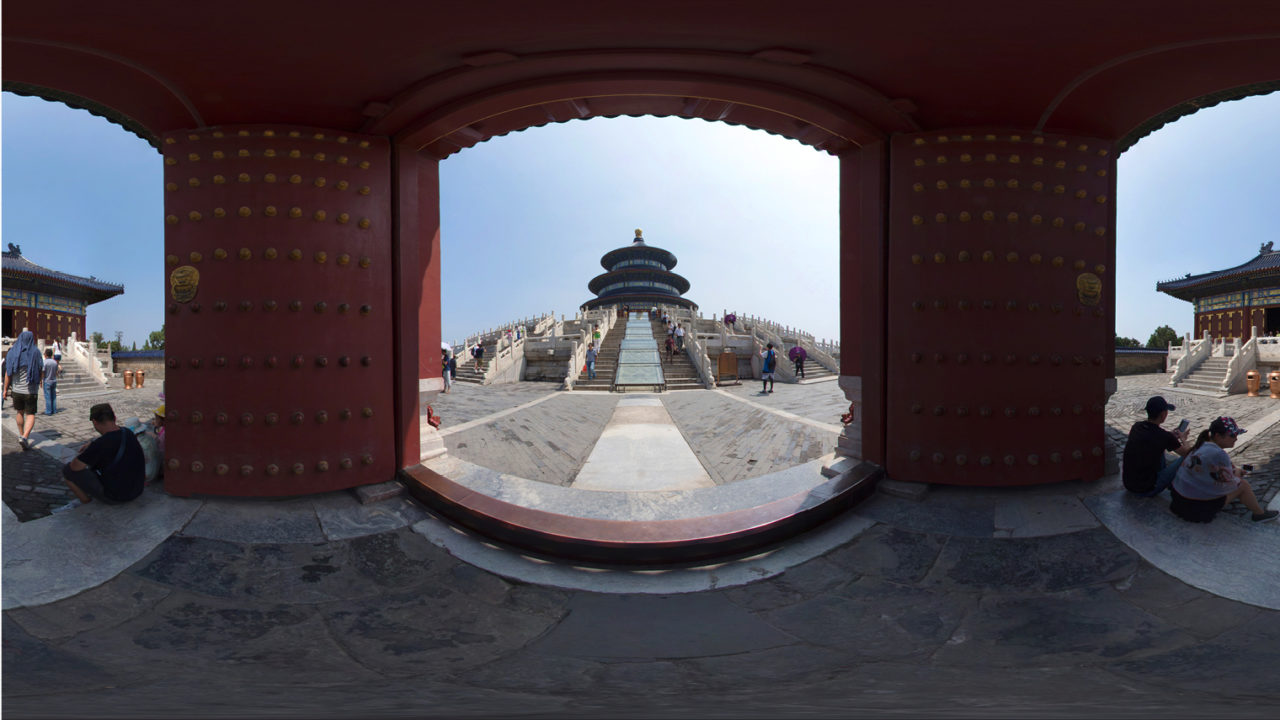 The ongoing trade spat between Washington and Beijing certainly makes headline news, but behind the ruffling of feathers over steel pipes, wine and pork, there’s a much bigger agenda. “What they are fighting is not really a trade war, it’s a tech war. A tech war is also a manufacturing war,” according to Terry Gou, chairman of Foxconn.

Chinese companies will develop core technologies, including XR, whether they get help from Silicon Valley or not

The Taiwanese electronics company should know; it employs more than a million workers, many in mainland China, and is a big supplier to Apple. These tensions have profound implications for the extended reality (XR) industries. Chinese investment in US tech firms has officially been soured as the Trump administration gets spikey over alleged intellectual property theft and unfair trade practices.

“Both the US and China see themselves as having a manifest destiny to determine world affairs, and perceive their economic and cultural outputs as crucial to shaping how the 21st century plays out globally,” says Tim Mulligan, senior analyst at MIDiA Research. “Technological innovation is a crucial strand in establishing global leadership.”

Chinese tech giant Alibaba among many who have invested in US

Alibaba, JD and Tencent are among the Chinese tech giants that have made big investments in America. Alibaba is of note having lavished hundreds of millions of dollars on ultra-secretive Magic Leap, a virtual reality (VR) startup that’s arguably had difficulty moving beyond its own hype.

“Magic Leap will struggle to continue development with the likes of Alibaba not being able to supplement their earlier investment rounds. This is true of other US-based AR [augmented reality] and VR ventures that have received speculative investments from China,” explains Mr Mulligan.

“However, money pumped into mixed reality companies are going to be subject to less US regulatory oversight than, say, investments in technology and telecoms infrastructure or back-end providers.”

You only have to look at the ban on US companies selling vital components to ZTE, China’s second-largest telecoms hardware provider, to realise this. Huawei is also banned in the United States.

China pulling investment from US XR companies bad for business

The numbers speak for themselves; in the first five months of 2018, overall Chinese investments in the US fell to their lowest level in seven years, a drop of 92 per cent, according to Rhodium Group. It doesn’t help that there’s been little or no return on investment from the nascent XR sector.

“Chinese companies don’t look at foreign investments with a huge appetite; it’s often more a vanity investment than core to their strategy. Chinese tech companies are more obsessed with local developments because losing their domestic market share is a much bigger threat at this stage,” says Shann Biglione, head of strategy at Zenith USA and former head of business transformation at Publicis Media Greater China.

Rhodium points out that the tightening of rules could have a chilling impact on Chinese inward investment into the US, including money moving into research and development, as well as other innovation-intensive activities. The trade spat has also led to a mad scramble in the tech sector before sanctions kick in.

“Device-makers are aware of the tensions. Faced with the rising uncertainties, some vendors have already begun increasing their production and exports early to fulfil the expected increase in demand in the coming Q4 holiday season, as well as in early-2019,” says Jason Low, Shanghai-based senior analyst at Canalys.

“The big issue is that China and its companies have to invest to stay ahead of the game domestically. XR is one of the top areas where the country has put in a lot of time and effort to create frameworks to streamline this development, as the industry requires key players from different areas, including hardware, network operators, content providers and developers, to work together.”

In the past, China’s tech giants have looked for US startups, which help them learn about new tech and cutting-edge trends emanating from Silicon Valley, as well as businesses that can complement their core e-commerce offerings at home. Their eyes are firmly on the main prize of making money out of China’s 900 million-plus, hyper-connected consumers.

“There is enough growth to be had in China. By 2020 you will have 600 million middle-class consumers and companies will sell an extra $2.3 trillion of goods each year by that time,” says Tom Goodwin, head of innovation at Zenith Media.

“At senior levels in Chinese corporations, they’re adamant that they don’t need help when it comes to tech. I’ve seen this time and time again. From Huawei to Alibaba to China Mobile to DJI. They are very clear they ‘have tech covered’.  It’s not arrogance; they just have total clarity on where their strengths lie, and they feel software and manufacturing are perfect for their skillsets.”

It helps that there are five million science and technology graduates in China every year and their competence levels are extraordinarily high. They also have huge markets to experiment in. Asia accounts for 59 per cent of the global population. How consumers adopt XR here today could be crucial to how it’s rolled out worldwide tomorrow. 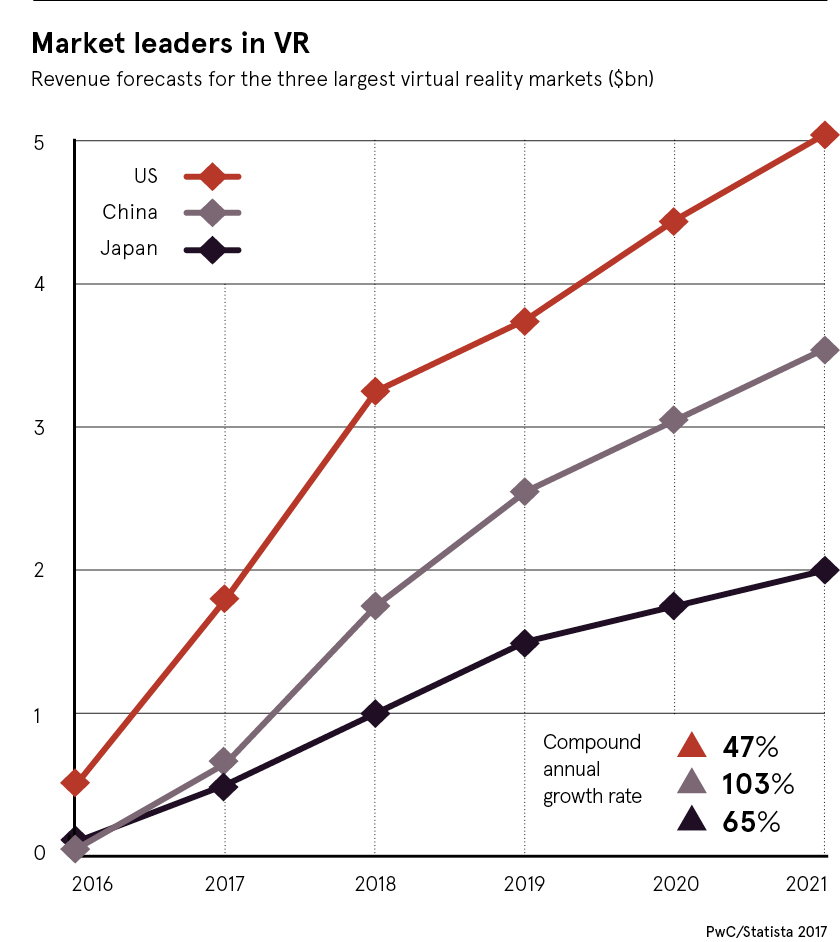 The leading Chinese tech companies are vast, but their Achilles’ heel is they conduct 90 per cent of their business within the country. Even so, such plans give Washington law-makers the jitters.

Without Chinese tech investment, US will lose out

By closing themselves off to China, America could lose out. Chinese companies will develop core technologies, including XR, whether they get help from Silicon Valley or not. They will also look elsewhere to invest and are likely to be welcomed with open arms. China is already active in many other countries and will increase this collaboration as it is increasingly frowned upon in the United States.

“Don’t forget that the reliance on Chinese capital in Europe is far more evident than in the US,” says Nick Cooper, executive director and global head of insights at Landor Associates.

“It is easy to overlook the fact that innovation is thriving in multiple locations around the world now. Not only on London’s own Silicon Roundabout and indeed Silicon Fen in Cambridge. This emphasises the UK’s lead in tech startups and investment within Europe. However, there are many other vibrant centres of tech excellence now, including Berlin, Stockholm and Helsinki, and elsewhere, such as Paris and Amsterdam.”

In many ways, being shut out of the US could be a boon for China. It will be forced to be more self-reliant when it comes to the XR sector and other tech developments, which it will incubate, grow, exploit and then export. Watch out.