E-commerce retailers are ramping up automation in their warehouses as they race to deliver goods to shoppers ever faster.

The smoother and quicker the journey between the customer clicking the online buy button and the delivery driver arriving at their door with the goods, the faster the retailer’s profits will roll in.

One way to speed up the picking and packing process is to reduce the number of miles walked by staff as they look for items on shelves in the warehouse.

Online grocery retailer Ocado has created a system called the Ocado Smart Platform where robots bring the shelf stacks to human workers, who pick out the right products and package them up to be sent out. These robots travel many miles a day at speeds faster than a human can walk.

Nathan Wrench, head of the industrial and energy business at Cambridge Consultants, which has worked on the Ocado system, says an early pioneer of the robotic “goods to man” warehouse process was KIVA Systems, bought by Amazon in 2012. They use a flat warehouse floor to bring shelves of goods to human pickers. 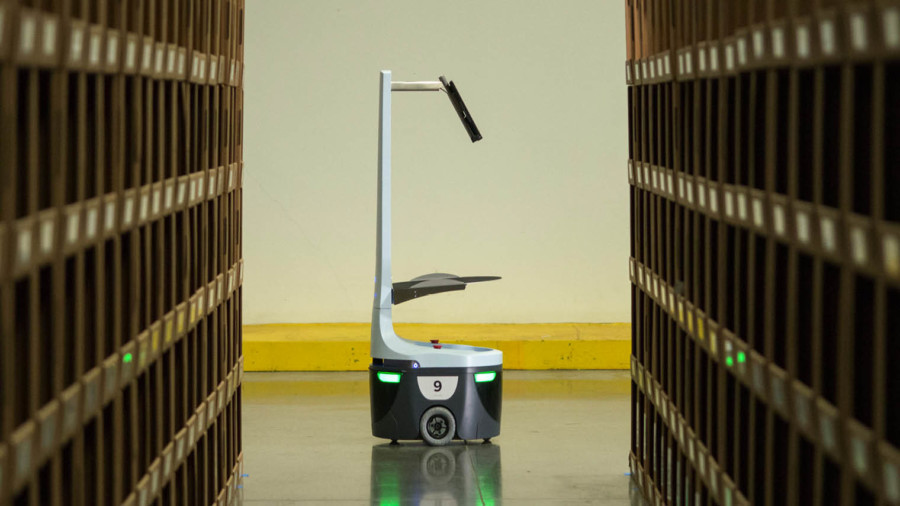 Mr Wrench says the system works well for a medium number of units and a low number of items for each delivery, so it is ideal for Amazon orders. But it would be less suitable for internet grocery shopping with complex orders of dozens of products compared with the Ocado system, he argues.

One of Ocado’s great hopes for the future is the introduction of “swarm robotics” technology at its new warehouse in Andover, Hampshire. Swarming allows multiple robots to communicate with each other to complete a common task. Paul Clarke, Ocado’s chief technology officer, says swarm robotics makes efficient use of space and of the robots’ capabilities “enabling us to pick a 50-item customer order in just a few minutes”.

Mr Clarke also points to the EU-funded SoMa project, which aims to design robotic hands capable of handling fragile objects without much detailed knowledge of an item’s shape. “The goal is to develop versatile, robust, cost-effective and safe robotic grasping and manipulation that could be deployed in grocery warehouses,” he says.

Warehouse automation is only possible because of the spread of sensor technology, with ultrasonic and visual sensors used to guide the robots

Warehouse automation is only possible because of the spread of sensor technology, with ultrasonic and visual sensors used to guide the robots.

Systems such as KIVA are relatively simple when it comes to environment-sensing. The robots follow a set of defined pathways, using waymarks from labels on the ground. As humans are excluded from this part of the warehouse, there is a lower risk of injuries. Other systems use ultrasonic sensors such as those in automotive parking.

A significant sensor technology for use indoors is LiDAR, which is a combination of light and radar. These sensors generate a three-dimensional image of an object using reflections from laser rays, and can be used to navigate and avoid obstacles.

Steve Richmond, director of logistics systems at Jungheinrich UK, says robots can help overcome the limited amount of warehouse space available for many retailers given the high cost of land. “One of the most popular options is to build racking higher and unlock available vertical space. This is where the use of automated systems is invaluable,” he says.

However, some believe the growth of warehouse automation is held back by nervousness about the costs of investment and the rapidly changing nature of the market. “Despite the hype, warehouse bots are not yet the norm,” says Alex MacPherson, solution consultant manager at Manhattan Associates.

One constraint is that many warehouses are converted mills and other buildings, so do not have a good shape to introduce robotics. “Retailers are definitely concerned that big investments in automation will not pay off,” he says. But he adds: “Now that we are all confident that e-commerce is here to stay, organisations are beginning to recognise the need to automate and we will see the implementation of new technologies accelerate over the coming years.”