The complication of taxing robots

The threat of mass unemployment at the hands of a robot army is a real concern. Robots are taking over jobs from cancer diagnoses to truck driving. And as the robots move in, humans get the boot. Perhaps worse, the taxman is robbed of the income tax the worker paid in.

Last year Microsoft billionaire Bill Gates offered a radical solution. He said: “Right now, the human worker who does, say, $50,000 worth of work in a factory, that income is taxed and you get income tax, social security tax, all those things. If a robot comes in to do the same thing, you’d think that we’d tax the robot at a similar level.”

Daft? Any idea coming from the (depending on stock prices) world’s richest man needs taking seriously. He admits it’s a tricky concept, but demands a conversation: “Exactly how you’d do it, measure it, you know, it’s interesting for people to start talking about now.”

Opinion is for it. A recent survey, by cloud accounting software provider FreeAgent, reveals 57 per cent of UK workers endorse a robot tax if a human is being put out of work. The research also shows 42 per cent of workers would be content taking orders from a robot boss. 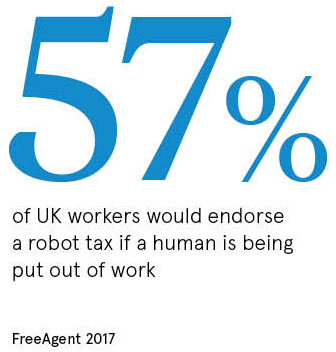 In 2017, South Korea introduced a robot tax. Incentives for automated machines were curtailed to make up for income tax lost due to unemployed workers, so more of a tweak, than a tax, but the principle was established.

The robotics industry is unimpressed. “A robot tax is as absurd an idea as a tax on pencils,” says Nigel Smith, managing director of TM Robotics, the sales partner for Toshiba Machine, the Japanese industrial robot manufacturer.

“The bottom line is that robots create jobs, they don’t take them away. The UK government’s recent Made Smarter review on digitalisation in industry concluded that over the next ten years automation could boost UK manufacturing by £455 billion, with a net gain of 175,000 jobs, while reducing CO2 emissions by 4.5 per cent.”

The problem is what do you tax? Tax experts aren’t sure. Paul Falvey, tax partner at accountancy and business advisory firm BDO, says: “It would be very difficult to create a robot tax as such because, in practice, robots are not easily defined or identified. This is probably why a robot tax is much talked about, but hasn’t been fully implemented.”

There are possible avenues. Mr Falvey says: “For example, should we tax a machine’s output? If so, how do you measure this? The rate of tax could perhaps be based on the cost of the labour that the robot replaced, but this would cause a number of further challenges, for example, humans have a finite lifespan, unlike robots.”

Perhaps a tax could vary according to the computing power of a robot. A pencil or teaspoon has no processor, so would be exempt. Ian Hughes, senior analyst at 451 Research, suggests: “If a system was to be put in place, it may need to be a performance-related levy based on how many compute cycles a task took, billed as a micro-transaction.” A neural network such as DeepMind’s self-learning AlphaGo Zero engine would incur a hefty bill.

A sectoral tax might work. Russell James, vice president of vision and artificial intelligence (AI) at Imagination Technologies, which designs graphics chips for smartphones, says: “Taking the example of an autonomous taxi fleet, imposing a tax on the company running the autonomous taxis could be an option.” He says the revenue could be used to retrain displaced workers to jobs in hard-to-automate sectors.

Perhaps the biggest obstacle is the danger a tax poses to productivity. The UK already lags rivals in terms of output per hour worked. A robot tax would make this worse. Furthermore, robots will automate unpleasant work and inefficient practices.

Neil Kinson, chief of staff at Redwood Software, an automation specialist, offers a strong example of this negative effect. “Take the example of the Heathrow Pods. The fleet of autonomous vehicles that deliver you to the business parking at Terminal 5 proudly claim to eliminate thousands of bus journeys. If we were to implement a robot tax on these vehicles, we would create a perverse incentive to sustain particle-emitting diesel buses, rather than zero-emission autonomous pods,” he says.

Against such difficulties, alternatives look more appealing. Helping those affected by automation is a front-runner. Dr Janet Bastiman, head of AI at StoryStream, sees the merits of this simple method. “If an individual is displaced by automation then they will need immediate reskilling to avoid long-term unemployment,” she says. “Any ethical employer will want to ensure that their workers are looked after, so maybe there is scope for legislation to ensure the companies pay for some training. Even this would be difficult to define in detail enough that it would not be subject to abuse.”

Having heard all the evidence, Dr Bastiman concludes: “Crippling innovation and progress through taxation is not the answer.” Workers may think otherwise, but the current view of experts across tax, AI and robotics is that a tax is unworkable and undesirable. Do not expect to see a robot tax anytime soon.