It’s no wonder modest fashion has been turning heads of late. An untapped global billion-dollar market combined with a host of social media influencers, has pushed styles into catwalks, catalogues and ad campaigns. As more major fashion brands get on board and it attracts more fashion-conscious women, the modest fashion industry looks set to only get bigger.

Modest fashion should compliment the diverse lifestyles of all types of women, no matter what their faith or culture

What then, is modest fashion? There are many definitions, but essentially it describes clothes that cover much of the body, without skimping on style. For modest fashionistas, it’s not what you show, it’s what you don’t show and, crucially, the way in which you don’t show it. The array of styles include dresses with high necklines and long sleeves, kimonos, head scarves, no-cleavage garments and looser fittings.

UK-based designer Saleha Bagas has been running her online modest fashion brand for the past five years. She says: “Everybody has their own version or level of modesty, but it attracts women who don’t want to show flesh just because it’s being advertised. Modest fashion gives the modern modest woman something she wants to wear, without her having to compromise on style.”

While it maybe emerging in the West, the industry has been catering to Muslim women in places like the Gulf, Indonesia and Malaysia for years, and sales figures suggest an increasingly lucrative global market.

Shifts are occurring across the industry. For the first time in its 102-year history, last year British Vogue put Somali-American model Halima Aden, its first woman wearing a hijab, on the cover. In 2017, modest fashion became the newest kid on the runway block with the first London Modest Fashion Week, where 40 designers from across the globe showcased their designs of turbans, hijabs, full-length dresses and burkinis.

Some of the biggest brands have also started to incorporate modest fashion into their collections, including DKNY and Mango, which have both launched Ramadan lines. H&M, Nike and Gap have also launched campaigns with models wearing a hijab, and the Net-a-Porter website features a modest fashion section. 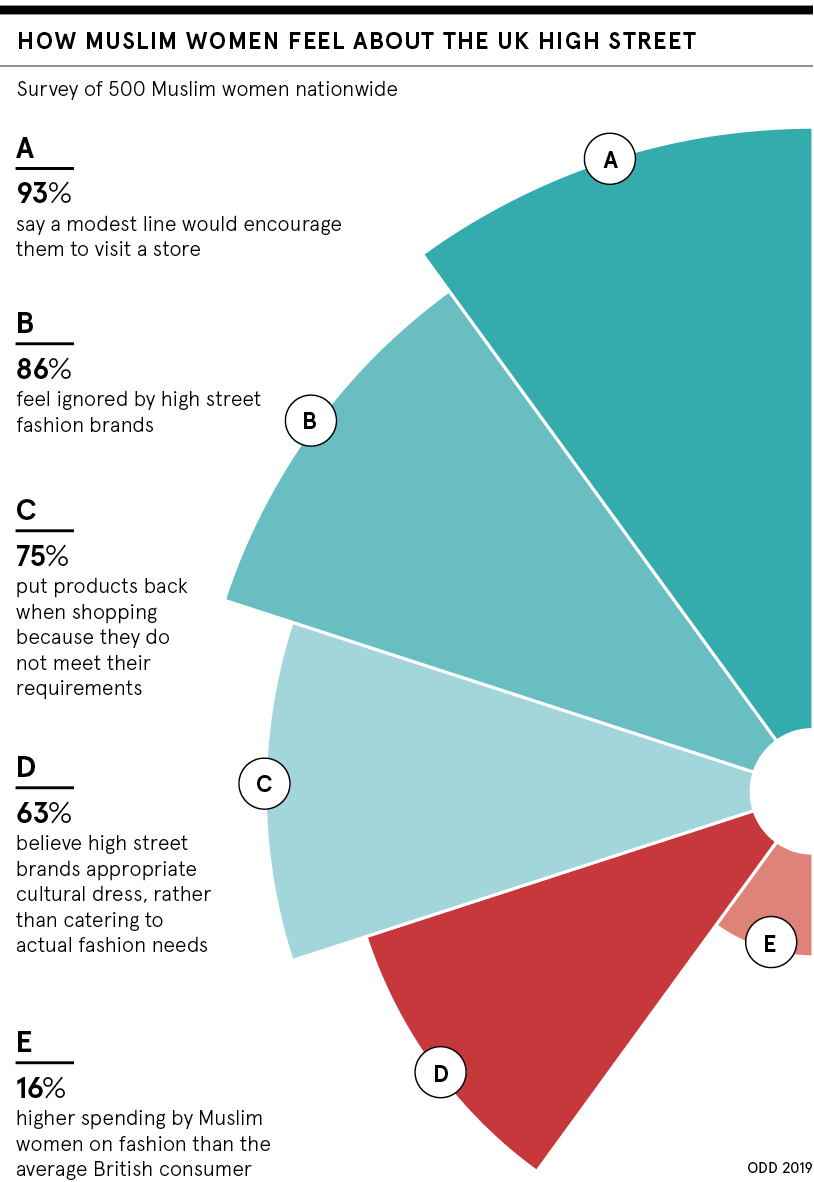 Kulsum Patel, director and co-founder of Ayah, a UK modest fashion consultancy service, says: “One thing that will always attract interest from businesses, brands and then, in turn, consumers is when you see large figures like this attached to an industry. Small businesses have been doing this kind of work for years, but it’s only now that big brands in the West are recognising there’s this whole catchment of women they haven’t tapped into yet. Now they are wanting a piece of the pie.”

Much of the push has come from social media influencers including British-Egyptian Instagrammer and YouTuber Dina Torkia. The 29 year old has spoken about the challenges she faced trying to balance her faith with her fashion, and in 2011 started her fashion blog. She quickly grew in popularity and now has more than two million Instagram followers and YouTube subscribers combined. Her tutorial on 20 different ways to tie an hijab has been viewed 1.2 million times and late last year she released her debut book Modestly on being a modern Muslim Brit.

Ms Patel says: “What you’re finding now is big brands like Amazon and John Lewis teaming up with these influencers to promote their products. These brands pay these influencers and then there’s a whole campaign that dominates their social media posts. The brands know there is a following out there and this is the best way to attract the industry and the modest woman client.”

But, as designer Ms Bagas says, modest fashion doesn’t just appeal to Muslim women. She says her designs – vintage gowns, long and baggy top-and-trouser sets and bridal wear – are popular with a range of women.

“My clients include Jewish, Arab women and non-Muslims,” she says. “Modest fashion is not just for Muslim women, it’s to complement the diverse lifestyles of all types of women, no matter their faith or culture, who want to implement modesty into their dress code.”

And it’s this wide appeal that’s putting modest fashion in style for all seasons.

Ms Patel concludes: “Choices for the modest women have always been there, but it’s never been created in a way where it is easily accessible for women in the West. It’s great to see big brands being more inclusive, but I think it’s going to take some time before they get the balance right. It is currently being identified with Islam, but the more attention it gets and the more mainstream it becomes, the more people will realise it’s not an alien concept. All I see is this industry growing.”