Finance tech puts CFOs in control of IT budgets

Finance departments are undergoing waves of disruption as new technologies transform their operations. From cloud computing and analytics to artificial intelligence, blockchain ledgers and robotic process automation, finance directors are wrestling with new ways of reporting on business performance and keeping tabs on spending.

The automation of finance raises questions about the role of the chief financial officer – will the CFO ultimately become the technology chief of the organisation? In this scenario, finance heads will be skilled and knowledgeable at implementing software that takes care of the all the complex financial functions they once studied so hard to master.

Abigail Draper, group finance director at environmental consultancy RSK International, believes the role of chief technology officer (CTO) sits comfortably alongside that of CFO, though much would depend on the skillset of the person undertaking both jobs and the demands of the two roles.

“If the business involved is very progressive in terms of IT and very demanding in finance capability, for example very acquisitive and growing rapidly, then you may need two officers with strong individual skillsets and capacity to deal with the workload. If the business is slower paced, then the roles could easily be filled by the same person,” says Ms Draper.

The greatest disruption to the work of the CFO comes when technology needs upgrading. “You are forced to take time out to deal with an upgrade and ensure it doesn’t disrupt the smooth running of the rest of the business,” she adds. 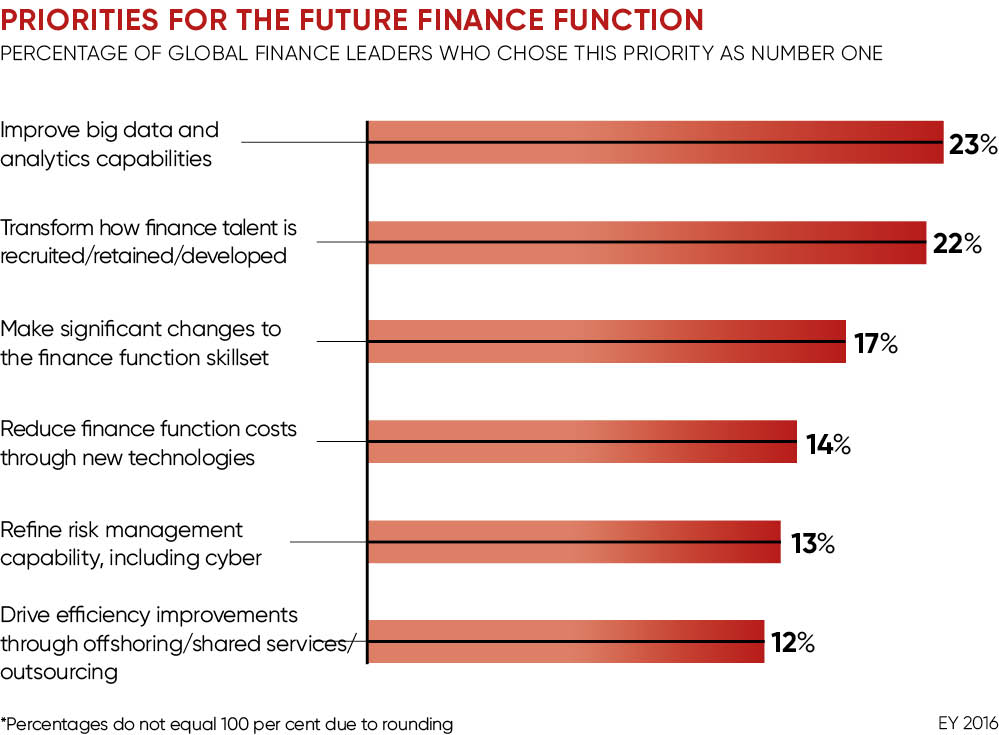 In some companies, the CFO already takes charge of the IT department. Stuart Marshall, group finance director of house developer Story Homes, has overall responsibility for IT, and works closely with the IT team and head of the department. “In a lot of businesses, finance and IT are natural fellows – both are closely involved with reporting on performance, and data collection and analysis. There are a lot of synergies between the two departments,” says Mr Marshall.

Ross Lacey, a partner at consultancy EY, says finance directors are excited about the potential for technology to transform the discipline. However, he adds: “People are still struggling with fundamental problems.” These include having archaic systems with data in silos and structures that make it unintelligible to them.

There is a proliferation of vendors entering the finance space offering smart, tactical solutions that plug into the existing technology, from payment applications to ways of run the fixed asset register.

In a lot of businesses, finance and IT are natural fellows – both are closely involved with reporting on performance, and data collection and analysis

“Increasingly, some of them really crack age-old industry issues that finance directors and CFOs struggle with. They just need to have the willingness to have multiple vendors plugging into their technology stack and providing some of this for them. It takes quite a level of sophistication for CFOs to manage that extended supply chain,” says Mr Lacey.

Many large, well-resourced organisations are making the most of these applications while small startups are also using the plug-in-and-play accounting and finance software.

But he believes many mid-sized companies with established systems struggle to use these applications as the companies have clunky enterprise resource planning software and lack the expertise in-house to be able to handle the new software.

There is little doubt that in the long term, finance directors will need to become evermore tech savvy as their role will get ever-closer to that of the chief technology officer.