Decisions to invest in developing and retaining talent are not just based on keeping employees happy, but on a cold economic rationale. Put simply, those businesses that can manage talent effectively are more likely to retain employees, so they reduce the cost of recruiting new staff as well as holding on to the knowledge and skills on which they often rely.

“There is a well-established link between costs of employee turnover and the bottom line,” says Christine Naschberger, associate professor of management at Audencia Business School. “Expenses include recruiting, orientation and training, lost productivity and even lost customer satisfaction.

“There are also intangible costs, which may be even more significant than the tangible ones. These involve the effect of turnover on employee morale, organisational culture, social capital, the company’s reputation and organisational memory. For example, some remaining employees may have to take over work from the person leaving, which may lower employee morale and cause conflict and dissatisfaction.”

Then there’s the time it takes those tasked with recruiting to do so. “The company must take into consideration internal recruitment expenditure, including HR’s and managers’ time to interview and screen candidates,” says Janette Marx, chief operating officer at oil and gas recruiter Airswift. “Businesses also need to understand the upfront cost of advertising the role or using an external recruitment firm as well as potential relocation expenses and sign-on bonuses.”

The cost of recruitment

In all, a report by Oxford Economics in 2014 estimates the true cost to replace an employee is more than £30,000.

Emma Bridger is founder of People Lab and contributes to the government’s Engage for Success initiative. She believes those who are responsible for recruiting and retaining talent need to measure the financial impact turnover can have in their own business, to help make the case for investment in employee engagement initiatives.

“The figure can be a wide-awakening moment for many CEOs,” she says, suggesting it’s advisable to enlist the support of the financial director. Factors to consider include the cost of training and onboarding, the recruitment process itself, including the time taken to travel to meetings, and the inevitable cost of lower output while new recruits get up to speed.

But not everything can be calculated, warns Graeme Paxton, sales director of talent management firm RTM. “Where it gets complicated is in assessing the hidden costs like dual-manning, mentoring, intellectual property, lost time, opportunity costs and the impact on business culture,” he says. “It’s also pretty challenging to assess the cost implications of specific job roles; someone in a customer-facing position brings added value because of the loyalty and relationships that lie with them, but how can that be quantified?” 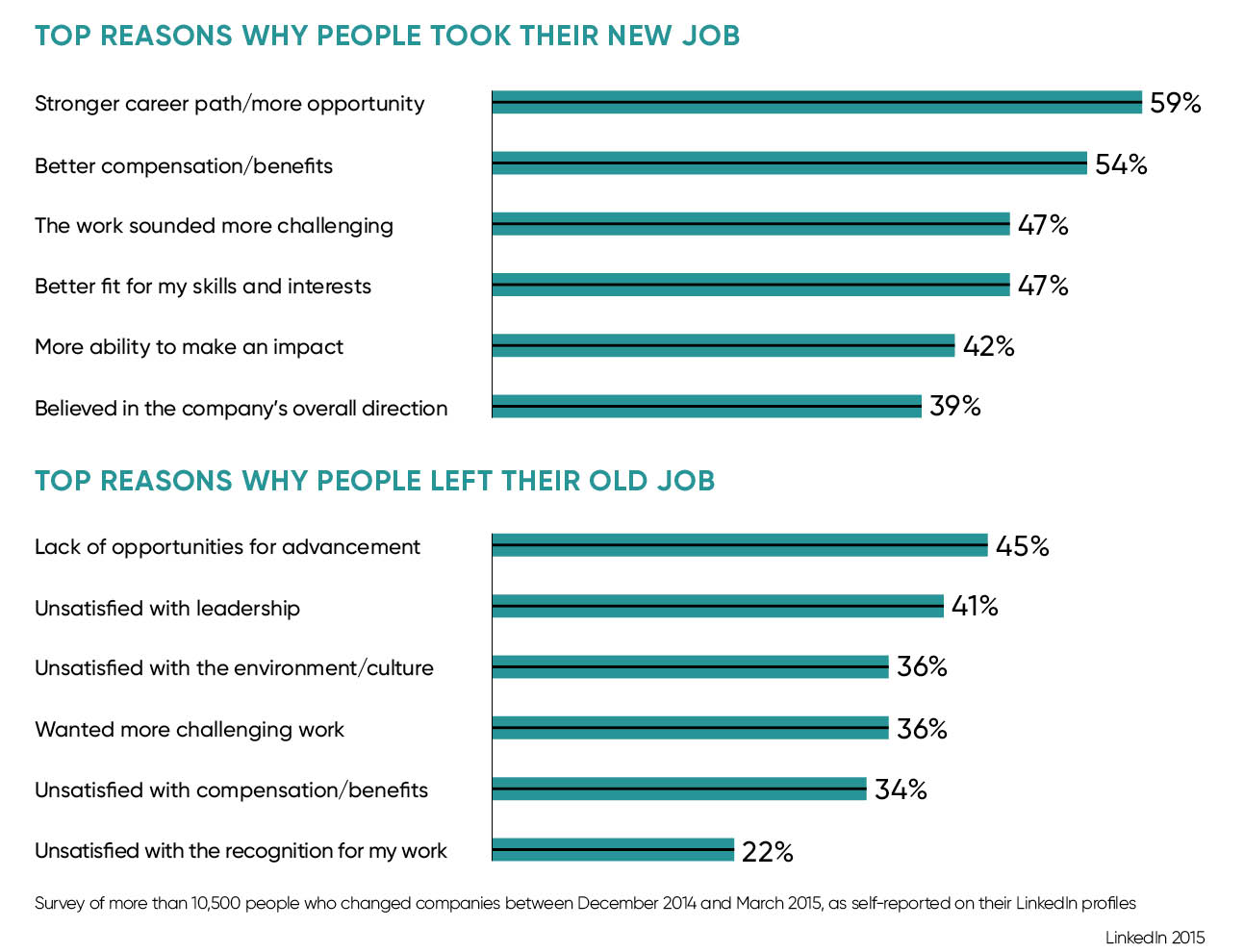 Once businesses understand the cost of losing people, they will be more motivated to do something about it. According to a recent study by the Futurestep division of Korn Ferry, a common reason why people choose to move on is feeling they are not doing a job with meaning and purpose, cited by 73 per cent of respondents, compared with just 3 per cent who pointed to pay.

A perceived lack of progression is also often a factor, highlighted by 45 per cent of people in a recent LinkedIn survey of more than 10,000 people. Paul Modley, director of diversity and inclusion at Alexander Mann Solutions, gives the example of working with Santander to create more opportunities for internal job moves.

“They realised existing processes were not encouraging the level of internal mobility both the business and its staff would like, and implemented a new personalised internal mobility process that increased engagement with employees,” he says. “In just ten months, internal hires increased by over a third.”

Offering the potential for people to develop is particularly important in certain sectors, such as digital, where the battle for talent is intense. “Investing in strategies that boost employees’ digital capabilities is a great starting point,” says C.J. Morley, global director for talent and development at iProspect, which recently launched its NEXTGEN global development programme. “This not only boosts engagement levels among employees, but also helps to entice younger prospective talent.”

Alongside career development, there are other essential ingredients when it comes to retaining talent. Employee engagement firm Purple Cubed runs an annual engagement study with more than 10,000 employees in the UK, asking them what makes a great place to work. “For the last two years, the findings have revealed that being respected, getting results and work-life balance are the top three ‘must-haves’,” says Jo Harley, managing director. “In organisations where these areas weren’t met, businesses suffered high levels of employee disengagement and a higher risk of employees leaving within six months.”

These findings were borne out in ADP’s recent Workforce View study of more than 11,000 workers across Europe, which found the three main factors in motivating people were a good work-life balance (29 per cent), the ability to work flexibly (26 per cent), and a diverse and fast-moving role (24 per cent).

“These are all things that HR can implement without huge costs,” says Jeff Phipps, general manager at ADP UK. Managing stress levels is also becoming increasingly important; 44 per cent said they regularly experienced stress and 5 per cent said this was so bad they were considering leaving their employer.

If staff do want to move on, a one-to-one exit interview should be held at the point when they are about to leave, says Jemma Terry, managing partner at Odgers Berndtson. “It is important they feel able to be open and honest about why they are moving on, and how things could change, to retain others in the same situation in future, if appropriate,” she says.

Yet there can be times when it’s in everyone’s interest for people to move jobs, to ensure people do not become stale and new ideas can infiltrate the business. “I like to use an analogy for this,” says Matt Wood, human resources director of brand and marketing consultancy CAB Studios. “If you’re changing the water in a fish tank, you can’t take out too much of the old water or the fish will die as their environment becomes unstable and unfamiliar. Equally if you never change that water, the fish will also die as their environment will stagnate. It’s about introducing just the right amount of fresh water so the environment remains healthy.”

‘Can’t get no satisfaction’

Employees in the UK tend to be less satisfied with their jobs than workers in many other countries, according to LinkedIn’s Work Satisfaction Survey. The research found only 40 per cent said they felt “very” or “completely” fulfilled at work, compared with 56 per cent in Germany and 52 per cent in the United States. The percentages of those who would be open to another job if approached by a recruiter were relatively consistent at around 75 per cent.

Having good relationships with colleagues is important for UK workers, ranking as the most important factor in feeling fulfilled at work, alongside salary (both 49 per cent). Those in Canada (57 per cent), the US (53 per cent) and Australia (49 per cent) also value this, but this is less of a factor in countries such as Germany, the Netherlands (both 38 per cent) and Singapore (25 per cent).

Attitudes to salary vary. This is a big factor in the US and Canada (both 59 per cent) and France (51 per cent), but is only important to 35 per cent in the Netherlands and just 21 per cent in Singapore.

Work-life balance is highly valued in the UK, with 38 per cent rating this as an important element of a job and 65 per cent saying they would be prepared to take a pay cut to have a better mix.

Being happy at work is particularly important to workers in the Netherlands where 91 per cent would be willing to reduce their pay to achieve this, compared with 85 per cent in Singapore, 77 per cent in France and 76 per cent in Germany. This is less the case in the UK, although 58 per cent said they would take a cut in salary to be more content in their job. 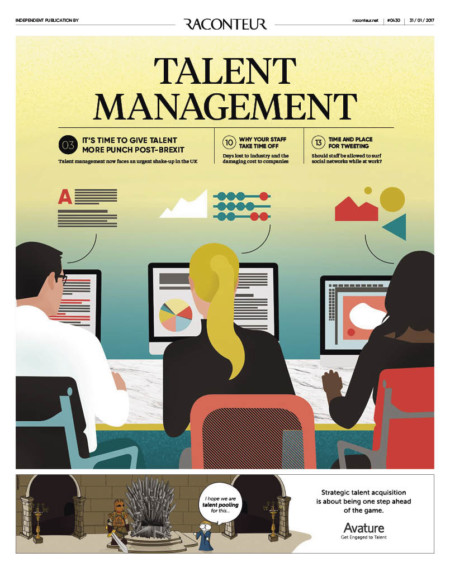