Almost a quarter of a million cash-strapped NHS workers have quit their gold-plated defined benefit (DB) pension scheme to boost their take-home pay by a fraction of the value of the benefits they are surrendering. A Freedom of Information request by the Health Service Journal found 245,561 staff had opted out of the NHS pension scheme in the last three years, forgoing benefits worth up to nine times the value of their NHS pension contribution. The figure represents around 16 per cent of active members of the scheme, according to calculations from pension provider Royal London.

Experts say a combination of financial pressures is driving staff to take the drastic step of opting out of their DB scheme, with a decade of zero or below-inflation pay rises, increased employee contribution levels and a climate of negativity around pensions all blamed for the exodus.

Why are workers opting out of the NHS pension scheme?

A typical nurse on £25,000 a year can save £1,420 in employee contributions by opting out, but will lose pension rights worth around £13,000 because they will also miss out on the significantly bigger employer contribution into the scheme.

Opt-out levels are considerably higher in the NHS scheme than in other public service schemes, risking an epidemic of poverty in retirement for nurses, doctors, consultants and other health service staff. Just 3.4 per cent of members have opted out of the teachers’ scheme, while 1.45 per cent have left the civil service scheme and 0.04 per cent have opted out of the Armed Forces scheme.

Sir Steve Webb, of Royal London, who served as pensions minister in the 2010-15 coalition government, says staff have been hit by a “perfect storm” of factors driving them to dropping their NHS pension. He says: “NHS workers have suffered a decade-long pay freeze, an increase in contributions following the abolition in contracting out and a contribution policy that sees higher earners pay a higher percentage than lower earners. This creates cliff edges where people can find their contributions soaring just because they got a pay rise.”

Disillusionment with public sector pensions on the rise

Colm Porter, national officer at Unison, the union that represents healthcare workers, says another problem causing staff to opt out is the “all-or-nothing” nature of the NHS pension scheme. Local government workers are able to opt to buy half contributions into their scheme, to enable those who cannot afford the full contribution to be able to participate to a lesser extent. But this option is currently not available to NHS staff, who must opt out altogether if they are not prepared to make the full contribution, although Unison is pushing for it to be introduced.

Mr Porter believes that a broader disillusionment with public sector pensions, following increases in employee contributions and retirement ages, has contributed to an atmosphere of negativity towards what remains a very attractive benefit. He believes the NHS could do considerably more to educate staff about retirement saving and communicate the value of the benefits the scheme offers to members.

“It is true that the NHS scheme is not as generous as it was when it was changed in 2015, but it is still very generous compared with the pensions offered to most other workers in the UK,” he says. “It is a shame to see so many NHS staff putting their retirement plans at risk by leaving the scheme.”

Mr Porter says a big step forward in helping NHS staff in England and Wales better appreciate the value of their NHS pension would be the introduction of an online pension modeller, which would enable them to visualise the value of the benefits they accrue and the contribution made by the employer. The NHS  pension scheme in Scotland and the Local Government Pension Scheme already offer such a tool on their website. 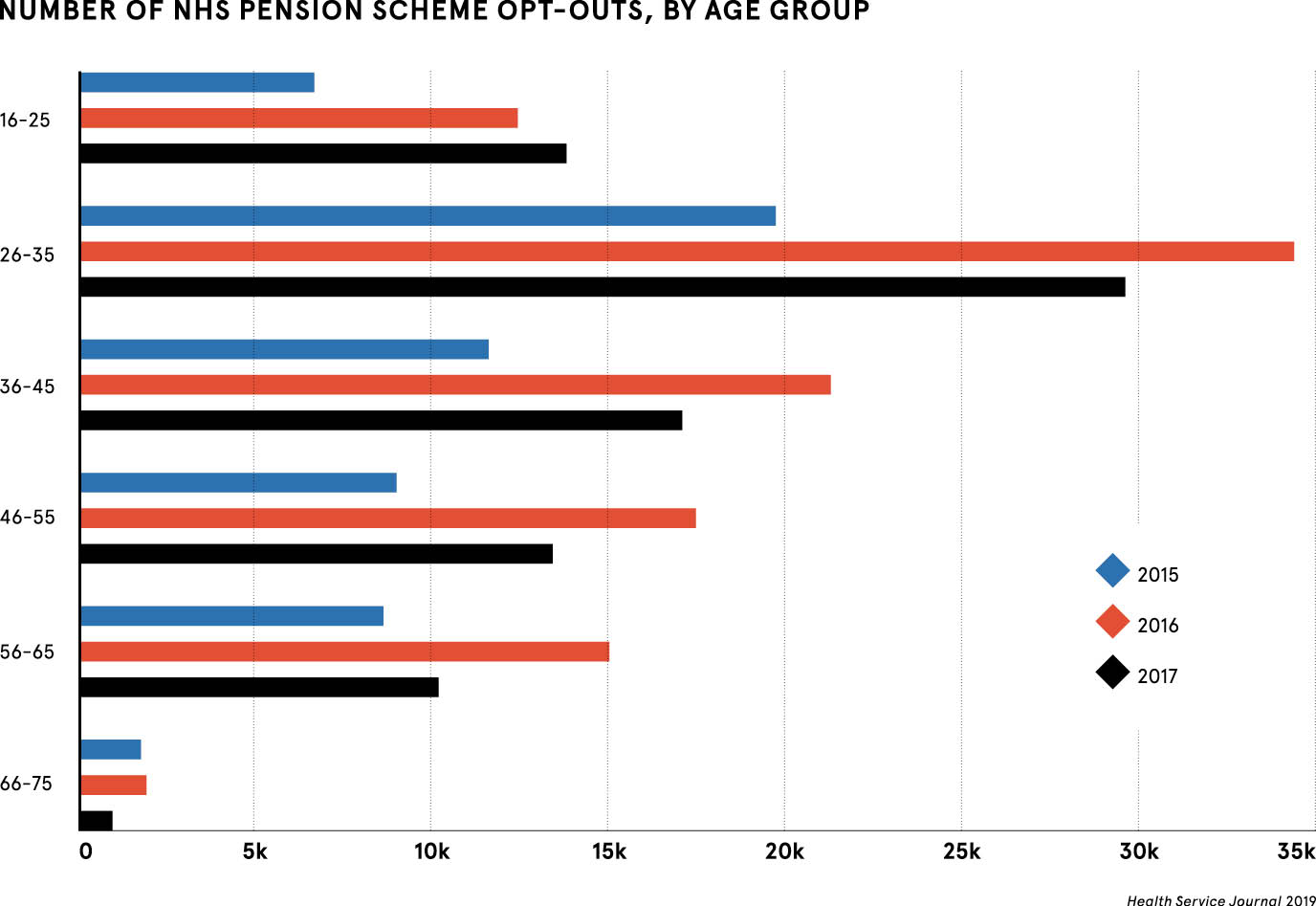 What is the future for NHS pension schemes?

Staff perceptions of the NHS pension scheme could start to improve from April when members’ benefits may be increased following a statutory review of its funding level. A mechanism known as the cost cap, which was implemented in 2015 to control unexpected changes in pensions, requires the Government Actuary’s Department to assess whether the scheme is under or overfunded.

Union officials say the scheme is expected to be assessed as being funded beyond the cost cap because mortality improvements have not been as great as had been predicted. Such a finding would mean predicted payouts to pensioners will be lower than have been accounted for to date. The government has two options for bringing the scheme back within the cost cap: reducing employee contributions or increasing the benefits accrued by members each year.

Mr Porter says he expects the Treasury to opt to increase benefits that will be received decades into the future rather than reduce employee pension contributions it will receive today.

The group of staff with the highest level of opt-outs is those aged between 26 to 35, which includes many staff in lower-pay brackets. But some typically older high-earning medical staff, including GPs and surgeons, have also been leaving the NHS pension scheme because they have hit HM Treasury’s £52,750 a year DB pension lifetime allowance, so they are no longer entitled to tax relief on contributions. The lifetime allowance is £1.055 million for defined contribution pension savers.

Earlier this month, health secretary Matt Hancock petitioned the Treasury to lift the lifetime allowance for GPs, according to an interview in Pulse, a trade publication for doctors. Mr Hancock blamed the limit for contributing to staff retention problems in the sector, with some GPs retiring early. However, the Treasury has not given any indication that it will carve out an exemption to its pension taxation rules for public sector medical professionals.

What will happen to opt-out rates?

The flood of public sector staff leaving gold-plated defined benefit pension schemes has highlighted the dilemma all workers face when asked to meet the cost of providing for  their retirement.

Increased longevity and historically low interest rates have pushed the cost of securing a retirement income to astronomic levels. An annuity of £3,000 that increases in line with the retail price index would cost a healthy 65-year-old non-smoker £100,000 to buy.

Since 2012, automatic enrolment has brought almost ten million new workers into pensions. So far, opt-out levels have been lower than pundits had expected. Latest figures from the Department for Work and Pensions show 4.2 per cent of 22 to 29 year olds and 7.6 per cent of 50 to 59 year olds had opted out by June 2018.

Some experts predict opt-out rates will increase when minimum employee contributions increase from 3 to 5 per cent of earnings between £6,032 and £46,350 from April, when employers will be required to pay a further 3 per cent.

The Pensions and Lifetimes Savings Association says a total of 8 per cent of band earnings is inadequate and is calling for a minimum combined contribution of 12 per cent of all earnings. Such a contribution level would still leave private sector workers short of final salary benefit levels, but would be likely to lead to a greater number of opt-outs. 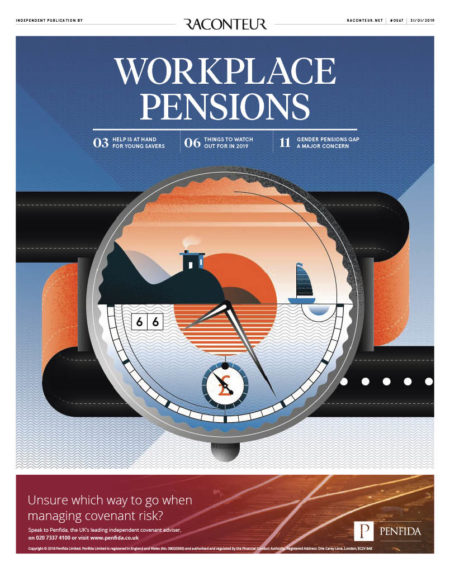