In today’s social media-saturated, consumer-obsessed business environment, a deep understanding of customers, an eye for creativity and a penchant for bold strategic thinking are among the skills necessary to become a captain of industry.

That’s why the UK’s biggest companies are increasingly hiring chief executives (CEOs) with a background in marketing. Tesco, Halfords, BT and Direct Line have all chosen bosses that have served as marketers. This challenges the traditional wisdom that the best route to the top in UK plc is through a career as a finance director or general manager.

Research by recruiters Spencer Stuart shows that in 2016 some 20 per cent of CEOs at FTSE 100 companies started off their careers in marketing or had worked as a chief marketing officer (CMO). This was true for 18 per cent of Fortune 500 CEOs and 24 per cent of private equity bosses.

Finance directors and general managers still made up nearly half of all FTSE 100 CEOs, but the rise of the marketer as chief executive is notable. As Spencer Stuart technology leader Grant Duncan says: “This shows there is real value in having a marketing background if you want to make it to the top.”

Successful marketers have a canny understanding about the likes and psychology of customers, and they develop a second sense about what excites, impresses, scares and satisfies consumers. They have sensitivity to creativity lacking among many senior executives. And many of them are renowned as big-picture thinkers rather than cost-cutting bean counters. That is a benefit for consumer-led businesses with an eye on growth. 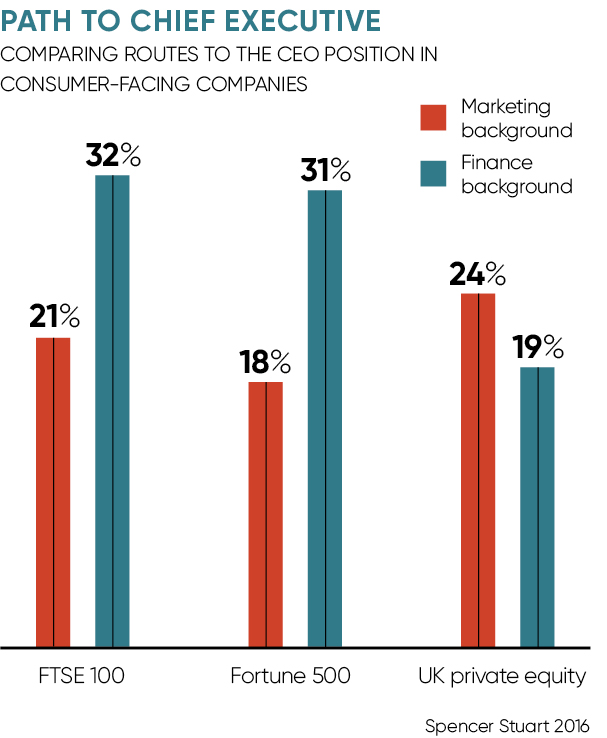 But top bosses also need to be financially astute. Leading a big business can test the financial and accounting mettle of any CEO. Tesco chief executive Dave Lewis spent more than 25 years at consumer goods firm Unilever as a marketer and a general manager working on brands such as Lynx and Dove. But when he arrived at Tesco, the first thing he found was a massive financial black hole which he spent years trying to resolve.

BT’s CEO Gavin Patterson, a former marketer at Procter & Gamble, has had to cope with a huge accounting scandal at the telecoms company’s Italian business, which has knocked profits. A career spent in marketing is not necessarily a strong preparation for the minutiae of handling complex financial accounting.

That said, Gregory Webb, CEO of online security giant Bromium, believes a background as a senior marketer often provides extensive experience of running big budgets. CMOs also work closely with finance directors, so are familiar with financial decision-making. Mr Webb joined Bromium as CMO in June 2016 and a few months later the company founder persuaded him to take on the CEO’s role. He was initially reluctant, but then realised it was an ideal fit.

And Suki Thompson, CEO of marketing consultancy Oystercatchers, says: “Today’s marketers are more technologically literate, they typically have profit and loss responsibility, they might have a commercial aspect to their role, they become heavily involved in the digital side of things, and in the consumer journey. Therefore, a good CMO has broad skills and they are easily transferable.”

Training in marketing can be a rung on the ladder to running some of the UK’s top businesses. For example, another marketing director who has made it into the CEO’s office is Jill McDonald, a British Airways marketer who became CMO then CEO at McDonald’s before moving on to Halfords as chief executive. She is now joining Marks & Spencer to head its clothing business. But this was not always the plan. As she says: “I didn’t set out to become a CEO. I wanted to be a CMO.”

Paul Geddes, chief executive of insurance giant Direct Line, started his career as a marketer at Procter & Gamble working on brands such as Pampers and Max Factor. He later became marketing director of electricals chain Comet, then of Argos. He was appointed CEO of Direct Line in 2009.

Mr Geddes believes that ambitious marketers face a choice either to become a chief marketing officer at a large global company or CEO of a smaller business.

“Great CMOs are rare and highly valuable to companies,” he says, arguing that marketing is a strong training to become a corporate leader. To land the top job, marketers need to be able to persuade the chairman of a large business that their background and training makes them an ideal choice for the role of chief executive,” he says.

“Businesses led by people inherently close to what customers want now and in the future can deploy the full resources of the company against these needs. These companies should, over time, outcompete those who allocate resources otherwise.

“The best marketers are inherently collaborative generalists who are used to blending different disciplines and reconciling different objectives and timeframes – key components of the CEO role.”

And he adds: “A key role of the CEO is to market the company to employees, investors, regulators, governments, partners. Marketers are very good at this.

“I think there is no finer business education than marketing and I’m confident the FTSE CEOs from our profession will continue to grow.” 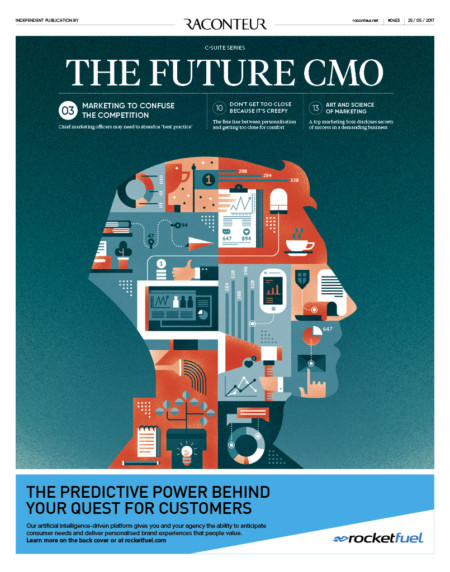