When Reveal at the Center for Investigative Reporting decided to dig around the diversity data in Silicon Valley, some organisations pushed back.

Data-mining company Palantir argued that publishing the one-page document, which all companies with 100 or more employees need to send to the US federal government each year, known as EEO-1 reports, would put them at risk of having their diverse talent poached by competitors.

Yet when they were forced to publish their 2015 diversity numbers after a public records battle, it turned out they in fact had no female executives and only one woman, who was white, among its managers. Both Oracle and Pandora offered up similar reasons to not publish their EEO-1 reports as they fought to keep their diversity statistics a secret.

Millennial talent looking for diversity in their workplaces

The reality is that these companies were scared of what the data would say about them. Silicon Valley is known just as much for its difficulties with diversity as it is for technology and it’s an issue that isn’t going anywhere. Many tech giants, such as Apple, Facebook, Uber, Google and Amazon, have accepted this and already release their EEO-1 diversity numbers publicly.

With the focus on diversity intensifying, companies burying their head in the sand are in for a rude awakening. Instead of fighting the inevitable and trying to cover up homogenous working environments, forward-thinking businesses are looking at how to embrace the future and strengthen not only their workforce, but also their brands, which will help them to continue attracting the best people to jobs.

Fed up of consistently being the only black woman in the room, Kike Oniwinde started the BYP Network to help connect talented black young professionals for networking and career opportunities.

“Millennials are big on diversity and inclusion,” she says. “They aren’t keen on working for firms that aren’t diverse so those places are missing out on this young talent.”

This prioritisation of diversity isn’t just limited to millennial employees from minority backgrounds. According to the Institute for Public Relations, 47 per cent of millennials in the United States cite diversity and inclusion as important factors in a job search. In short, if companies want to attract the best people, they will have to prioritise diversity too.

The fallout of #MeToo, the gender pay gap and a rising social awareness around issues affecting minority groups has put a spotlight on our attitudes in the workplace. Compulsory unconscious bias training and sessions around behaviour at work can be uncomfortable, but their prevalence in recent years show that things are moving in a new direction. So how can managers really improve their environments long term?

The answer lies squarely in hiring and retaining the best talent from a variety of backgrounds. According to a HackerRank survey in 2017, hiring managers’ top priorities are the right skills and culture fit (80.5 per cent), future performance (50.6 per cent) and retention (37.8 per cent).

The issue is that managers who continue to recruit in their own image and remain focused on potential employees being a “cultural fit” will find their pool of talent to be limited and the culture of their working environment similarly constrained. To build dynamic teams with fresh ideas, managers need to remain open to things they aren’t familiar with. 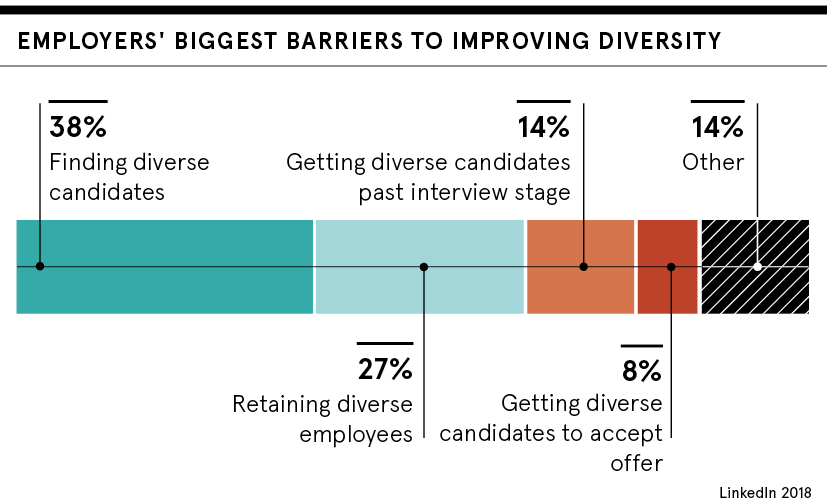 Liz Johnson, who won a gold medal during her career as a Paralympian swimmer and last year launched a recruitment consultancy The Ability People to promote diversity, doesn’t think that the sidelining of certain demographics is necessarily intentional.

“There’s a completely untapped pool of people who were being completely ignored because people make assumptions,” she says. “Quite often people live in their bubble and until you come across different people, they aren’t on your radar; you just don’t realise they are out there.”

Ms Oniwinde cites this as one of the factors that has affected Silicon Valley. “In the tech world, this happens a lot because of the rapid expansions, because they want  to grow so quickly, they aren’t looking beyond their networks,”  she explains.

Getting a diverse pool of applicants is just the first hurdle. More than half of disabled adults in the UK are unemployed, compared with just one in five non-disabled adults, according to a 2017 study by the Equality and Human Rights Commission. In many cases it’s not their ability to do a job that holds them back, but different barriers to conventional working environments; barriers that employers could help to alleviate.

“More and more organisations are finding the benefits in flexible working, working from home or in other locations,” says Ms Johnson. “We don’t prescribe any working hours for our staff. They are given roles to work on and tasks to do; we trust that because they are committed they will get it done.”

Mario Debout, who heads up Robin des Bois, an international commercial agency in Austria’s capital Vienna, says: “What we clearly say in our hiring process is that it’s less about the culture, it’s more about the values that matter to us. If you want to go global as a company, you need a global team; every employee you bring in has their network in their country of origin.”

He concedes, however, that having a diverse workforce has presented its challenges. “At the beginning, we had to grow quite fast and I think I underestimated the language barrier. I thought because we are all creatives and everything we do is visual that in the end it would all sort itself out, but it’s not the case,” says Mr Debout.

If organisations really do want to create long-lasting cultures that serve to maximise productivity and attract the best new talent, it will require creating processes to support employees. Mentoring, flexible working and extra training take time, money and resources, but companies can’t afford not to take steps towards the future if they want to exist in it.