It’s an all too familiar picture. “I’ve literally lost count of the number of times I’ve been the only female on my team,” says Val Agnew, global account director at Verizon Enterprise Solutions, who was formerly a regional and global sales manager with BT.

Some might say it’s hardly surprising as technology is structurally male dominated, so for any function within it, female numbers lessen even further. As research by LinkedIn shows, IT has one of the lowest percentages of women in sales – 25 per cent compared with 50 per cent in media. But others argue there’s something more pernicious that because sales is broadly still a statistically male profession, there’s inherent hiring bias. Men hire more men because that’s what they know.

“Sales is still very much a boys’ club,” concedes James Montgomery, Verizon’s human resources director for Europe, the Middle East and Africa. “It’s an industry problem, which is why we’ve decided to make a conscious effort to address it. We have a staff referral system, where staff can introduce friends to the business, but we specifically don’t allow this in sales because the laddish, mates-club reputation sales has needs to be broken.”

According to Mr Montgomery, not intervening is no longer an option and it’s only by committing to have diversity high on the agenda that practices change. He runs training for managers to counter unconscious bias and accepts recruitment will take longer to find more women candidates, a strategy he calls “having diversity intent, rather than positive discrimination”.

Afi Ofori, who runs the Women in Sales Awards, says: “We phone up companies who say they don’t have any women, but they don’t know why, yet to me the answer has to be that men, whether deliberately or not, do stick to a group-think mentality.”

One problem Ms Ofori does accept is that firms also tell her they can only hire who applies to them in the first place, so any gender debate needs to look at the role recruitment agencies play in presenting more female talent, but also the perception of the sector to begin with. However good the intent, firms can’t hire if the talent isn’t there.

“The stereotype of the pushy car salesman still exists, meaning girls at school don’t see sales as something that attracts them,” says Ms Ofori.

Denise Bryant, group managing director at the Association of Professional Sales, says: “Sales per se needs to be seen as a more professional career to begin with. We’ve developed accredited level 4 to 6 apprenticeships schemes for this very reason. Through professionalism sales then ceases to be a gender problem, helping all, but particularly women.” 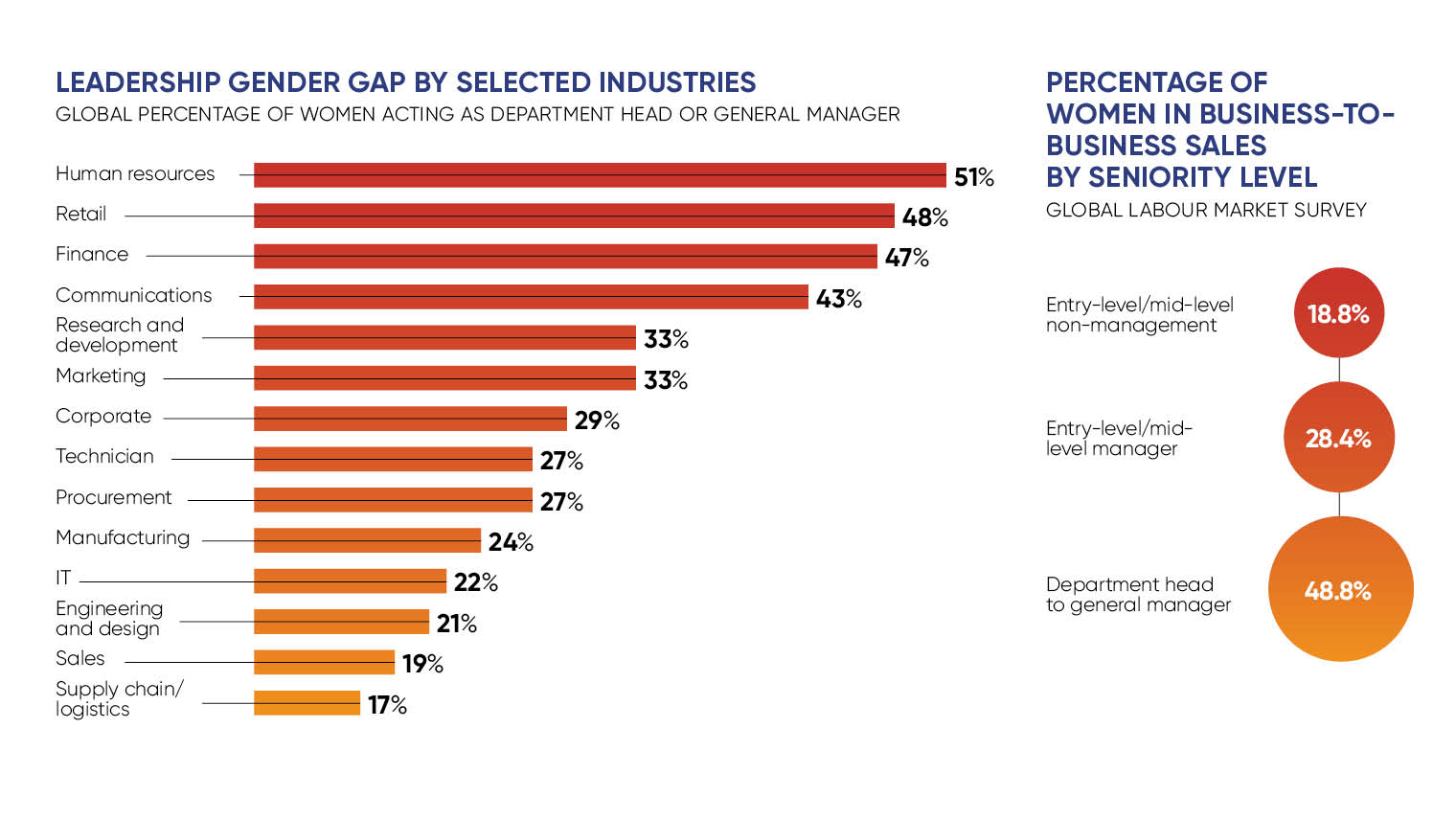 There’s no reason to suggest women, once in sales, won’t thrive. Research proves women demonstrate higher emotional intelligence. “Customers have changed, they already know about products, they want to feel involved in the buying decision,” says Ms Ofori. “It’s not that men can’t do this, but women are very good at cultivating rapport.”

Another organisation determined to ensure women are attracted into the sector is Jardine Motors, one of the UK’s largest car dealerships. “A few years ago we interviewed 1,000 people from groups we wanted to hire and found just 2 per cent of women felt the car industry was where they wanted a career,” says Clare Martin, group human resources director. “We also found women got their view of sales from how they’d been sold to, which was predominantly by men.”

Measures it’s taking to appeal more to women include rolling out five-day working weeks by 2018 – the sector typically sells seven days a week. It has also boosted base salaries from £14,000 to £20,000 a year. It’s often said commission puts women off sales because it creates job insecurity and perpetuates a hard-selling culture associated with men.

The laddish, mates-club reputation sales has needs to be broken

But Ms Martin argues the biggest impact has been changing the language in job ads and showcasing females on its website. “In January we got 600 applications for our New Year intake; those making it to assessment were 80:20 male-female. Since making changes, our most recent assessment has seen a 50:50 male-female split,” she says.

Ms Martin echoes the popular sentiment that women must be hired on merit rather than meeting a gender quota, but Mr Montgomery argues there is benefit having senior saleswomen in position. “As a sector, we’re hampered by gender, so we’ve taken the view having female sales leaders has a larger impact than, say, having more women lower down because it could well be they’re more likely to hire more women, all things being equal,” he says.

Ms Ofori concludes: “We should even be more honest in calling sales ‘sales’. Hiding it behind titles like account manager or client director perpetuates the notion sales is somehow a dirty word. We should all, male or female, be proud to call where we work sales.”