For decades men have attended fewer primary care appointments than women, while female health has been taken as a given, with women perceived to pay closer attention to their own wellbeing and that of their families. Yet in 2017, statistics from Public Health England show the average man spends 20 per cent of his life in poor health compared with 25 per cent illness for the average woman. Why is this?

Although women access primary care services more frequently than men, mainly due to their reproductive needs, there’s an inherent bias in the healthcare system and it begins before women have even received a diagnosis.

Women do not take part in clinical trials at anywhere near the rate that men do. “There has been a systematic imbalance in research data generated during the last 30 years, which in turn affects the optimal use of therapies in women,” says Annalisa Jenkins, a medic turned bio-pharmaceutical executive who now focuses on finding biotech solutions to healthcare.

“We see this all over the world. Women balancing the care of family members and partners all too frequently gets in the way of them volunteering for a clinical trial; it’s just easier for men to volunteer.”

But it’s not as simple as women being too busy to contribute to research that’s the problem. It was only in 1993 that the US National Institutes of Health stipulated that women had to be included in research trials.

“There is this perception that men provide a cleaner ‘base’ because they don’t take birth control and don’t have to go through the experiences of pregnancy and childbirth. This has meant, accordingly, that fewer women are used to deliver data and so we end up with results and insights which reflect the needs of men alone.”

Lack of thought on how “male” diseases affect women

In many cases, a care solution worked out for men doesn’t translate for women. HIV medication, for example, was first developed for the treatment of gay men.

“When these medications were taken to Africa, where the predominant population affected was young women, there just wasn’t the data available to help the women,” says Dr Jenkins. “Essentially, we are developing medicines for only half the world.”

In the case of diseases that are considered “male”, but also affect women, women’s health can fall by the wayside, for example with heart disease.

“Traditionally people have perceived heart disease to be a disease of men,” says Dr Jenkins. “As a result of the implantation of prevention, and new medicines and lifestyle interventions, the rate of disease has now fallen in men. Conversely, in some parts of the world, women’s rate has increased.”

And then there’s the perception that women experience pain altogether differently. As psychologist Becky Spellman puts it: “More generally, women with chronic pain conditions are much more likely than men to be diagnosed as having a condition that is psychological or psychosomatic in origin.

“While some conditions certainly do have a psychological element, this assumption has often led to women being misdiagnosed or not receiving a diagnosis for many years. This can mean they are not being treated appropriately or even that a treatable condition can become a chronic one.”

Given that women in England and Wales are currently twice as likely to experience a chronic health condition, according to the British Medical Association, addressing the bias is clearly a pressing issue.

At the same time, women evidently have specific healthcare needs surrounding fertility, pregnancy and menopause which require different and unique solutions altogether. Again, bias can affect every element of female health. Currently, it takes an average of seven years for a woman to be diagnosed with endometriosis, a common condition that affects around 170 million women globally. Why? “Many of them are told that their pain is psychological or all in the mind,” says Dr Spellman.

Attitudes towards healthcare for women are changing

Thankfully, attitudes to female healthcare are transforming, led by a wave of female medics, technologists and campaigners who simply won’t allow female health to be taken less seriously. The US Food and Drug Administration has finally approved the first drug for endometriosis, while the femtech, or female technology, market is forecast to grow to £50 billion by 2025, according to research and consulting firm Frost & Sullivan.

With women’s increased legal, social and economic power comes a refusal to accept sub-par treatment. While legislators and investors are finally coming to the conclusion that such areas are no longer optional healthcare, the next step is to secure appropriate investment.

“Take menopause, something that every woman who lives to a certain age will experience during her lifetime,” says Dr Jenkins. “Yet if you look at the amount of capital flowing into this space and look at the companies, and drugs and pipeline, you’ll find it’s an empty pipeline. It simply hasn’t been seriously considered a commercial opportunity. And that’s what we are trying to change.”

While women make up some 70 per cent of the healthcare workforce, only 30 per cent are C-level executives and just 13 per cent chief executives. And while the most innovative solutions to female health problems, everything from IVF treatment to the redesign of the speculum, are coming from women-led operations, only 9 per cent of healthtech businesses are currently founded by females. 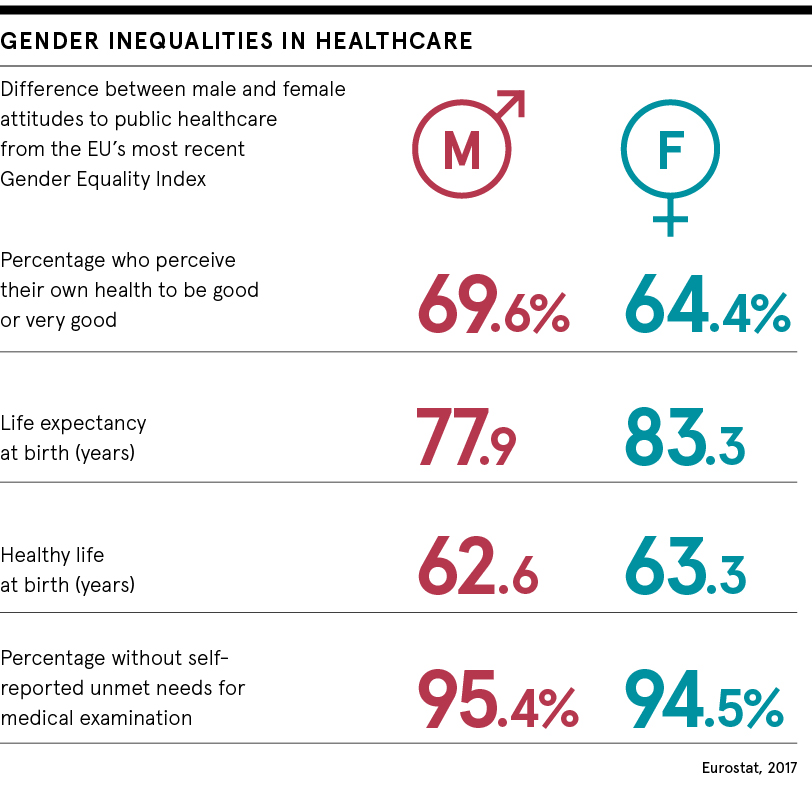 The rise of femtech tackling issues including fertility

Still, huge funding rounds for femtech businesses are becoming more common. Take Ava, the fertility bracelet startup which received $30 million to expand into contraception and other female health last year. Or Elvie, creators of the first silent breast pump, that received $42 million to develop tech-based solutions to female health needs at every stage of life.

Femtech can also give patients greater information about their bodies that they can use to navigate interactions with medical professionals more confidently, which helps to offset the historical bias issue. With the NHS currently cutting fertility services budgets, IVF app Salve, for example, focuses on providing users with information about the process so they can ask the right questions of clinical providers and take a more dynamic role in their treatment.

But while consumer technology may be closing the gap between wealthier women and men, it isn’t touching the needs of the poorest women, whose health issues, including everything from abortion to mental health care and domestic abuse to Alzheimer’s, are disproportionately affected by their socio-economic status, far more than with men, according to the British Medical Association.

What’s been proven to work is a focus on the unique biological and sociological factors that shape women’s health needs. Take the recent move in Scotland and Wales to end “period poverty” by making sanitary products freely available to girls and women in education and on low incomes. Or the cervical cancer screening programme in England and Wales, which has reduced deaths by 70 per cent since it began in 1988, although screening numbers are now starting to fall again.

Public health can transform female health says Dr Jenkins, but only when it is prioritised. “Take cervical cancer; we now have a very effective vaccine which could wipe it out in a generation,” she says. “But because public health has not yet articulated that we care enough about women’s healthcare, we are vacillating. Comparably, if we had found a cure for testicular cancer, would we not have solved it by now?”

When it comes to direct action on the issues nobody seems to be taking seriously, it’s dedicated lobbyists who make all the difference. Female genital mutilation (FGM) is an issue which currently affects some 200 million globally, with 1,005 new cases registered in England and Wales between April and June 2018 alone.

It’s thanks to campaigners, such as Nimco Ali, Somali social activist, co-founder and director of the Daughters of Eve non-profit organisation, who have dedicated years to lobbying MPs that the UK has finally made its first prosecution for FGM, tightened laws to help children at risk of the procedure, and allocated national funding to help health services and schools identify and support victims.

For Ms Ali, the issue is believing women when they tell us they have a problem. “Language is key. We need to listen to women and accept they know their body,” she says.