India’s beauty market is flourishing on a scale not seen before. Growing at a rate of 15 to 20 per cent a year, according to KPMG, it is expanding twice as fast as sales in the United States and Europe.

The $6.5-billion market is set to top $35 billion by 2035, research by the Associated Chambers of Commerce and Industry in India (Assocham) and MRSS India shows.

For such a populous country that also possesses an historic and sophisticated beauty culture – it is the birthplace of Ayurveda, henna, kohl and threading, to name but a few – the change is long overdue. 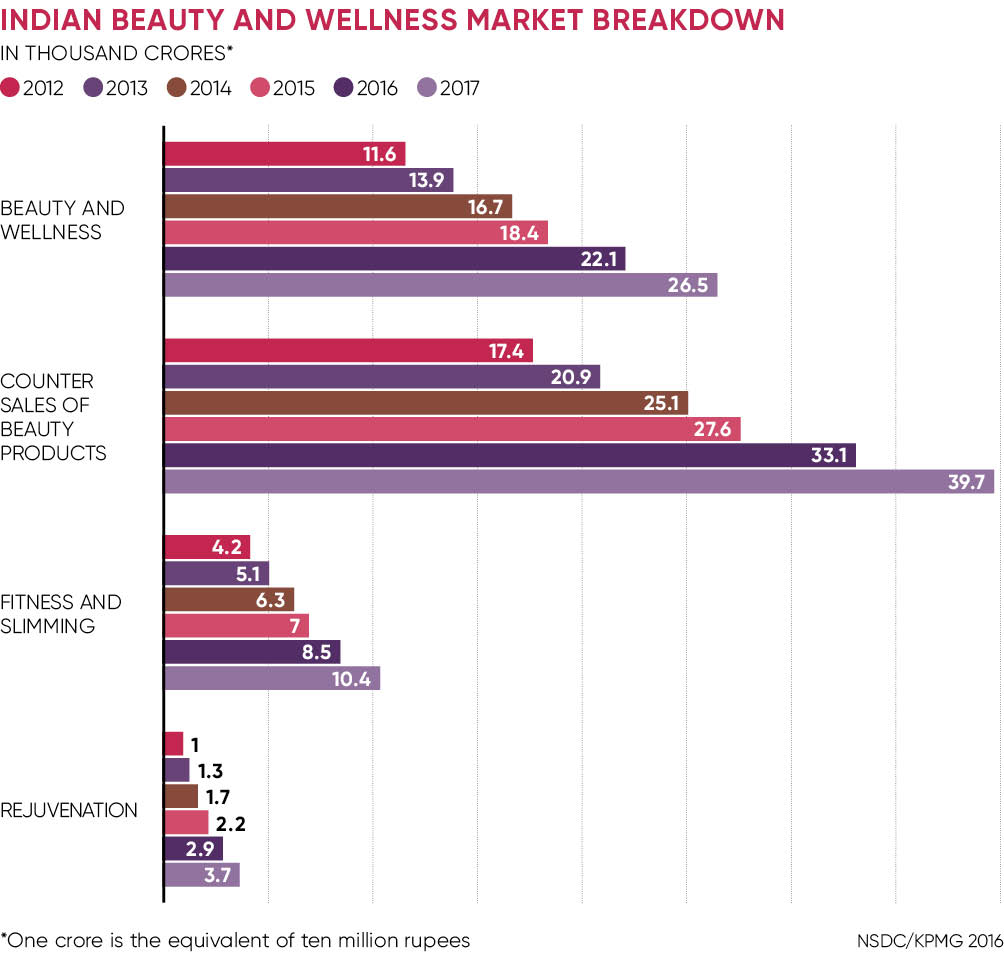 “The evolution of a lower-middle class with higher disposable income and a younger demographic, aged between 16 and 20, who are heavily influenced by digital media, are accelerating this growth,” says Jean Christophe, managing director of L’Oréal India. “The market potential is huge, as premium contributes only 10 per cent to the overall market, while it is 60 per cent globally.”

Premium beauty, an area that was historically underserved in India, is seeing the greatest boost, outstripping growth in the mass market at 6 per cent compared with 1 per cent in 2017, according to the Indian Beauty and Hygiene Association. Young urban dwellers, who are behind the growth in sales, are buying their imported products online, with 62 per cent reporting they prefer e-commerce to physical stores.

Premium beauty, an area that was historically underserved in India, is seeing the greatest boost, outstripping growth in the mass market

The successful online beauty boutique Nykaa, which takes Sephora as its inspiration, is responsible for seeding the growing nascent market. Nykaa imports leading and niche prestige and mass brands, such as L’Oréal, Olay and Kiehl’s, and provides a springboard for emerging Indian beauty brands.

Founded in 2012, the company delivers to more than 900 cities and has plans to open a store in every major city by 2020. Catering for both men and women, the site features tutorials and how-tos on everything from royal wedding make-up to sustainable beauty master classes.

Where India truly trail blazes is in the men’s market, which has grown 42 per cent in the last five years, far faster than the personal-care market as a whole, reports Assocham. Haircare, beard-grooming, scents, spa treatments and even make-up are of interest to the middle-class Indian super-groomer. Hair and beardcare are taken especially seriously, with premium Indian brands, such as Beardo, Ustraa, Bombay Shaving Company, The Man Company and Lets Shave, carrying a selection of innovative products including moustache growth roll-on and beard balm.

Reflecting a larger trend towards the indigenous and natural, the most intense competition in Indian beauty is felt among natural and herbal brands. In 2016, the sector experienced 12 per cent growth, according to Euromonitor. The same research also found that more than half of Indian consumers consider natural or organic features influence their hair and skincare purchases.

India’s beauty exports, which already exceed imports, are expected to see a large part of their future growth in the natural segment, according to Chemexcil. Brands such as Biotique, Himalaya Herbals, Blossom Kochhar, VLCC, Dabur, Lotus, Jovees, Kama Ayurveda, Patanjali and Just Herbs are just some of the herbal ranges reaching European, American and Asian markets.

A name we should expect to hear more of outside India is Forest Essentials. The Ayurvedic concept line markets itself as “the quintessential Indian beauty brand” and has backers that include Estée Lauder. On a much smaller scale, the independent Mumbai-based vegan brand Saattvikaa is entirely natural and homemade, and formulates products using ingredients such as cold-pressed oils, organic herbs, natural clays, organic essential oils and hydrosol (distilled floral water). 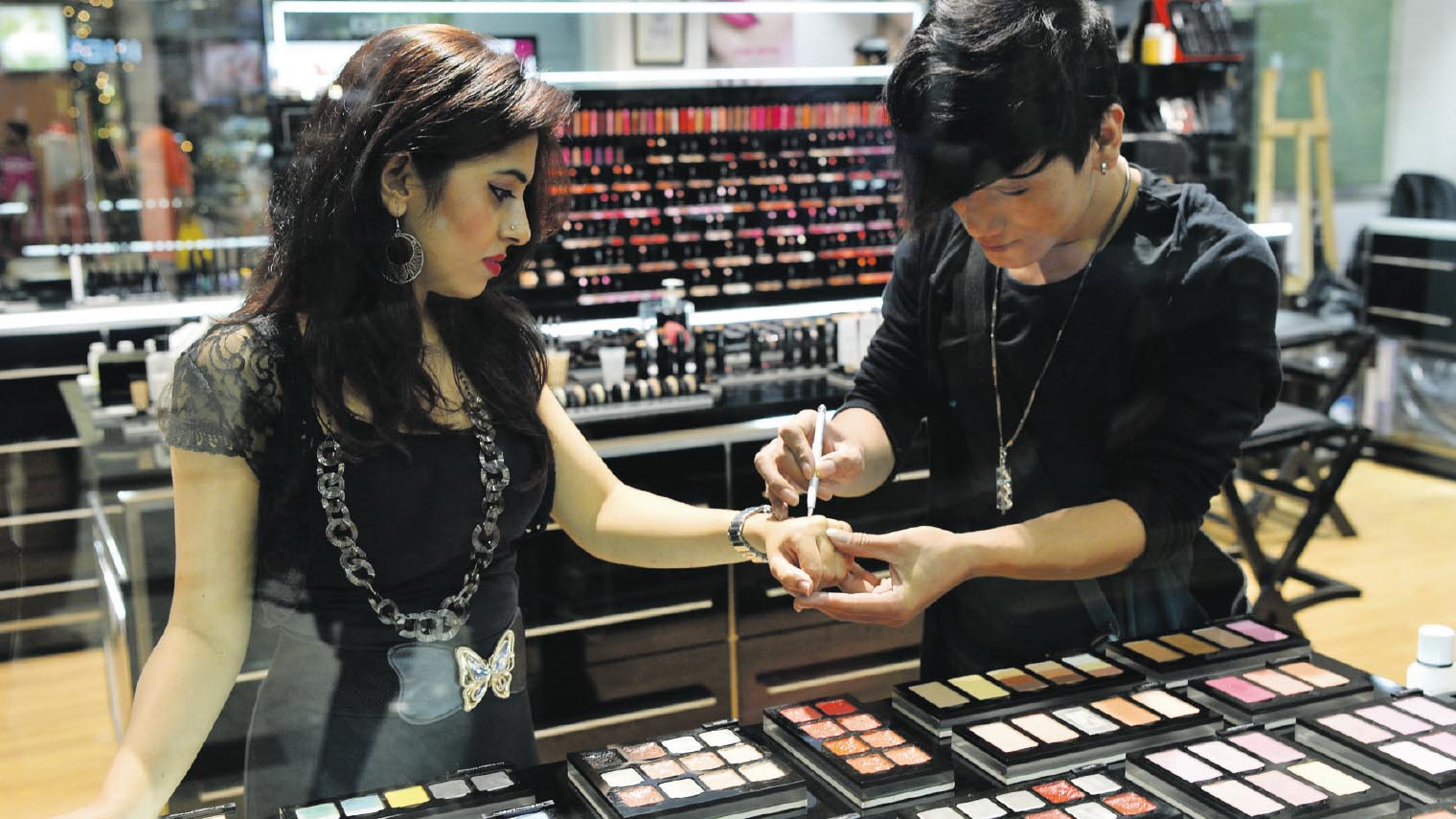 Founded in 2016 by Charu Shah, a former architect who grows many of the ingredients herself, the brand has more than 30 products, including soaps, toothpaste, hair and body oils, talcum powder, and shampoos and conditioners.

The Indian beauty market faces challenges, however. Despite surviving the initial impact of prime minister Narendra Modi’s demonetisation policies, the sector is yet to feel the full effect of the Goods and Services Tax (GST).

The GST, which came into force in July, is the most far-reaching tax reform to have been undertaken in India for 70 years. Possessing a rubric that at times may seem curious and arbitrary, it essentially privileges home-grown products and Indian traditions. Shower gel, for instance, which is typically produced and sold by multinational companies in India, has been declared a premium product and hit with a tax hike. Sales are expected to fall and swing back in favour of plain bar soap, which is deemed an essential under GST.

Colour cosmetics have been hit with a 24 to 28 per cent tax increase, making the cheapest of eye shadows and lipsticks less appealing to the lower-middle classes. Analysis by Euromonitor suggests that the lower end of the market may fall off to the benefit of mass sectors, as well as international players such as Unilever’s Lakmé brand.

GST also favours hair oils, classified as a necessity and which have received an 18 per cent tax decrease, while a 4 to 28 per cent tax rise has been whacked on shampoos and conditioners. Euromonitor forecasts that the move will drive consumption of hair oils up by 2.3 million litres in 2018, giving international players a good reason to begin innovating in this area where for the most part local brands dominate.