Bottles of fine wine have long been used to pass on wealth. The personal assets of Friedrich Engels, who wrote The Communist Manifesto with Karl Marx, included 924 bottles of claret, 588 bottles of port and, of course, 156 bottles of champagne, which makes sense for the original champagne socialist.

That wine investors come exclusively from the ranks of the wealthy is not a wholly unfounded perception. Well-heeled families have almost 10 per cent of their wealth in collectibles such as art, fine wine, stamps, diamonds and cars, according to a Barclays survey. But there are advantages for investors at a range of levels. What makes collectibles valuable is their quality and rarity. Some argue they’re uncorrelated to other markets and, as such, a good way to diversify a portfolio.

Fine wine has returned an inflation-adjusted 3.7 per cent a year, based on data stretching back to 1900, according to a report by Credit Suisse and research by Christophe Spaenjers, associate professor of finance at HEC Paris. So, what’s the best way to invest in wine?

The difference between collecting and investing

“The key question really is what the potential investor is trying to achieve,” says Philip Staveley, head of research at Amphora Portfolio Management. There is a difference between choosing to invest in wine and assembling “a collection of wines to represent something like a series of important years – anniversaries, children’s birth years and so on – or to build a drinking cellar”, he says. In contrast, an investor is “someone whose primary goal is to make money out of the temporary ownership of wines”.

How long do wine investors typically own it? About five years, according to Matthew O’Connell, head of investment at BI Fine Wine & Spirits. “Wine prices don’t move linearly; they’re driven by a supply-demand imbalance,” he says. Fine wines, which can have lives of about 40 to 50 years, become more desirable as they age and as the pool of vintages shrinks, as they are opened and drunk.

Unlike equities, which have seen a rise of DIY wine investors, fine wine is an alternative investment that tends to appeal to higher-net-worth individuals. The majority of wine investors work with a wine broker as it’s a specialist market. It’s worth bearing in mind that wine brokers typically charge about 10 per cent commission when investors sell. It’s therefore important to account for the difference, before a profit is made.

What makes a wine valuable?

What determines the value of a wine? There are a number of factors to take into consideration, including the region, popularity of the producer, scores given by wine critics, scarcity and age, according to Justin Gibbs, director and co-founder of Liv-ex, a global marketplace for the wine trade.

“There are also reasons why two bottles of the same wine might hold different values,” he says. “Is the bottle in perfect condition and is it in its original wooden case? Value can also be affected by tax status. Have local taxes been paid or is the wine stored in bond?” Wines that are sold in bond have not had the duty and VAT paid on them. This is often the case with wine investments, including wine that is purchased en primeur before it has been bottled.

How does an expert go about choosing wines for a portfolio? “You have to first work out the asset pool from which you’re choosing,” says Mr O’Connell. There are wines which are considered investment grade. Even though there is no equivalent of Moody’s ratings agency, they are the definitive wines of the region and are expected to perform well, such as Château Lafite Rothschild, for example. The classic wine regions are Bordeaux, Burgundy, Champagne, Rhône and Tuscany. Californian wines are increasingly joining the pool of top wines.

“People ask me what’s the next big thing in wine investing? Nothing really, because there’s a defined pool of wines that are at the top; they’re of extremely high quality and rarity, and they have a track record of investment performance,” says Mr O’Connell.

It’s important to consider who the wine drinkers are, because they help to drive the market, he explains. “This is a big generalisation, but there is a perception that the European and UK palates tend to like older wines, while people in America and Asia drink slightly younger wines,” says Mr O’Connell. This difference can have beneficial effects on the supply-and-demand balance for wine investors.

Diversification is key for wine investors

As with all investments, diversification is key. “When it comes to a portfolio of equities, the spreading of individual stocks across many sectors mitigates risk and the same goes for wine,” says Patrick Thornton-Smith, commercial director at Cult Wines.

And what kind of budget should the wine investor have? “We see £10,000 as a suitable minimum budget to achieve a diversified portfolio, although this can be built up over time if required,” says Mr O’Connell. For portfolios more than £100,000, there will be some time requirement for selling, although he says this can be mitigated by using BI Wine’s LiveTrade online platform, for example. 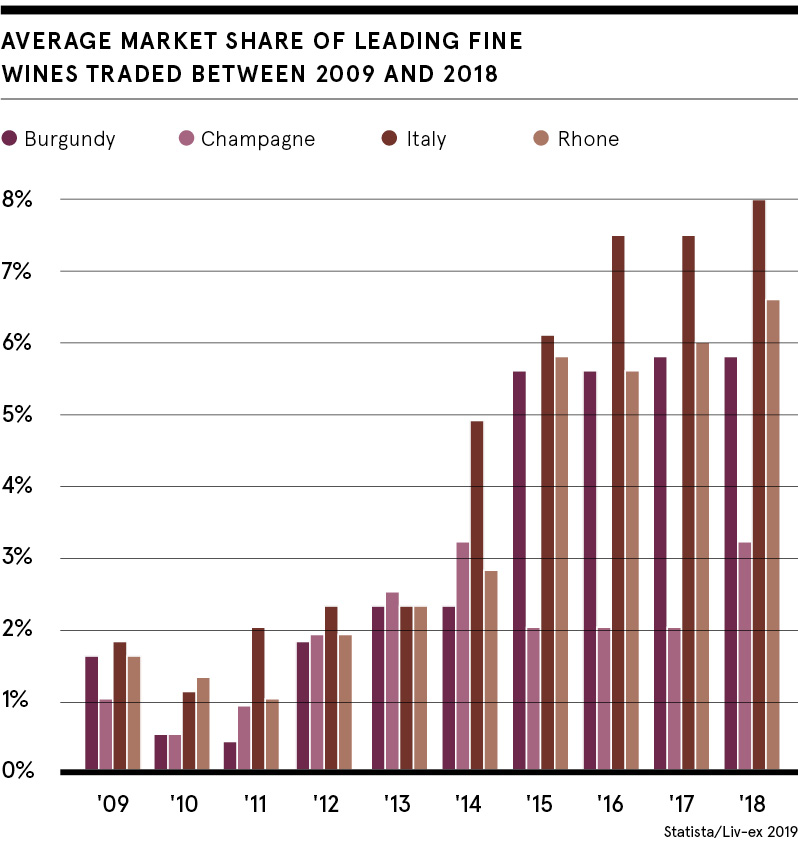 Meanwhile, Mr Staveley suggests a minimum of £20,000 if you want a balanced, risk-assessed portfolio because then you can diversify. “For example, for £100,000 you could have a variety of wines from several vintages and regions of the world or you could have six bottles of Romanée Conti. One is patently a higher risk approach than the other,” he says.

So, it’s paramount to invest in a range of wines, by considering all the factors that determine their value. “At Amphora we have an algorithm which assesses all the relevant fixed and semi-fixed data, and once wine prices are put through the algorithm, a clear picture of relative value emerges,” says Mr Staveley.

When it comes to choosing a wine for everyday consumption, much is made of wine labels that promise “hints of wood smoke” or “crisp white peach”. Do labels matter when it comes to wine investing? Not really. But Mr O’Connell says there can be occasional exceptions. The price of the Château Margaux 2015 was influenced by the fact it has a special bottle and label to commemorate the death of its long-term winemaker.