The biggest mergers and acquisitions in insurance

This year has been transformational for the UK insurance industry, with mergers and acquisitions dominating headlines across life and non-life sectors.

Deals have been driven by cheap financing, the growing importance of scale, the need to futureproof against technological advances, regulatory pressures and a desire for larger businesses to have global reach.

Within the sub-sectors of the industry, the picture is far more nuanced, but market analysts are expecting this thirst for deals to persist way into 2019. 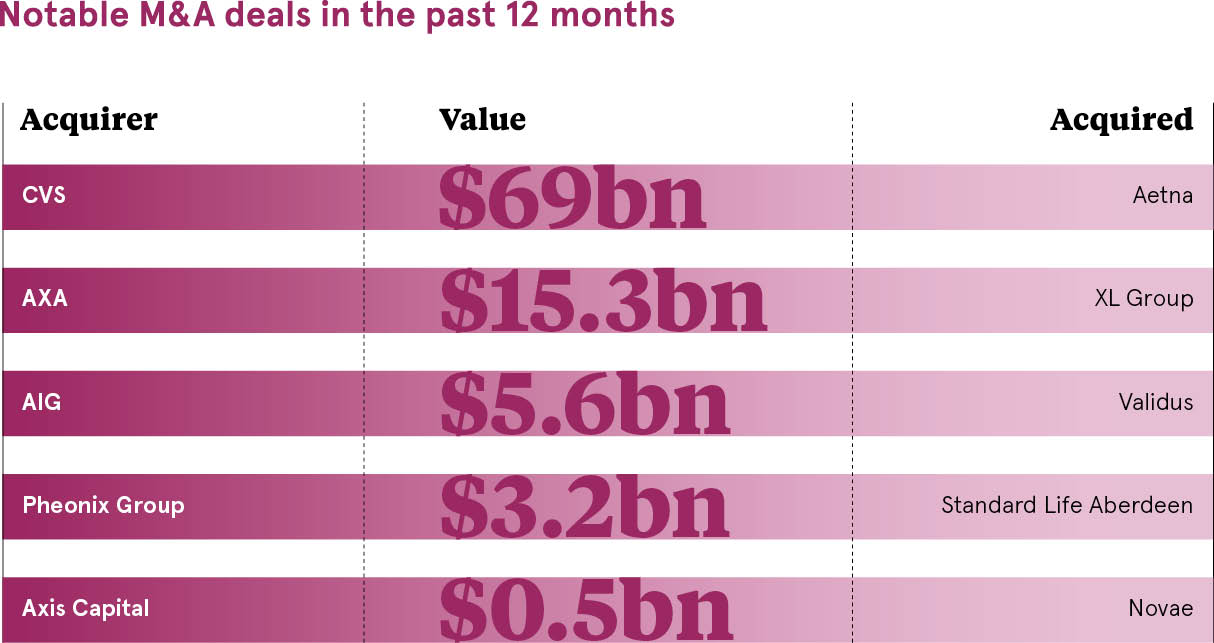 “Coming into this calendar year, we have gone off the scale in terms of global deals,” says David Lambert, global insurance transactions leader at professional services group EY. “We don’t think these are one-off deals. This has set off talk in boardrooms. The sector is transforming.”

The life market has seen notable activity following the implementation of the Solvency II regulations, which pushed many businesses to rethink the areas in which they operate. Under Solvency II, annuities and products promising guaranteed returns became less palatable for insurers as the new rules required that they held significant funds to match liability risks.

Many opted to refine their business models, offloading legacy books and reinvesting the proceeds in revised corporate structures and new areas.

In February, the newly merged Standard Life Aberdeen offloaded its entire life assurance business to Phoenix Group for £3.24 billion. The company received £2.3 billion in cash and a 19.9 per cent stake in Phoenix from the transaction. Standard Life Aberdeen said the decision to refocus the business as an asset manager meant it could operate with “significantly lower capital requirements”.

“Solvency II has caused some of the established players to refocus what they want to do,” says David Petrie, head of corporate finance at the Institute of Chartered Accountants in England and Wales. “Established players have been selling off large chunks of their portfolio to reduce a certain amount of risk and free up capital to allow investment in new opportunities.”

In the non-life arena, international insurers have been looking to secure a presence in the Lloyds of London market because global insurance pricing has been under pressure and volume growth has been sluggish.

The Lloyds market is a global centre for specialist risks in areas such as aviation, marine and terrorism, among others. Global insurers have recognised the importance of having a presence here.

“You’ve had very large insurers sitting on a lot of capital and struggling to grow themselves organically,” explains David Marock, group chief executive at Charles Taylor. “They are now saying ‘I need to do a large deal where I can drive out cost efficiencies, utilise my capital and enter related areas which I think have greater longevity of prospects’.”

Last October, Axis Capital confirmed its acquisition of Lloyds-quoted insurer Novae, then in January AIG announced it was acquiring Validus, owner of a Lloyds syndicate, in a $5.56-billion cash transaction. This was followed in March by French insurance giant Axa announcing it was to snap up the XL Group for $15.3 billion.

Mr Martin explains that two longer-term themes in the non-life sector of recent years have been the consolidation of the reinsurance sector, citing Platinum Underwriters, Montpelier Re, Endurance and PartnerRe as examples.

He concludes: “I expect to see a continuation of the recent deal activity with companies with strong analytical foundations and access to a broad range of capital providers being especially in demand. Some of the insuretech startups of recent years could also be acquisition targets, especially those that access new markets or move insurance away from a pure post-loss reimbursement product to one of more value-added risk prevention.”