Drama is turning into a crisis for traditional TV stations. Internet streaming services Netflix and Amazon Prime are pouring billions of dollars into creating original, high-quality drama and programming, far outstripping the budgets of established broadcasters.

Described as the most expensive television series ever made, The Crown points the way for the future of television. The lavish royal drama cost Netflix a reported $10 million an episode to make. With Amazon spending $250 million on producing Jeremy Clarkson’s vehicle Grand Tour, the cost of producing TV shows is spiraling upwards.

Netflix says it expects to spend $6 billion on original content in 2017. Amazon spent $2.6 billion in 2015 and is expected to boost that sum. These internet streaming operators are known as Over the Top (OTT) services as they are transmitted via the internet, bypassing traditional distributors such as broadcasters and cable operators. Now you can watch top-quality drama on your mobile, laptop, tablet or connected TV.

So will traditional TV stations be reduced to the poor cousins of the high-spending OTT services?

Creating shows for global online consumption in 200 countries means budgets can be much greater than for locally produced programming.

Netflix chief executive Reed Hastings has long predicted that streaming will become the norm for TV viewing, and cable and traditional channels will evolve or die. He has predicted that in the next ten to twenty years, all television will be watched on the internet.

Figures for the last five years suggest Mr Hastings has a point. Daily viewing in the UK on a TV set has declined in every age group since 2012, with the steepest falls among younger groups. Among 4 to 15 year olds, daily TV viewing has fallen nearly 30 points since 2012 on an index produced by researchers Enders Analysis using data from TV viewing measurement body Barb. The 16 to 34-year-old group is also watching far less, with the index of daily TV viewing plummeting from 100 to 77.

Claire Enders, chief executive of Enders Analysis, says: “The peak of UK viewing was during the 2012 Olympics across every demographic. We are looking at five years of decline since that peak.” 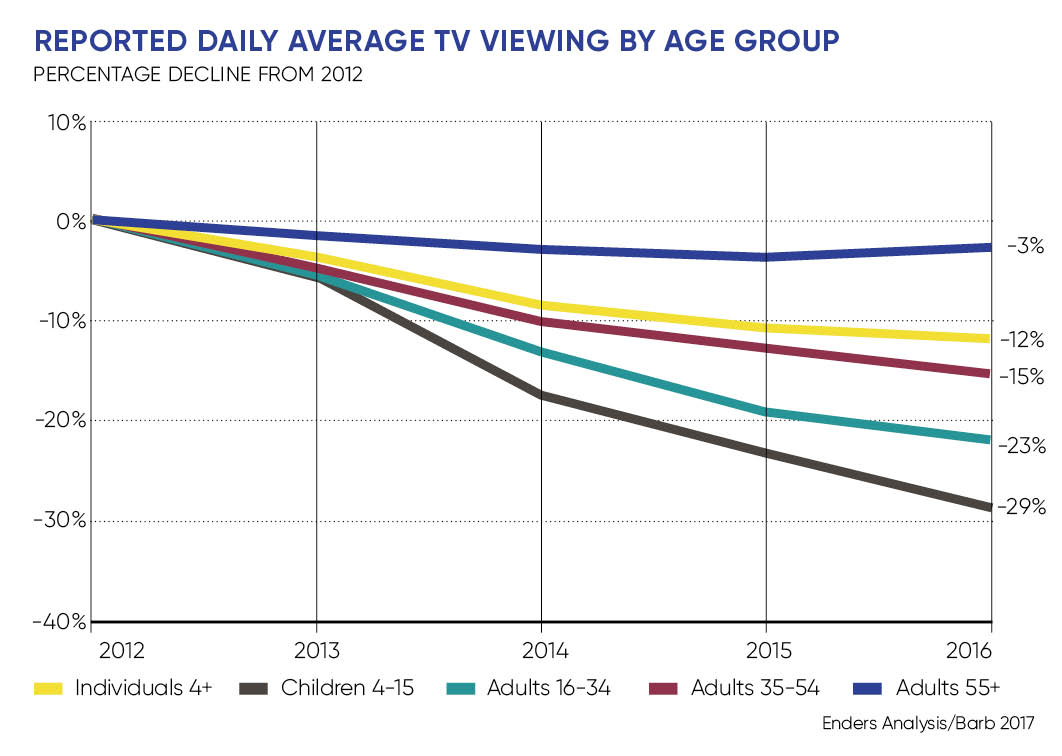 A new role for traditional TV

However, Ms Enders plays down the idea that established TV stations will be killed off by internet viewing. “Over the last 35 years, everything that comes along finds it place. Very few things ever disappear, they become more efficient,” she says.

UK-specific TV still attracts huge audiences, as seen from the popularity of shows such as The Great British Bake Off, The X Factor, live sport and even the news.

David Bouchier, Virgin Media’s chief digital entertainment officer, says: “Destination channels will always have a role. It is very difficult for individuals to determine exactly what they want to watch, they need that passive enjoyment that comes from being presented with programming.”

Mr Bouchier compares assertions that OTT services will replace traditional broadcasters to the arrival of digital channels such as MTV in the 1980s.

“People said that will be the death of the networks, but over time what it actually proved was there is co-existence, there is space for both services. Those networks become even more important, because they become the destination point for big-ticket, big-event, heart-of-the-nation programming. That will never be substituted by on-demand TV,” he says.

But OTT services are on the rise. Netflix has grown to 86 million subscribers worldwide while Amazon Prime has 63 million customers globally. There are a variety of other streaming services, such as Hulu in the United States and internet set-top box Roku. The BBC and ITV have teamed up to launch BritBox, offering British programming in the US, with plans to launch internationally including in the UK.

Meanwhile, an online service that has launched in the UK is TVPlayer, created by A&E Networks, a joint venture between media giants Disney and Hearst. This offers access to free UK channels and for a small monthly subscription allows access to a variety of pay channels. It has one million users in the UK.

Chief operating officer Rob Hodgkinson says: “We are moving into the fourth generation of TV. First was black and white, then came colour, and now we are at the end of the satellite era and are moving into internet TV. OTT is the way content is going to be delivered in the future.”

However, Mr Hodgkinson believes predictions of the imminent death of traditional TV stations are exaggerated. He quotes figures from Enders Analysis showing that 80 per cent of UK viewing will still be of broadcasters’ content by 2025, though with an ageing profile of viewers.

He believes the big challenge for TV watched online is discovering content. “The long-term goal is to create a search bar with universal search across all different platforms and a data-driven content recommendation platform,” says Mr Hodgkinson. “You can’t do that at the moment because you have to jump from one to another.”

It seems clear that traditional broadcasters will continue to exert a magnetic attraction on viewers keen to see locally produced live TV, whether that is sport, talent shows or soap operas. But the biggest, most lavish and dramatic shows will be made for the internet.