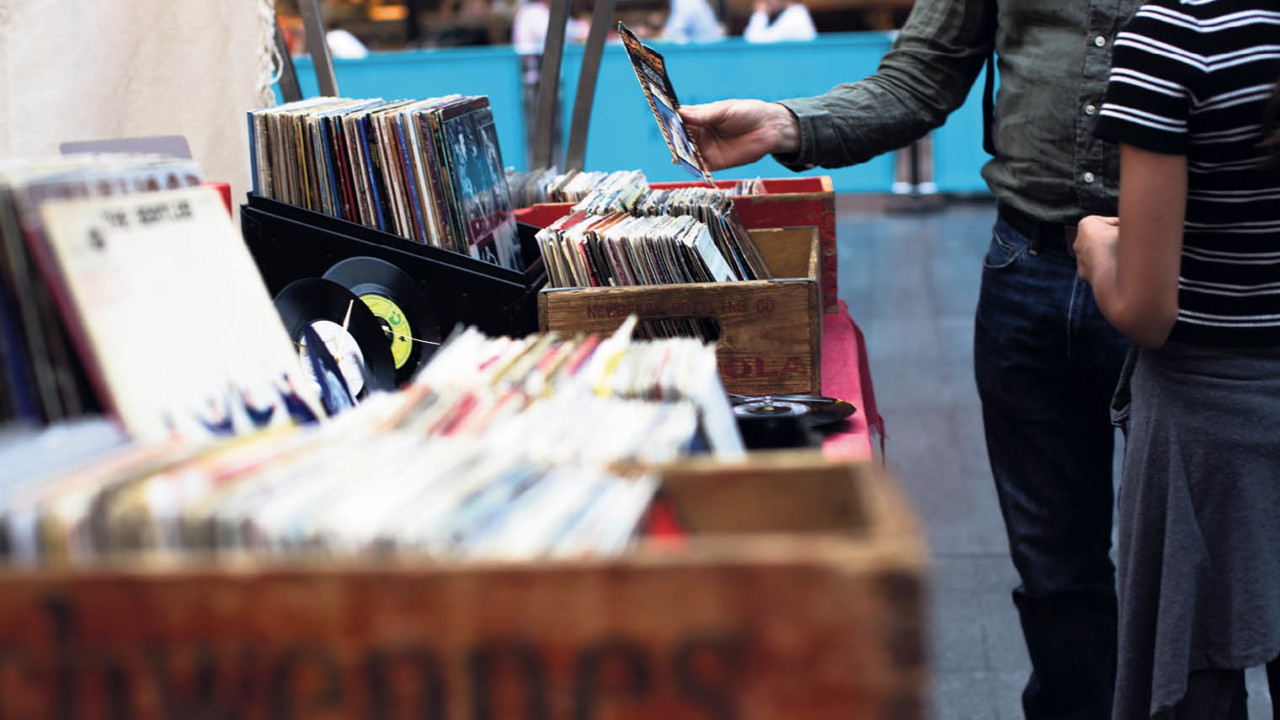 Vinyl has undergone a resurgence that few in the music industry were fully prepared for, with year-on-year sales growing by 53 per cent in 2016, to total more than 3.2 million, according to the BPI. This revival contrasts starkly with sales of CDs and downloads, which are plummeting. Dan Ison, lead UK partner for media and entertainment at Deloitte, sees vinyl’s comeback as something of a phenomenon.

“The ubiquity of music streaming services means that music has never been more accessible, portable and readily available for listeners. Yet, despite that, fans are choosing to buy something tangible and, importantly, nostalgic, at a price point that provides record companies with significant revenues,” says Mr Ison.

Such rapid changes in consumer behaviour can find companies on the back foot and scrambling to adapt to the new commercial environment. And the increased interest in physical items related to media experiences isn’t isolated to just the music industry and can be found throughout the entertainment space. For example, consumers eager to get a physical piece of their favourite TV show or film helped push the global TV and movie merchandise market up 4.2 per cent to reach $251.7 billion in 2015.

Reasons behind the rise

As more and more previously tangible listening experiences become digitised and stored in the cloud, music buyers lose the cultural identifier that owning an album used to give, according to Mark Mulligan, managing director of MIDiA Research, a media and technology analysis company.

“Seeing an album on someone’s shelf said something about that person. A playlist just doesn’t do that. A large proportion of people who buy vinyl don’t even own a turntable. It isn’t about the music format, it’s a way of saying something about themselves and their tastes,” says Mr Mulligan.

According to a BBC/ICM poll from last year, 41 per cent of people who buy vinyl have a turntable but do not use it, with 7 per cent of vinyl buyers not even owning a turntable. Streaming and vinyl clearly offer different listening experiences, allowing these products to co-exist.

In fact, the same poll backs up the idea that the widespread availability of streaming services is driving up vinyl sales, with half of respondents saying they listened to an album online before purchasing it on vinyl.

As more and more previously tangible listening experiences become digitised and stored in the cloud, music buyers lose the cultural identifier that owning an album used to give

“Some people will listen to an album on a streaming service and then buy it on vinyl to celebrate what the album means to them. A number of lifestyle stores, like Urban Outfitters, are even stocking vinyl from artists like The 1975,” says Alastair Smith, head of commercial at Island Records.

While vinyl sales are still expected to increase and music enthusiasts continue to enjoy this format, it is not likely to be a major growth engine for the industry, with vinyl only accounting for less than 3 per cent of total music market sales.

“Music’s future, from a consumption perspective, is all about digital. From a revenue and profitability perspective, it is about optimising the live experience opportunity, and this is why we have seen so many labels and artists focus on live entertainment, such as concerts and tours,” adds Mr Ison.

Outside music there have been countless examples of analogue products which have seen a second life in the digital age. From the newly launched Polaroid Pop instant digital camera to Kodak’s Super 8 camera, the first in production since 1982, some companies are capitalising on this trend.

In most media sectors physical revenues still dominate digital sales. Deloitte’s Media Metrics research found that physical sales account for more than 80 per cent of revenues for film, books and magazines. “In some sectors the decline of physical sales is showing some signs of reaching a plateau or even reversing,” adds Mr Ison.

However, the growth of certain retro products may not be emblematic of a widespread digital backlash. “I think it is less about an anti-digital backlash and more about adding to digital, rounding out the experience. Streaming is not about to disappear, but there will be a growing market, among super fans, for tangible real-world products to compensate for what it lacks,” says Mr Mulligan.

Media and entertainment companies hoping to meet consumers’ changing appetite for digital content should embrace the many different methods of media consumption, ensuring that all revenue streams are harmonised.

“It would be risky for any business in the media sector to approach digital in a ‘black or white’ manner. Rather, businesses should take an omnichannel approach – digital products and services will co-exist with the physical and traditional, whether that’s books, music, film or TV. The different channels need to work together to remain attractive to consumers,” Mr Ison concludes.