Pace of change in the media environment can be disorientating. Just when the landscape seems to be stabilising, another new player, new technology or new consumer habit comes along and shifts the contours once again.

Much of the disruption is being driven by one overwhelming force: the fight to control content. Owning content means access to audiences and everyone wants in on the action. Traditional media and entertainment operators are contending with telco companies, social media platforms and tech giants such as Amazon and Google attempting to muscle in and gain ground.

With the battle reshaping every aspect of the industry and many of the leading players no longer satisfied performing their traditional roles, what strange new structures and partnerships might we see in the years ahead? What will the successful media company of the future look like? 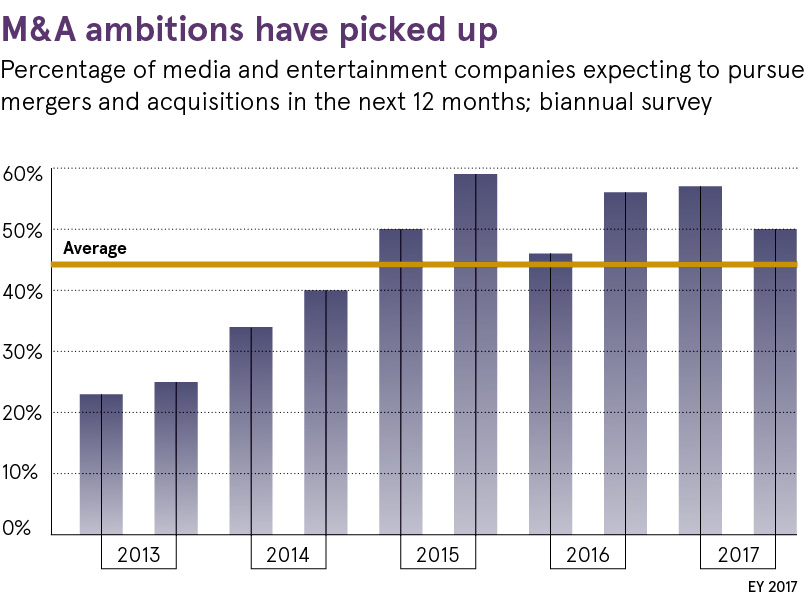 One of the most powerful current trends is the convergence of entities from formerly separate spheres: the distributors and the creators of content. If the planned merger of AT&T and Time Warner is sanctioned by a US judge it would give the mobile network, which already has a stake in pay TV through its subsidiary DirecTV, a grip on a stable of news and entertainment brands that includes CNN, HBO, Warner Bros and DC Comics.

“The telco operators have been watching the dramatic rise in video data moving across their networks and they desperately want a meaningful stake in it,” explains Ed Barton, chief analyst at consultancy firm Ovum. “In many countries there is a recognition that regulatory constraints have to be somewhat loosened to enable traditional distributors to compete effectively against new digital platforms.”

Pay TV operators are particularly worried about the threat posed by the so-called over the top (OTT) internet providers such as Netflix and the noisy entry into programming made by Facebook, Apple, Google and Amazon. The Silicon Valley behemoths are spending huge sums to offer their users exclusive shows. Last August, The Wall Street Journal revealed that Facebook is committing $1 billion (£733 million) to screen original content over the year ahead.

Competition from these global direct-to-consumer platforms helps explains why US cable giant Comcast recently launched a £22-billion bid for Sky, believing the European broadcaster’s content will expand its scope internationally.

Telco company dominance is far from inevitable, however. Disney remains keen to purchase 21st Century Fox’s key assets, including Rupert Murdoch’s 39 per cent stake in Sky, and is thought to be particularly eager to get its hands on Sky’s streaming and on-demand services. Disney’s ambition demonstrates what is possible for some of the largest legacy media companies, which is the ability to capture popular distribution platforms.

The emerging media ecosystem does not have to be one in which the big fish eat the smaller ones. Local broadcasters are well aware of the head start the tech giants have when it comes to data gathering and targeting different audiences with tailored ads. It’s why traditional broadcasting rivals are now collaborating on targeted advertising solutions both for traditional TV and video on demand, or VoD, platforms.

Collaboration between rivals may hold the key for traditional publishers too. Newspapers and magazines are still struggling to monetise their content because of the aggregation of their stories and absorption of so much digital advertising spend by Facebook and Google.

Just as broadcasters and OTT providers are joining forces to offer subscription bundles – Sky and Netflix recently struck a deal to include Netflix in a Sky package – publishers have an opportunity to begin bundling content too. Offering readers access to multiple websites through a single monthly fee would be one way of winning over cash-conscious readers.

It’s going to be increasingly important to have your own content and make sure it’s really good content, which guarantees audiences on any platform

Fleet-footed companies have to be imaginative when it comes to forging alliances. Once unlikely partnerships have given local players much wider international reach. BBC Studios has formed co-production arrangements with Netflix and AMC. NBCUniversal and ESPN have agreed to make live video available on Twitter. VICE, having started life as a print magazine in Canada, is now producing video content for local broadcasters around the world.

These synergies show the media company of the future has to be willing to experiment and think strategically about every aspect of the industry. Successful companies will also have to keep the changing demands of the audience in mind. Consumers have shown they want choice and agility is required to give them the content they want whenever they want it on a wide range of devices.

Part of the challenge is making sure content, formats and advertising are suitably personalised for the individual, while making sure the whole experience is delivered with a look, feel and tone that fits consistently with the company brand.

Audiences develop relationships of trust and affection with their most cherished media and entertainment companies. It’s a much more delicate and intimate process than the tech giants have realised, as the Facebook-Cambridge Analytica data scandal has so clearly demonstrated.

“Technology-oriented companies tend to think of audiences as users and they are not the same,” says Mr Barton. “It’s important to understand what they’re comfortable with in terms of respect for their data and their privacy online. You mess around with that at your peril.”

As for the creative types, it’s a good time to be pitching. There are more outlets and huge demand for new material. “It’s going to be increasingly important to have your own content and make sure it’s really good content,” concludes Jesse Whittock, insight editor at Broadcast magazine. “Good content guarantees audiences on any platform.”