It may be telling that one of the smash hit books of the past year has been on sleep. Berkeley professor of neuroscience Matthew Walker’s Why We Sleep was a comprehensive analysis of why humans need to sleep, which doubled up as a polemic against the habits that lead to insomnia.

He marvels: “A hundred years ago, less than 2 per cent of the population in the United States slept six hours or less a night. Now, almost 30 per cent of American adults do.” The health implications are shocking. Lack of sleep leads to mental illness, diabetes and chaos. More than 1.2 million accidents are caused each year by sleeplessness.

A key reason for sleepless nights is pressure at work. Change has never been faster. Companies are simply struggling to adapt to the multitude of threats to their existence. The pressure to transform is immense. 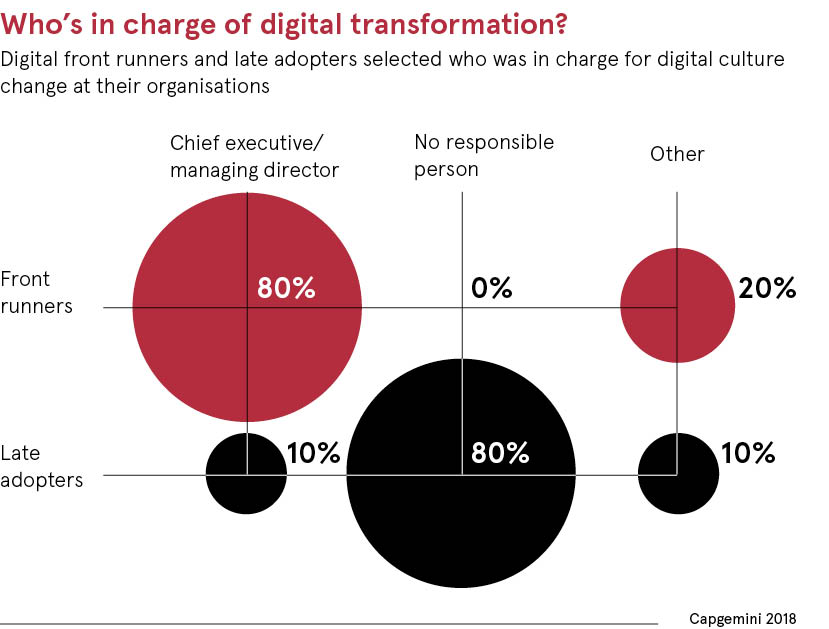 A survey by Couchbase, a customer engagement database provider, of 450 digital transformation project leaders revealed 54 per cent worry their business would go bust if their digital transformation failed. Fashion brand Jaeger went to the wall for precisely that reason. A further 89 per cent of enterprises say their industry is being disrupted by digital technology. Worse, 90 per cent of digital projects fail to meet expectations.

Could there be a solution? For a rising number of firms the severity of the situation calls for a new role: the chief transformation officer.

Delivery company UPS created the role in November. The new chief transformation officer reports directly to the chairman and chief executive. The position is “charged with driving and facilitating organisational change that will help UPS to both identify and execute opportunities for profitable growth within its existing business units and in yet-untapped markets and product segments”.

Advertising giant WPP’s first chief transformation officer is settling into the job. Lindsay Pattison’s remit is to unite efforts across the 160 or so agencies under the WPP umbrella. It’s a job so big she could be forgiven for a sleepless night or two herself.

But is the role necessary? The consulting world is divided. Ben Pring, director of Cognizant’s Center for the Future of Work, says: “It is magical thinking that one person could do everything required to make a large company fit for purpose in the 21st-century digital economy. It is just not possible.

“Digital transformation requires a fundamental shift from previous models and impacts the customer experience, a company’s operations and back office, the way it markets and sells, how its employees work, and the products and services it delivers.

Nick Taylor, managing director at Accenture Strategy, is in full agreement. “Digital transformation officers will not be the silver bullet companies are looking for to drive new growth,” he says. “There is no transformation on-off switch, and it’s rarely ever initiated and driven by a single person, particularly in large, complex organisations.

“Disruptive growth needs to be the priority of the entire C-suite, where everyone is accountable, and it requires a new mindset, culture and philosophy that’s infused throughout the entire organisation.”

The rise of the chief transformation officer implies the converse view is gaining ground. Martin Lentle, country manager for the UK and Ireland at open source software company Red Hat, says the role brings together disparate parties. “It can be likened to a good orchestra; you need someone at the front with a single plan that is visible to all, helping the players through rehearsals to build a perfect performance,” he says.

Mr Lentle points out that the role may have existed under another guise for some while. “From meeting many C-level people on a regular basis, I have seen heads of innovation within an organisation change their title to digital transformation officer,” he says. “You could argue they are the same role, with updated terminology.”

Maybe it comes down to the nature of the company and its leadership. Some companies are in flux and need a visionary to find a way through the chaos. Others can do that with the existing C-suite talent.

The key thing is to look at what the chief executive does. “How do they spend their day?” asks Mr Vaz. “Do they obsess about the past and current? Then they are a Tim Cook-type leader. Or do they think primarily of the future like Steve Jobs?”

It takes a brave boss to admit they are struggling to galvanise the company for the future challenges ahead. But if the chief executive is overwhelmed, a chief transformation officer could be the way to kick-start change. The new board member can unite efforts across disparate departments and agencies. And get the organisation back on track.

Working for a struggling company leads to sleepless nights. If the cure for insomnia is a chief transformation officer, more and more boards will be making room for one.

Read more: C-suite: who they are, what they do and why they matter