Traditionally, graduates have not considered the insurance industry as a go-to career destination. Generally viewed as staid and lacking in innovation, it has neither been seen as sexy nor positioned as offering lucrative job opportunities.

But things are changing. Since the 2008 recession, customers have become less loyal, more price sensitive and more likely to shop around using price comparison websites. As a result, many insurers, particularly on the general and life insurance side, have had to become more customer focused to compete in ways that were unnecessary before.

To do so has meant turning to technology and the clever use of data, not least to keep the potential threat posed by insurtechs at bay.

Adam Gates, head of recruitment consultancy Odgers Interim’s insurance practice, believes such dynamics will result in the “insurers of the future looking and feeling much more like modern retail banks”. This means their operations will become increasingly digitalised and transparent, with the focus on mechanisms such as loyalty schemes to attract and retain customers.

But which are the roles shaping the future of the insurance industry?

Historically, insurers did not engage directly with customers. But general expectations of more personalised products and easy-to-use services, on top of the disruption to traditional business models generated by insurtechs, are inevitably generating change.

As part of this shift, the role of the chief marketing officer (CMO) is becoming increasingly vital not only to build a strong company brand, but also to be the “voice of the customer”, says Claire Sadler, marketing director at insurer Direct Line for Business. Being this voice involves “making sure customers are understood, and their needs are known and represented in business decisions, from product development to the service experience”, she explains.

A key challenge for many established CMOs, however, is being able to adapt to the fast-changing customer landscape and respond quickly enough to new challenges and opportunities, which includes employing cutting-edge marketing technology effectively. As a result, says Gates, recruiting people from “more customer-centric sectors, such as retail banking and telecoms, is becoming increasingly popular to bring in fresh thinking”.

Over the next five years, he also expects to see a rise in the number of currently rare chief customer officer roles as customers progressively move to the heart of insurers’ businesses.

The shift to a more customer-centric business model, plus a desire not to be left behind by digital startups, has resulted in a growing focus on how to employ data more strategically with the help of new technology, such as machine-learning. The aim is to improve everything from product innovation and customer acquisition and retention to risk and investment decision-making.

This momentum led to the somewhat belated arrival of the chief data officer (CDO) role into the insurance sector about 18 months ago, although in some instances, it has been rolled into the more traditional chief technology officer (CTO) position due to the close link between the two disciplines.

While in the past, such roles were viewed simply as offering support services to the business, they are now considered of growing strategic importance, not least to enable innovation, explains Steve Woodford, CTO of BGL Group, a digital distributor of insurance and domestic financial services.

“The CDO/CTO role is now pivotal to the success of any organisation in the insurance sector and I can’t think of a single aspect of any service offered to customers that isn’t materially impacted by it,” he says. “Using data to best effect to serve customers, ensure they get the best prices and a personalised service is increasingly how we compete.” 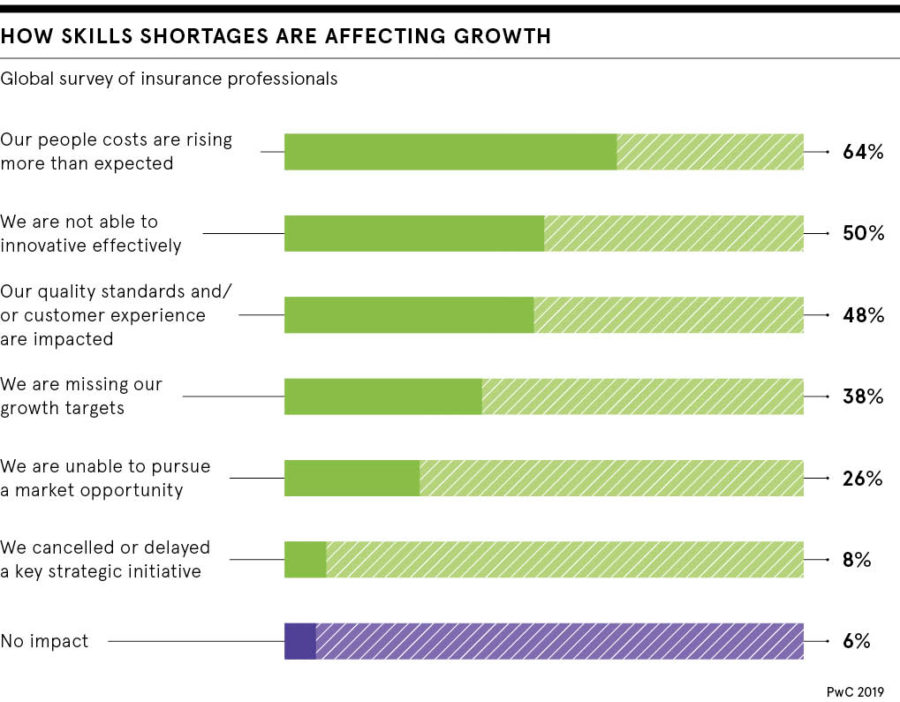 A key means of generating change in a traditional industry is for organisations to broaden their current talent pool and bring in new people from a diverse range of backgrounds.

Miriam Earley, global head of diversity and inclusion (D&I) at professional services group Marsh & McLennan, explains: “To deal with an era of disruption and fast-paced change, there’s a need for different ways of thinking as traditional ways of approaching work, clients and organisational strategy may simply not be right any more.”

But while the head of D&I role is already quite widespread, among larger organisations at least, it is an area that is still evolving. While the diversity element is about broadening the net to increase members of under-represented groups, the inclusion aspect involves embedding change into organisational processes ranging from recruitment to talent management.

However, for most insurers there is still some way to go, not least because they often neither fully understand what D&I professionals can bring to the table nor what they actually want from them.

Although traditional industries, such as insurance, are at earlier stages of the journey, says Earley, she expects the breadth and influence of the role as a catalyst for change to grow over the coming years.

During the next few years, existing corporate social responsibility (CSR) leadership roles are expected to morph into those of chief sustainability officer (CSO). The difference between the two is one of depth, with sustainability being less about individual projects and more about internal change at a systemic level, says Kelly Coombes, founder of consultancy Climate Risk Solutions.

“CSR was the starting point, but having a CSR officer was mainly a nice-to-have that looked good in an annual report,” she says. “Organisations are now realising, however, that there are commercial benefits to be gained from using sustainability metrics and the social, environmental and financial triple bottom line.”

But CSO positions are still few and far between. For example, industry giant AIG only appointed its first CSO last July to develop and implement an enterprise-wide sustainability strategy, covering everything from insurance and investment activities to its approach as an employer.

“There’s a lot of movement going on in the wider commercial economy and customers, employees and investors are all looking for companies to be more socially responsible,” says Coombes. “So the insurance sector will have to change, but many of those conversations just aren’t taking place yet.”

Changing customer expectations and the growing commercial pressures posed by new market entrants in the shape of insurtechs are making the insurance sector extremely competitive.

Moreover, the challenges faced by companies, particularly in pensions, and general and life insurance cover, due to the impact of an ageing population on policies, are leading to market consolidation. For many businesses, the aim is to grow by acquisition rather than rely on organic growth.

“Given how competitive the insurance market is, the need for astute asset and capital allocation strategies that ensure risk-mitigated investments is growing significantly,” says Gates. “This includes the need to ensure a watertight strategy, but also a governance and monitoring structure to track the performance of investments and the agility to reallocate where necessary.”

Other influences include the rise of activist investors, who are applying increasing levels of pressure on companies’ investment strategies. As a result, to cope more effectively with such dynamics, a number of chief investment officer roles have sprung up over the last few years, although they are yet to become widespread.

Into the future though, Gates expects to see this “increasingly scrutinised and regulated role” work very closely with the CSO to “co-ordinate sustainable investment portfolios”.