Time to bridge the gender gap in IT

The 2016 CIO 100 report by CIO UK found that only 16 of the top 100 chief information officers in the UK are women, a move in the right direction from the 12 listed in the previous year’s report, but a figure that remains stubbornly low.

The outlook is made even bleaker by UCAS figures showing the number of women studying computer science at UK universities has been falling.

There are many reasons for this lack of diversity, ranging from poor perceptions of IT as a career choice among young women and girls – a new Accenture study found that girls are more likely to view STEM subjects, which include technology, as academic and boring – to a lack of female role models in the sector.

In addition, as managing director of Hays IT James Milligan points out, many of the women who do decide to pursue a career in the sector are often guided towards client-facing roles.

He says: “This is thanks to the myth that women have better soft skills and also because a lack of flexible working becomes a barrier to those with family commitments. And yet around the world, employers are searching for people with IT skills.”

Others cite the gender pay gap as a barrier to women progressing into senior roles, not only in the IT sector, but across the board.

Julie Chakraverty, founder of advice sharing app Rungway, says: “Studies show many companies are far from gender pay parity. But when queried, many companies say they do pay equally for equal roles, and it’s just that women are over-represented in lower paying roles and under-represented in the highest. This thinking misses the point. We are in a candidate-led job market, so why would women choose to work for a firm with a structure like this? It’s time companies adapted themselves for greater equality.” 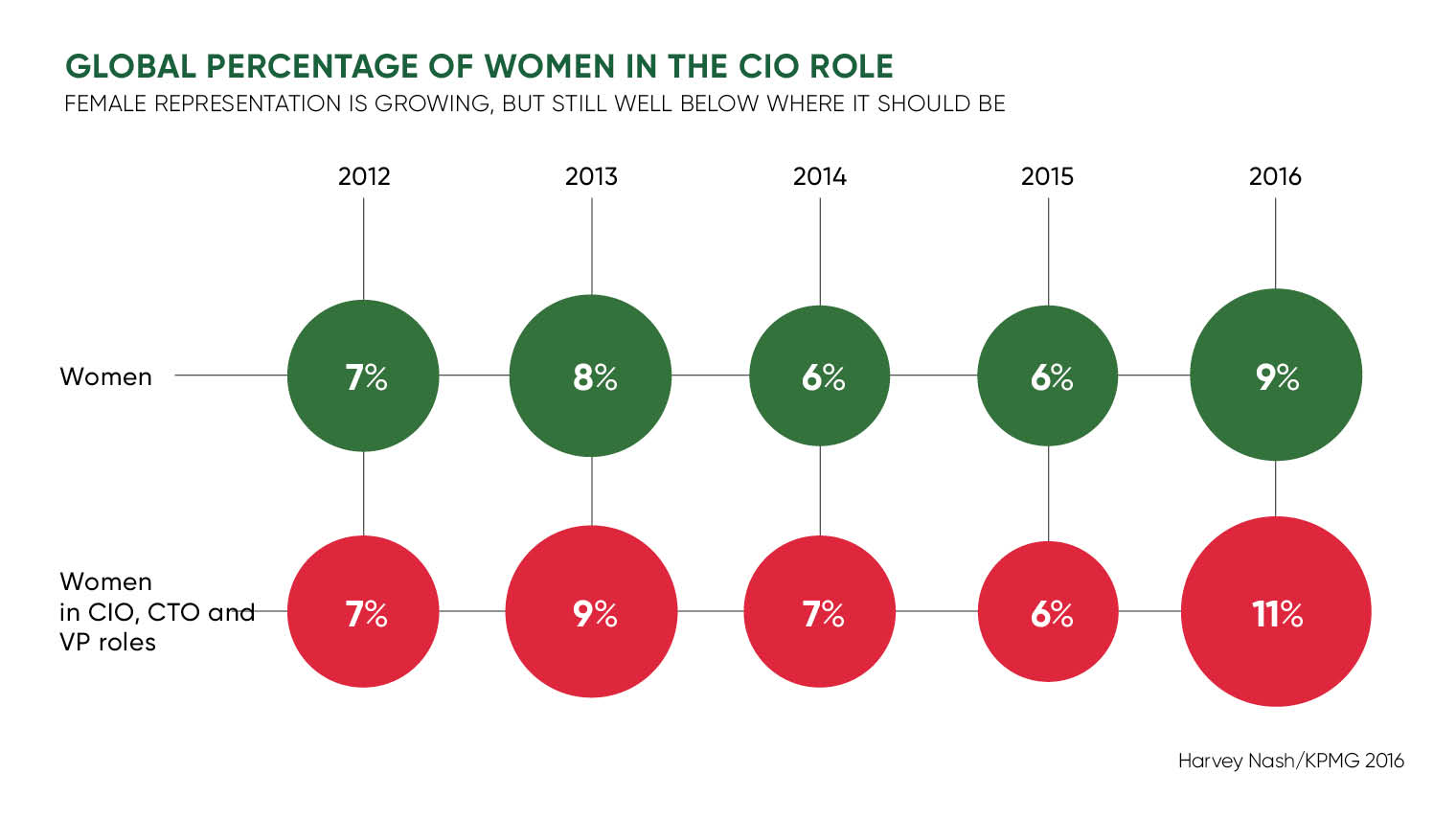 Many believe that the only way to increase the number of women in senior IT roles is to look at the CIO pipeline and understand the root causes of losing women at early, mid and late-career stages, and create proactive programmes to address these issues.

Sarah Andresen, head of people science at global human resources software company Fairsail, says: “Two key factors impacting women’s career progression are unconscious biases and the current lack of women in leadership positions. For example, with few women in leadership positions there is a scarcity of mentoring and networking opportunities for them in the earlier career stages, so women have limited options to build relationships with today’s leaders to enable their careers to progress.”

Ultimately, responsibility for improving gender diversity in the sector falls to everyone, from government, businesses and the wider technology industry, to parents and peer groups, says Geoff Smith, managing director at Experis, UK and Ireland.

“Traditional perceptions need challenging, starting in early education and continuing throughout our careers,” he says. “The tech industry is innovative, fast paced, exciting and stimulating, and this needs to be better communicated to women and girls from a young age, so they aren’t routed down career paths that are less tech focused.”