CIOs at the heart of digital shift

There’s a shift going on in businesses across the globe. Bricks and mortar are being replaced by pixelated inventory, paper trails become e-mail audits and assets sit in a data centre rather than a warehouse. Increasingly corporations are spearheading a digital-first strategy. Pivotal to this is the CIO or chief information officer.

That’s because businesses are increasingly battling it out on a digital playing field, no matter which sector they’re in. As Vijay Gurbaxani, professor of IT at the University of California, points out you’re now competing with the likes of Airbnb in hospitality, LinkedIn in recruiting, Uber in transportation, Google in automotive and Netflix in television. All of which are data driven with little in the way of physical assets. 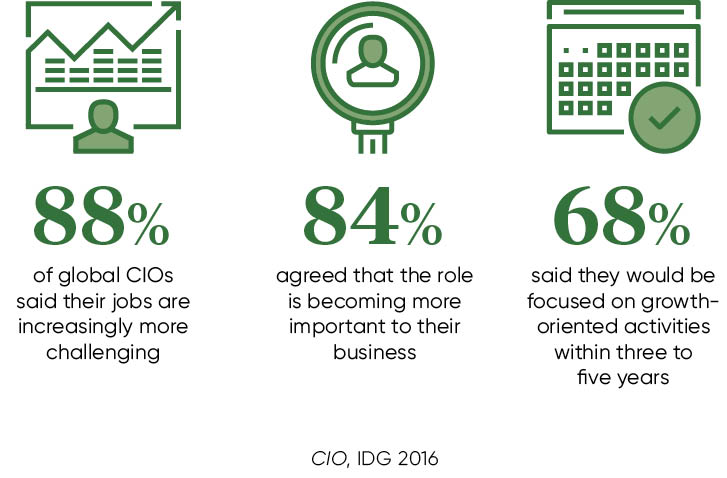 “Every aspect of the CIO’s environment has moved on considerably. Data is now required behind seemingly every decision. We have vastly more data, more intimate data that we get far faster, which we can process more meaningfully and more quickly,” explains Tom Goodwin, head of innovation at Zenith USA.

In this data-fuelled era, the CIO has a fundamental role in determining how organisations thrive, especially in sectors disrupted by digitisation. Increasingly, IT isn’t just tinkering at the edges of corporations or acting in silos, but upending whole business models and transforming the core.

“Every CIO’s dilemma should be that their overall goal is first to champion change from the side, then become the heart of the company, then become a spirit and way of working in everyone, and then to make themselves redundant,” says Mr Goodwin.

Technology solutions now permeate every element of business from the delivery of goods and services to customer experience, human resources and finance. Data can be used quickly, end to end, to make better-informed business decisions. However, the adoption of a digital-first strategy is still patchy across industries, businesses and countries.

“Previously it was expensive, there were barriers, but not any more. The issue is getting people to realise how they can achieve it. If you embrace the digitisation of your business, you can win,” says Mark Lavelle, chief executive of Magento.

This new elevated role represents a serious challenge. Expectations to deliver are huge. There are still many constrained cultures, as well as legacy systems to tackle, which are the bane of the CIO’s life. Executives also have new problems, such as how to cleanse and access data, as well as manage it across systems. Not to mention dealing with the Luddite class of pre-digital, middle managers.

In this data-fuelled era, the CIO has a fundamental role in determining how organisations thrive

“Many businesses were configured 30 years ago, in a time when analogue was king. It’s an issue,” says Mr Lillie. “Yet the number-one reason CIOs lose their jobs is because they just aren’t digital enough. The best CIOs get it. In this role you need to communicate the transformational process that needs to happen and the benefits a digital-first campaign can bring. One problem with CIOs is that they tend to come from a technology background, who have historically done geek speak.”

Traditionally, CIOs have grown vertically through organisations, mainly through IT departments, with a focus on tech. These CIOs tend to struggle more than those who’ve had a varied background in terms of industry exposure.

The fact is the skills the future CIO needs are very different to those required just five or ten years ago. CIOs now need to speak the language of business and position IT in a way that all executives can act on. They also need to preach about the benefits of a data-driven business model that workers can understand, but also have a good chief technology officer (CTO) to implement it.

“The CIO should have the creativity skills of a marketer, the oratory skills of a professional speaker, the persuasion skills of a change manager, the commercial awareness of a sales manager, as well as all the skills required to deliver upwards,” says Antoine Boatwright, CTO at Hillgate Travel.

It’s a big ask, yet there are tools that help CIOs achieve their goal. One is reverse mentoring, which Deloitte encourages, where younger digital natives mentor older, senior executives in a bid to show them the possibilities that data-driven strategies can bring. Or mash-up days where teams from across a company think of how they can innovate in a digital-first environment.

But there are warnings in this data-driven age. Mr Goodwin cautions: “No data suggests Red Bull would thrive or that Innocent smoothies would create a breakthrough category. We need to get to a point where every department is flushed with data, but not obsessed with it. It’s like oxygen, it’s both the central point to everything, but also invisible and pervasive. It becomes the background element, but a supporting role. The future of the CIO is to ensure that data has this role.”