A survey of children in the UK asked what jobs they’d like to do when they grow up. The top ten answers were mainly predictable: vet, teacher, firefighter, soldier and so on. These are exactly the sort of things their parents might have answered, but there is now a new entry – social media star or pro-gamer, at number four.

Procurement has become the nexus where all technologies meet. Artificial intelligence (AI) is amusing when deployed to tell consumers the weather via Amazon Alexa or Google Home, but only lives up to its potential when used to procure an entire supermarket’s stock of 90,000 products with zero human input.

And AI is just the start. A chief procurement officer must be fluent in the lingo of data analytics, know the mechanics of risk and be a master of world geography as they co-ordinate extended supply chains to all places on the planet. And just when the job description seems complete, another major mission is added to the list.

With consumers more aware than ever of their impact on the world, procurement is under scrutiny to ensure ethical sourcing throughout the supply chain

The latest? Spearheading the transition to ethical trade. “With consumers more aware than ever of their impact on the world, procurement is under scrutiny to ensure ethical sourcing throughout the supply chain,” says Jonquil Hackenberg, head of C-suite advisory at Infosys Consulting.

The ethical challenge is twofold. The chief procurement officer must first identify ethical suppliers and malefactors in emerging economies, says Ms Hackenberg. And second: “The CPO must rely on the latest technologies to provide ‘proof’ of sustainability, such as provenance of product, but also must focus on how people across the supply chain are being treated.”

Gap and H&M are the latest brands to take a hammering for failings in this area. The press reported the way Indian and Indonesian suppliers to the brands allegedly treat their workers: “Abuse is daily reality for female garment workers” splashed one newspaper. Both fashion outlets vowed to investigate the claims. So, is procurement dull? In cases like this a chief procurement officer has the power to transform the working conditions of entire nations. 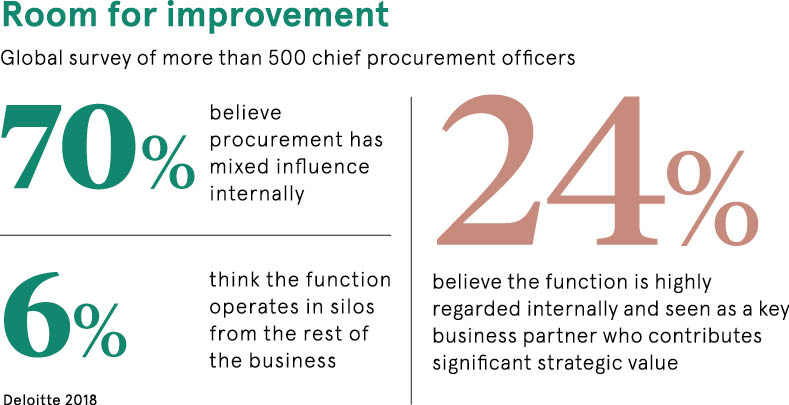 Procurement algorithms, from particles to pineapples

The ultimate proof of the soaring status of procurement is the sheer calibre of candidates it attracts. The Large Hadron Collider at CERN is the pinnacle of scientific endeavour, proving the existence of the Higgs Boson. Yet dozens of the top academics at CERN have quit to work in procurement, where their algorithms can continue to work their magic.

Professor Michael Feindt, a key figure, founded procurement algorithm specialist Blue Yonder, which helps the likes of Morrisons and Lufthansa automate prices and supplies. The same algorithms Professor Feindt developed for CERN are now helping supermarkets estimate the precise numbers of pineapples to order on any given day and placing the order. It’s no less of an intellectual challenge.

Procurement is the job that embraces all roles: tech whizz, ethical investigator, robotics pioneer, finesser of finance and king of blockchain

The class of 2018 in procurement sees another new character emerge in the blockchain expert. Will blockchain revolutionise procurement utterly? That’s for CPOs to figure out, but one school of thought says “yes”.

“Blockchain really, honestly, has the potential to have a huge impact on procurement and sourcing,” says Eleanor Winn, co-founder of Work Futures, a procurement supply chain automation consultancy. “A move to distributed ledger technology such as blockchain allows for a single, immutable, secure record of every transaction to be maintained, eliminating the need for all this local work within the four walls of each enterprise. Maersk and IBM are predicting that their new blockchain platform will save the global shipping industry billions of dollars a year.”

Blockchain really, honestly, has the potential to have a huge impact on procurement and sourcing

Not everyone agrees blockchain will have an impact. “It might do, but not any time in the next few years,” says James Bousher, operations performance manager at international consultancy Ayming UK. He says systems may not be interoperable. “Until everyone agrees on a universal blockchain protocol, you’re going to be left with many different systems based on blockchain, which may not talk together without integration,” says Mr Bousher.

Plus the technology is placing too much pressure on a role already inundated with new ideas. “A lot of people still don’t understand what blockchain really is. At a recent Procurement 2020 CPO roundtable that Ayming hosted, when asked if blockchain was having an impact in their business, only one attendee could even articulate what blockchain is, let alone explain how it might impact their business,” he says.

Procurement is now so central to performance that even a credit rating can depend on the methods used by the department. For example, in the last five years there’s been a boom in cloud-based procurement and invoicing platforms such as Tradeshift and SAP Ariba. These systems bring together millions of companies on a single integrated digital system. Users can order from each other and invoice, without ever leaving the platform. It means the entire supply chain and finance is digitised. Manual processes, including paper invoices, PDFs, Excel spreadsheets and so forth, are obsolete.

And since the supply chain and finance are improved and transparent, banks can make a clearer assessment of the financial strength of a borrower, lowering borrowing costs. Cash flow is boosted too, leading to a further lowering of risk.

Procurement is the job that embraces all roles: tech whizz, ethical investigator, robotics pioneer, finesser of finance and king of blockchain.

Kids may want to be YouTube stars or firefighters. But if they want a job that has the lot, it’s one they’ve never heard of.