Creative thinking is in short supply. Can understanding how the brain works, and how our workplaces can impact it, solve the crisis? 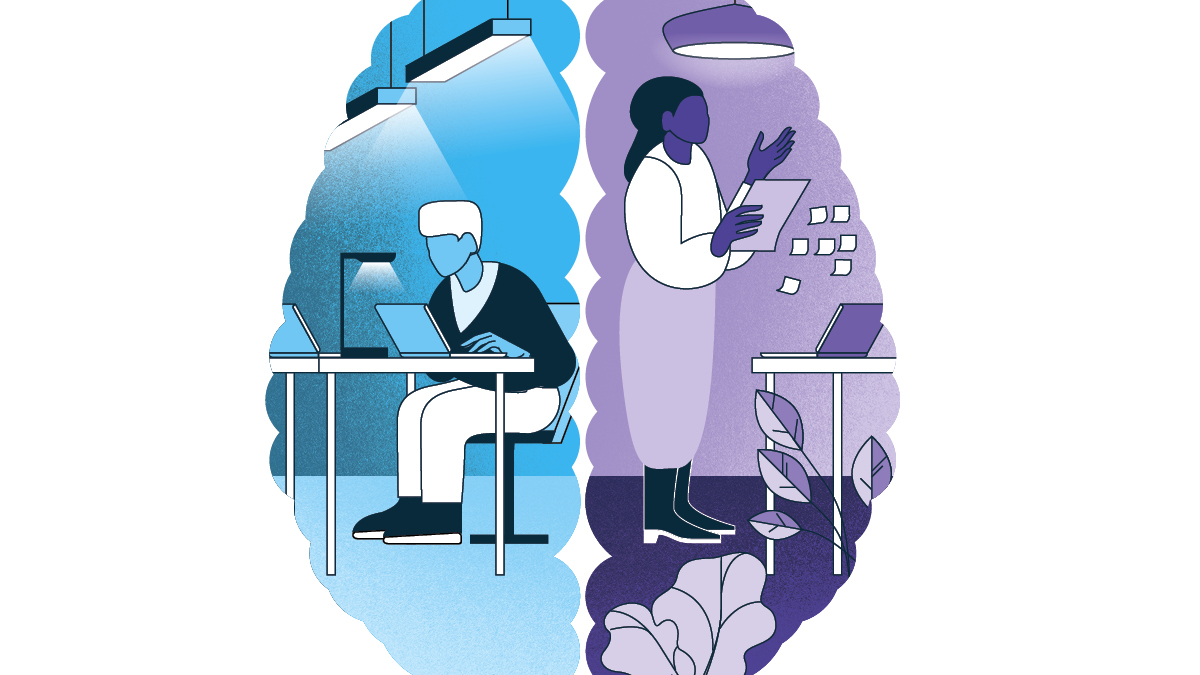 If someone managed to bottle creativity and sell it to businesses globally, they’d be a billionaire. The elixir is in short supply in the knowledge economy. It’s why there’s a whole industry trying to create the ultimate workplace model, reconfiguring the office to supercharge employees and spark innovation. But they’ve forgotten the most important element: the human brain.

The most complex organ in the known universe is still our best untapped resource, yet it’s divided. The left and right sides interpret the world differently, influencing how we work. The left brain likes detail, is goal orientated, with a narrow and short-term focus. The right is more insightful, since it sees the broader, contextual picture and is vital for original thought.

The creative’s office used to be a space for silliness, a laugh, to be naughty, and right-brain creativity

Surveys show creative thinking is a skill that’s in short supply. Is this due to an epidemic in left-brain thinking that’s highjacked our lives? Key figures in advertising and media think it’s a full-blown creativity crisis. They believe that similar shifts in thinking style have occurred down the centuries. Citing examples from the Renaissance to the Reformation, as well as today’s lack of advertising effectiveness.

“Culture oscillates between left and right-brain periods; we’re now in a left-brain dominant era, one where productivity trumps creativity. People have become too analytical and focused on linear processing. People are seeing this in their personal and daily lives, and with this crisis in creativity we’ve lost our fifth taste bud,” explains Orlando Wood, chief innovation officer at System1.

This diagnosis has wider implications for the global workplace culture. Wood’s analyses are based on the work of Dr Iain McGilchrist, psychiatrist and brain expert, who has detailed the left-brain dominance of societies through history and the issues it causes, stifling innovation.

“The left hemisphere thinks there must be a quick fix, but there isn’t. We need to change our culture. Thriving communities can fall into ruin. We may be repeating this pattern, which is clearly visible at the end of the Greek and Roman civilisations, as well as today in the West,” says McGilchrist, author of The Master and His Emissary.

Left-brain domination of workplace culture can be seen everywhere. The open-plan office is an example, where you’re able to see most colleagues and the boss, who sits directly behind you, along with managers monitoring what employees are doing. “It’s all about power and control, where people feel the need to watch over others; this is a left-brain tactic,” says Wood.

“The client lunch has gone, which was great for right-brain, creative conviviality. Timeframes are compressed, which promotes left-brain focused goals. Today nothing happens behind closed doors. The creative’s office used to be a space for silliness, a laugh, to be naughty, and right-brain creativity.”

During morning news meetings at The New York Times, journalists now take it in turns to read a poem out loud. The aim is to inspire and boost creativity with say a bit of William Wordsworth at the start of the working day. Most definitely, an ode to right-brain thinking.

“Creativity has always been stifled in traditional workplaces; we’re just now becoming aware of it because we’re suddenly focused on innovation. When it comes to creativity, if you want to light a fire, get back and let it breathe. Set people and their minds free,” says Andy Swann, author of The Human Workplace.

How to create space for right-brain thinking

Acknowledging your workplace culture might dampen down the right, creative side of the brain is a start. But sparking it up involves more than just a smattering of novel art installations, a few bean bags and funky breakout rooms. Amazing looking spaces and enforced rules aren’t suddenly going to supercharge free thought. This happens on the walk to work, in the shower or when you’re idle.

“Creativity isn’t something that can happen to order, but it can easily be prevented from happening. You can’t make a plant grow, but you can certainly kill it off. So create space and then stop doing most of the things you think you must do, since they probably will get in the way,” says McGilchrist.

“Relaxation, informality and spontaneity are helpful. Stress and pressure make people narrow their focus. Fragmentation of attention, distraction and anxiety caused by smartphones and the media lead to issues too. There is a lot to be said for banning them in the workplace. I have banned them from my life.”

No Brainer, a content marketing agency, has even put the issue at the centre of their company’s ethos. They ban devices during creative sessions, and recognise there’s a diversity of thought among employees and a need to be inclusive within a workplace culture.

“People operate with different levels of left and right-brain thinking, that’s why our offices reflect a healthy mix of spaces that embrace both. This means there’s consistency across the team when it comes to their ability to be creative and in a space that suits them,” says Gary Jenkins, managing director of the Warrington-based company.

Therefore, the workplace of the future is about giving people the tools and physical space to explore right-brain creativity on their own terms. The environment should be an empowering one. Then we might see change.

“There’ll never be one way that suits everyone. But free people up, as much as you dare. We should be encouraging free-thinking with a light, not a heavy, hand on the tiller. No one is happy being reduced to a cog in a machine,” McGilchrist concludes.