Walking around the office of 2030, it is fair to assume that technology will play an even bigger role, but it may not be time to write human workers off just yet

If we could take a walk around the future workplace, what would we see? Over the last decade, globalisation and new technologies have brought tremendous change to the way we work. Without a doubt, how businesses communicate, collaborate and engage their workforce is set to evolve, if current technological progress and trends continue. What could the future connected business of 2030 look like?

Who does the work in the future workplace?

Automation has been changing the way we work. So, will the future workforce still mostly be human or will it comprise robots and digital workers?

“The speed of new technology is so rapid that we often don’t realise a lot of the tech we already use is ‘automation’ in the workplace,” says Sanna Ojanperä, an Alan Turing doctoral student at Oxford University’s Internet Institute. We’re not aware of the extent to which automation is already central to our work.

Almost a century ago, British economist John Maynard Keynes made some predictions about the workplace of 2030. He argued that the ability of machines to take over human jobs outpaced the economy’s ability to create new and valuable jobs for people. The upshot would be that soon we wouldn’t have to worry about work at all.

Keynes thought that by the year 2030 technological progress would have freed humans from “the struggle for subsistence” and brought us to “our destination of economic bliss”. Machines would be doing all the work, while we’d live in a society of abundance and enjoy our free time. But, so far, this hasn’t materialised.

While machines have been replacing us, we have moved on to new jobs. It is estimated that 75 million jobs may be displaced by a shift in the division of labour between humans and machines, while 133 million new roles may emerge, according to a report by the World Economic Forum. So it’s more likely that robots and people will work side by side.

Will this make our jobs better or worse? In his controversial essay On the Phenomenon of Bullshit Jobs and eponymous book of a similar title, anthropologist David Graeber charted the rise of so-called bullshit jobs. He defined them as “a form of paid employment that is so completely pointless, unnecessary or pernicious that even the employee cannot justify its existence”.

Gaeber argued that people with productive jobs, say, ambulance drivers, nurses and teachers, are increasingly overworked, while “flunkies, goons, duct-tapers, box-tickers and taskmasters” have multiplied. Will robots take up our bullshit jobs? They might, but not if humans still need to monitor and service them.

In our working lives, we have all had a meeting that could have been covered by an email. Just like the bane of presenteeism – the practice of being at a desk purely to be seen as present – lengthy meetings are increasingly frowned upon.

Will we still have long-winded, face-to-face meetings in the future workplace? Or will we interact with our colleagues and clients virtually? 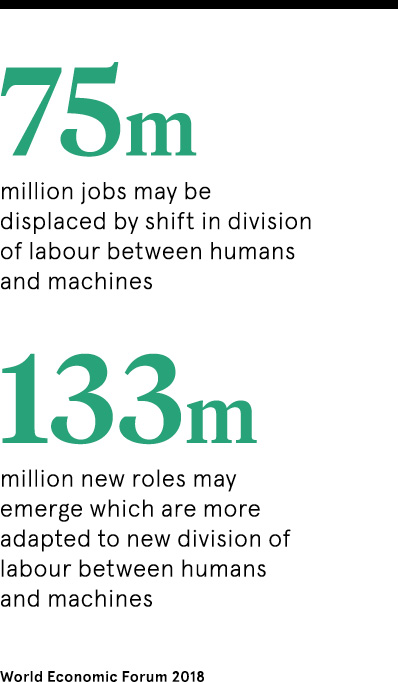 The exceptional circumstances brought about by the coronavirus might be a turning point for how we communicate at work. Since the outbreak of the virus, the share price of remote conferencing platform Zoom Video Communications has gone up by 65 per cent. Even a company that has been mistaken for Zoom, because it has a similar name, has seen its share price surge multiple times.

The current demand for virtual meetings is unprecedented, but collaborative technology’s long-term implications are just as powerful.

Virtual reality is already in use to train medical staff in low-frequency, high-risk situations. Expedient face-to-face meetings will always exist. But the rise of self-employment further buttresses the fact that virtual working will become commonplace.

In the UK, self-employment has increased by 11 per cent in the last five years: 8 per cent for men and 18 per cent for women, according to IPSE, the association of independent professionals and the self-employed. In the absence of well-funded parental leave or flexible work arrangements, some parents choose to set up on their own, for example.

There are many factors that will influence our future workplace besides technology; globalisation, for example, means our work is evermore connected. Will we even have an office in ten years’ time or will our colleagues all be working remotely, spread out across the globe?

“In our report on remote working, we found that 93 per cent of freelancers surveyed thought working away from the office improved their working experience,” says IPSE’s Barnett. “Working from home is getting evermore popular as people try to fit their work around their home lives more. There is perhaps a case for it being better for the environment as people will travel less too.”

Rising property prices in big cities add to the attraction of remote working. Whether remote working is possible depends on the industry, of course. In the health or the care sector, it’s less feasible, but even there, virtual technologies help surgeons coach each other across the globe and GPs already conduct consultations through apps.

“Our research has shown that 97 per cent of remote working is done from home and 87 per cent of freelancers have worked from home,” says Barnett. Given the rise of remote working, we may see some firms moving towards having one smaller central office and more flexible workers, either self-employed people or employees working remotely.

Some companies have already done away with having an office. Others have set up at WeWork or other serviced offices, which might have been a story of entrepreneurial hubris, but also shows we’re craving a more creative, hipster, flexible and interconnected place of work.

The downsides of remote working include a sense of loneliness and disconnect. Barnett says: “Loneliness and mental health are key issues for the self-employed, and we hope that as more people start working remotely in the coming months, the government will start giving due considerations to these questions.”

One solution is for freelancers to work side by side in small groups. This is already happening at cafés, libraries, local co-working spaces and hubs for global nomads.

How can we prepare for the future workplace?

What’s the upshot of these changes? Skills that are inherently human will gain currency. “Non-routine and more complex tasks that tend to require cognitive skills or emotional qualities are likely to be less affected by automation,” says Ojanperä at Oxford University’s Internet Institute.

According to a 2019 survey by CareerBuilder, 80 per cent of employers said soft skills, such as interpersonal intelligence, critical thinking and good communication, are equally or more important than hard skills when deciding whether they hire a candidate.

As a consequence of automation, sectors “with a predicted net increase of jobs could include health, professional, scientific, technical services and education, while those likely facing net job losses might include manufacturing, transport, storage and public administration”, says Ojanperä.

So while the future workplace will be more technologically connected, it’s crucial we strengthen and invest in the human elements of our work.