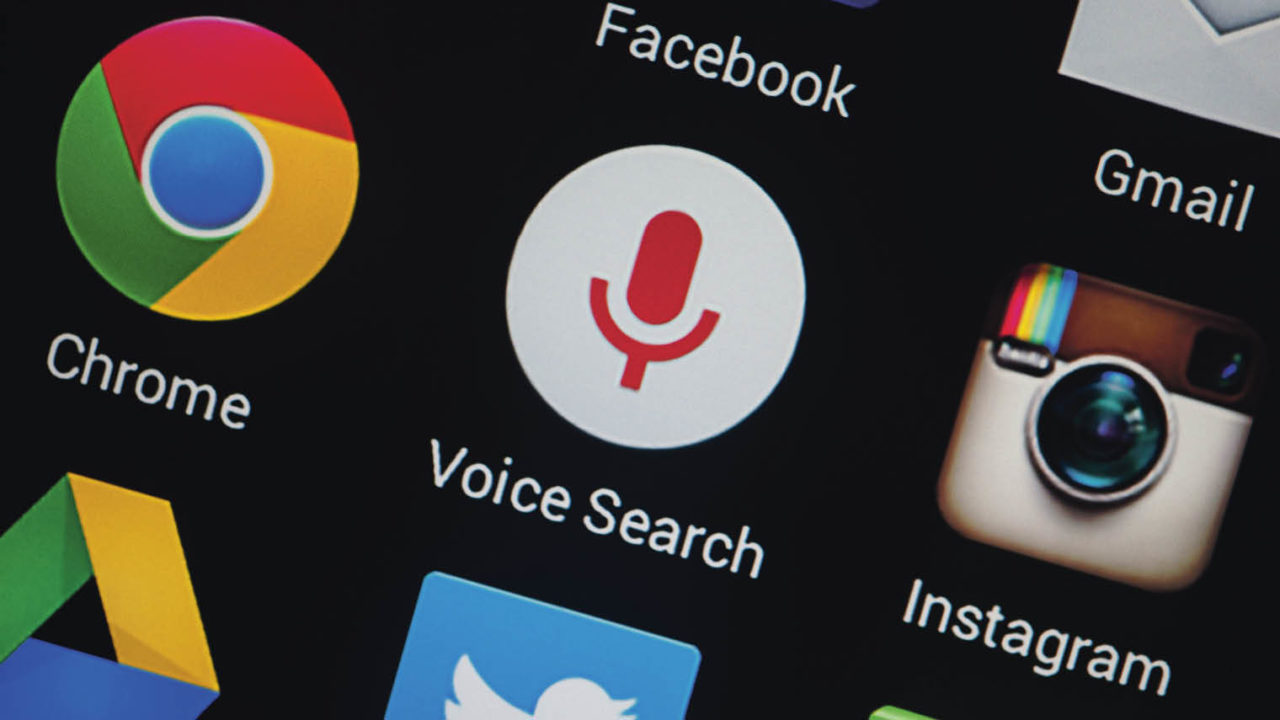 It may not be long before any smartphone user will be able to type or say “I want a flight from London to New York this Thursday” in a messaging app and almost instantly a message showing a list of flight times, prices and carriers will be received, with buying tickets and checking-in all available within the conversation.

The convergence of highly popular messaging apps and advanced artificial intelligence (AI) is allowing businesses to interact with their customers in innovative new ways. Chris Messina of taxi disrupter app Uber popularised the phase “conversational commerce” to describe the trend.

Messaging apps such as Facebook Messenger, Slack and WhatsApp have quickly become the most popular way to communicate, with more than 80 billion messages sent every day, providing the perfect environment for conversational commerce.

The Chinese messaging app WeChat has been at the forefront of conversational commerce with its more than 700 million users being able to do everything from ordering food, booking a flight or hailing a taxi, all in the app. Facebook recently made its move into conversational commerce by partnering with Uber in the United States to let users order taxis through its Messenger app.

In a sign that we are only seeing the very start of conversational commerce, Facebook’s director of platform partnerships Julien Codorniou said the Messenger app was just “1 per cent finished” and “one day there will be companies built on Messenger and we are at the beginning of that ecosystem”.

Conversational commerce has quickly become a major talking point, but will it be able to meet consumers’ ever-changing needs? Using chatbots and digital assistants to interact with businesses is by no means a new phenomenon, but their increasing popularity is attracting the attention of a wide range of small to medium-sized firms, as well as major listed companies. The ability of these technologies to deal with common inquiries or assisting users to shop online whenever they want to is a key feature.

“Once an interaction has begun online, most people are reluctant to shift format, so digital assistants and chatbots come into their own when users run up against a problem, have a question or can’t find what they’re looking for,” says Stephen Long, executive vice president at systems integrations and unified communications provider KCOM. The conversational assistants of today can understand complex sentences and recognise abbreviations, so activities can be carried on seamlessly and digitally. But there may be a limit to the application of these technologies.

Although chatbots have made major advances in the past few years, they still have a somewhat patchy reputation. While these digital assistants could prove useful for relatively simplistic requests, when it comes to customers looking for personal recommendations or resolution to a specific problem, they offer a disappointing experience. 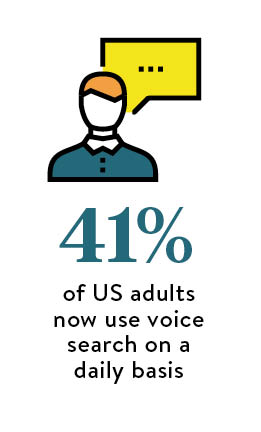 Adam Levene, founder and chief executive of London-based conversational commerce platform Hero, believes people are far better suited to providing support. “They offer far more responsive assistance to customers than a bot could. When it comes to artificial intelligence versus emotional intelligence, there is no substitute for the human touch,” says Mr Levene.

Voice search is also growing rapidly with the most recent Google Mobile Voice Study finding a 61 per cent growth in longer queries that start with “who”, “what”, “where” and “how”. Google analysts noted that one in five queries on the mobile Google app are voice-based and they get about 30 times more action queries by voice than by typing.

These changes in consumer behaviour will mean brands will need to optimise their content in order to appear in relevant results shown to users. More than half of US teens and 41 per cent of adults now use voice search on a daily basis, indicating this functionality is already playing an important role in search queries.

There is no shortage of voice search services, such as Microsoft’s Cortana and Android’s Ok Google, available on both mobile and desktop devices. “The interesting thing about voice-recognition technology and conversational commerce is the level of intimacy it brings to interactions. There’s an immediate feeling of personalisation, but also humanness as you’re being given immediate verbal feedback, just like a live conversation,” says Lucie Greene, worldwide director of the Innovation Group, J. Walter Thompson’s trend-forecasting consultancy and innovation unit. 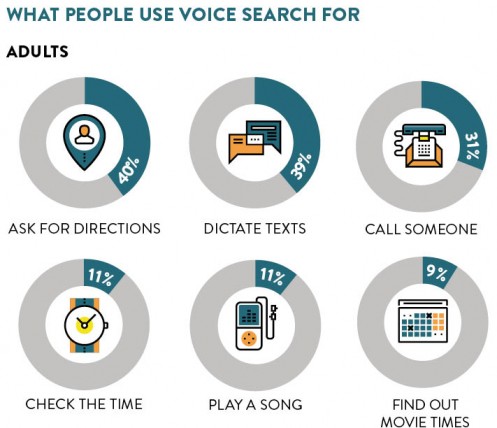 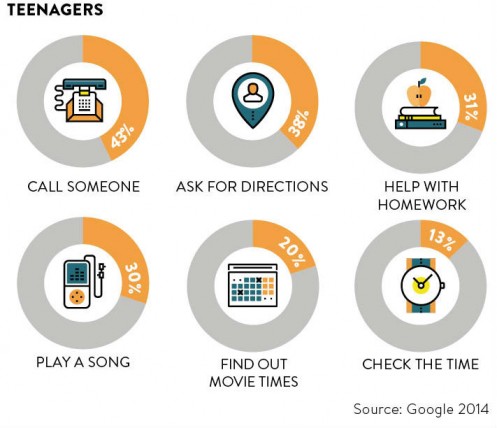 We are, of course, aware these exchanges are purely programmatic, but it feels more like a real chat than any other simulated conversation. “The two-way interaction in commerce and the fact that it’s an audio conversation also makes shopping feel more experiential,” adds Ms Greene.

This shift towards convenience and personalisation removes barriers that have traditionally hampered consumer engagement, as the need to physically interact with digital devices can be completely removed. Voice recognition allows users to multitask like never before.

“It makes infinite situations shoppable for the first time. Instances where you would be cooking and unable to shop or driving and unable to use a service are now connected to commerce. They essentially make your life more shoppable,” says Ms Greene.

When speech-recognition software was initially released, it failed to meet many users’ high expectations, due to widespread problems around understanding even basic responses. Thanks to advancements in AI, voice-recognition technology has made good progress in just a few short years. “These systems have become much more sophisticated. They are now able to differentiate between regional accents or even detect if the customer has a cold. This level of accuracy means they can now offer fully automated services for common requests, simple applications and transactions,” says Mr Long at KCOM.

“Having technology that manages customer relationships securely, conveniently and efficiently in any language, with no extra effort from the customer, ticks a lot of boxes for multichannel retailers,” he says. Voice-recognition software may still have to deal with unresolved issues such as background noise disrupting speech and incorrectly interpreting the context of similar sounding words, but these difficulties are on course to be resolved within the next year. 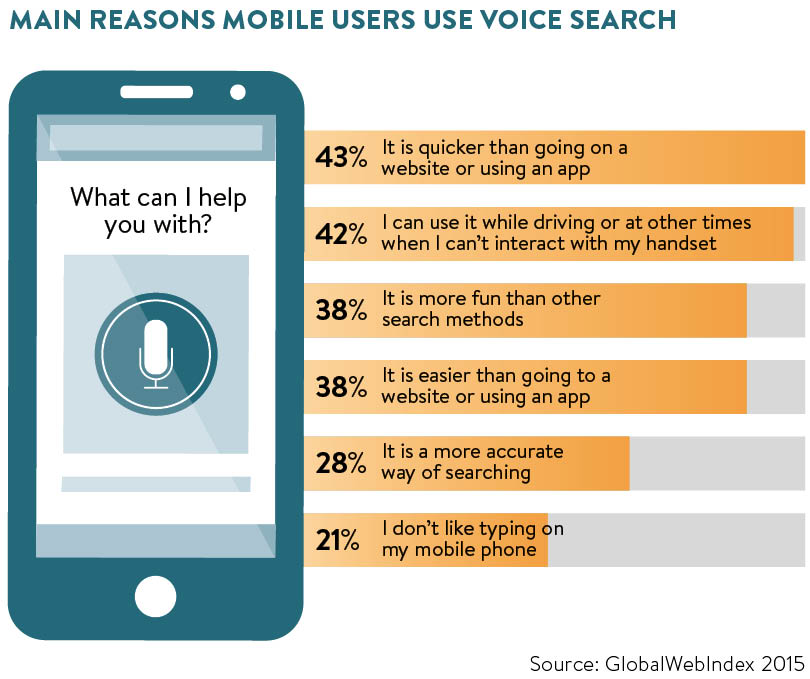 The expansion of conversational commerce gives businesses access to massive amounts of consumer data, leading to more personalised user interfaces. Creation of an interface that reduces the user’s cognitive load – the amount of mental effort being used in the brain’s short-term working memory – is a common aim, but is a fully cognitive website now approaching reality?

Frank Palermo, executive vice president of global digital solutions at VirtusaPolaris, a leading provider of IT consulting and outsourcing services, thinks the introduction of cognitive websites will come sooner than expected. Mr Palermo is currently working with IBM on the Watson project and is deeply involved in cutting-edge AI technology, similar to that powering Alexa and Google Home.

“Retailers can build an exceptional cognitive website, one that offers a deeply personalised and ambient experience to each customer as the brand gets to know them,” he says. “Creating such websites is no longer an unrealistic ambition, but if consumers are doing their purchasing via digital assistants, such as Amazon’s Alexa or Google Home, they will be rendered useless because digital assistants don’t behave like human shoppers.”

Whereas people can be influenced by past brand experiences and visual attraction when considering a purchase, for digital assistants this is irrelevant. “Businesses will need to adapt to a new generation of consumers who make purchases via a digital assistant, intermediating the customer experience,” says Mr Palermo.

Businesses need to adopt effective conversational commerce strategies if they want to capitalise on the opportunities this new market offers. The revenue generated by these platforms is no small change with research and advisory firm Gartner expecting a total of $2 billion in sales will be driven by digital assistants this year alone. The growth of conversational commerce means that in the near future it will become a key part of most companies’ digital approaches.

This movement can provide an opportunity for businesses to reset how they interact with customers, according to Hero’s Mr Levene. “For centuries, commerce was about relationships between people. With the birth of e-commerce in the late-1990s, businesses traded the human touch for unlimited choice. Conversational commerce is paving the way for a third wave of commerce, combining the human touch with the convenience of digital,” he says.

High-touch industries such as retail are expected to be the most impacted by this shift. “Conversational shopping reimagines the role of the store associate and empowers them with the tools to become digital personal shoppers,” says Mr Levene. These workers will be able to make immediate recommendations through chat and showcase products on live video, creating a hybrid between browsing in-store and shopping online. “Customers now have the best of both worlds, with shopping becoming as effortless as messaging a friend,” he concludes.