Unravelling the mystery of radiotherapy

Cancer treatment and care has made enormous progress over recent years, with a significant improvement in survival rates and quality of life after cancer. Much of this is down to the evolution of radiation therapy.

Around four in ten of all NHS cancer patients are treated with radiotherapy and last year Simon Stevens, chief executive of NHS England, announced a £130-million upgrade of NHS radiotherapy services.

First used to treat patients in the early-1900s, radiation therapy has changed beyond recognition, in terms of both effectiveness and safety. Yet the mere mention of the word radiotherapy creates panic among patients and their families. Myths and misconceptions about radiation therapy have proven surprising difficult to shift, which instils fear and hesitation when it comes to considering the appropriate treatment options. 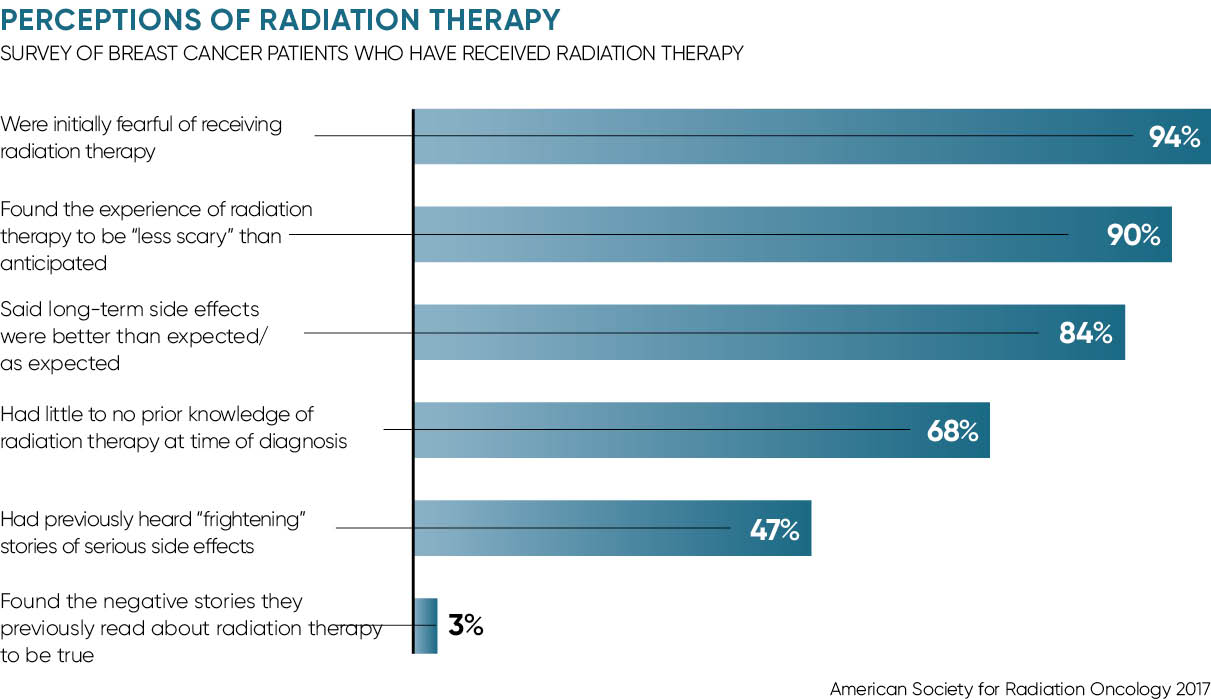 Many concerns are rooted in outdated views of how radiation therapy was used 20 or 30 years ago. Although the internet is a useful resource for up-to-date information about radiation therapy, there is also plenty of misinformation, which causes confusion and perpetuates many of the enduring myths. Some cancer patients, for example, mistakenly believe that radiation is painful or that it may make them radioactive.

Part of the problem is that radiation therapy is not easy to understand. Whereas surgery and even chemotherapy are procedures that are familiar to patients, radiation therapy is a much more alien concept. In many people’s minds it has also become entangled with emerging treatments, including nuclear medicine.

The first step in unravelling the “mystery” of radiation therapy is to explain how it works. The treatment is designed to damage or kill cancer cells, destroying the genetic material that controls how cells grow and divide. Cancer cells, unlike healthy cells, do not heal well once they are damaged. The goal is to deliver non-lethal doses over a number of sessions so that the cancer cells have accumulated enough radiation to destroy them.

In recent years radiation therapy has evolved to deliver targeted treatments with great precision. In effect, modern radiation therapy is about using the latest technology to avoid hitting healthy cells, protecting vital organs that may be close to treatment areas.

Radiation therapy does not cause nausea or vomiting and does not cause horrible burns. It is typically painless and is similar to having an X-ray. It cannot be felt during the actual treatment. Tools and technologies have been developed to reduce radiation damage to healthy tissue and lower the risk of debilitating side effects in treatments for prostate cancer, for example, protecting the bowels and rectum.

But for many cancer patients external beam radiation treatments usually require little or no recovery time. Fatigue and skin reactions are the most common side effects, and it is not unusual for patients to go about their normal daily routines after each treatment session.

Another widely held misconception is that radiation treatments are given to patients who are dying to obtain some symptom relief. It is true that radiation therapy is an effective way of treating metastasis in the body, for instance for pain relief. But radiation therapy plays an important part in treating a wide variety of cancers, and this includes some early-stage cancers and cancer in younger people.

Risks from radioactivity used in radiation therapy are often a concern for patients. But treatment generally does not leave any radioactive substance in the body. It is safe to be around loved ones, pregnant women and children. No radiation precautions need to be taken.

Dr Narek Shaverdian, lead author of the study and a radiation oncology resident at the David Geffen School of Medicine at the University of California, Los Angeles (UCLA), says: “Radiation oncologists know first-hand that our patients come in with fears and sometimes misconceptions. Unlike many other treatments and fields of medicine, it is very hard to imagine what radiation therapy is like.

“Still, it is surprising to find that upwards of 90 per cent of women surveyed agree that if future patients knew the reality of the radiation therapy experience, they would be less afraid of treatment.”

The study emphasises the need for clinicians to redouble efforts to address the concerns of cancer patients as they begin treatment. At the very least, patients should be signposted to reliable sources of information about radiation therapy. But NHS trusts can take a more proactive approach, with options including communications training for radiotherapists to informal patient meetings, where newly diagnosed patients can talk to patients who have already undergone radiation therapy.