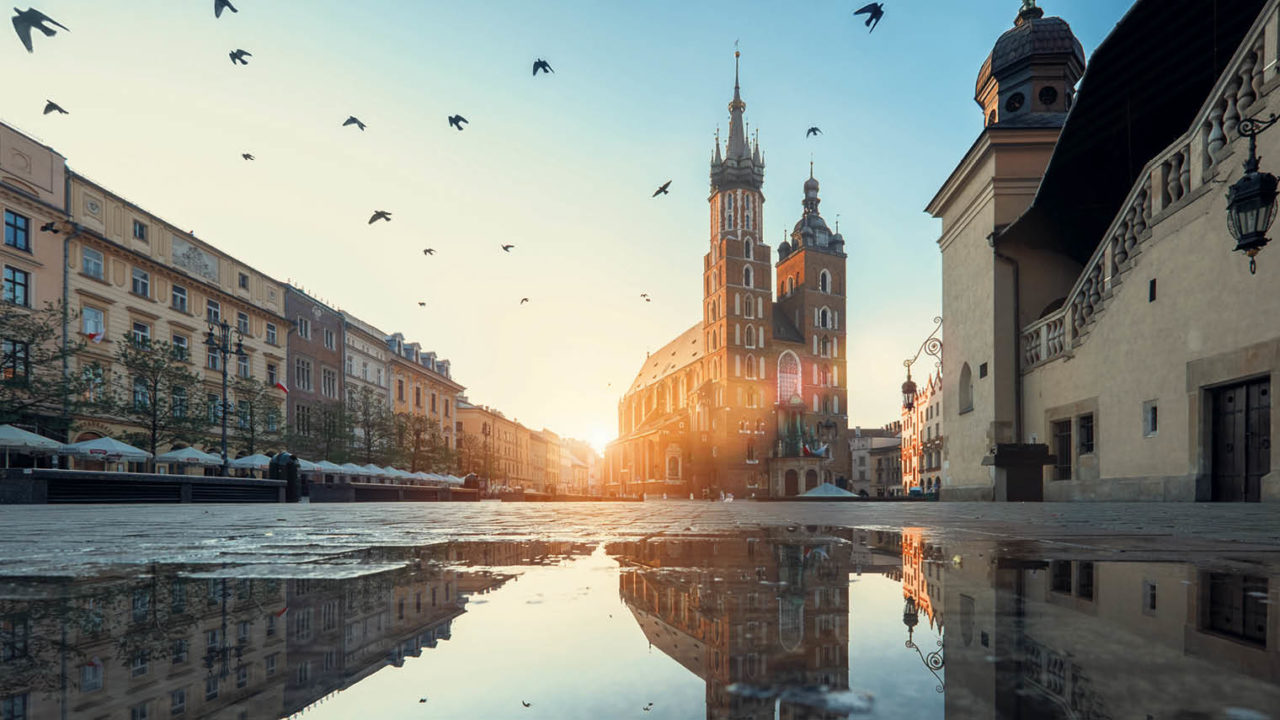 European outsourcing locations can hardly compete with India or China when it comes to lower costs or the availability of labour. But the progress of collaborative technologies is helping countries such as Poland, Romania or Bulgaria to attract British companies that want to take IT services abroad while keeping them at close touch.

Nearshoring is on the rise thanks to a number of reasons such as the affinity between British companies and their European peers and a pool of highly qualified workers. “With increasing digitalisation, we see nearshore locations being better equipped for some types of processes that require close cultural alignment with Western Europe”, says Sarah Burnett, vice president of research at the Everest Group.

In Eastern Europe, economies offer lower costs than in more developed economies, as well as plenty of engineering and IT skills, a heritage of the education priorities from old communist times. “It is much more convenient for a company to set up a development centre in a European country than in India, mostly because of cultural reasons,” says Boris Kontsevoi, president and chief executive of Intetics, an outsourcing company. “In Eastern Europe, education levels are higher than in India. They also have a strong tradition in fields such as engineering and mathematics.

It is much more convenient for a company to set up a development centre in a European country than in India, mostly because of cultural reasons

“Choosing between India our Eastern Europe for general services, skills make little difference. When it comes to more sophisticated services, like programming, skill differences do count.”

To make their markets more attractive, governments in countries such as Poland and Romania have implemented tax incentives for IT companies to set up shop in their territories, and the fact that many of them belong to the European Union provides a degree of regulatory certainty companies appreciate. “Nearshore locations in Europe are the best choice for some types of back-office work dealing with sensitive customer data within EU data protection laws,” Ms Burnett says.

“Nearshoring makes it much easier to integrate activities and also to handle confidential material,” says Richard D. Sykes, a London-based consultant. Furthermore, European workers feel more comfortable providing valuable input to the development of projects than in other parts of the world, an advantage in times of constant technological change, notes Catherine Sherwin, managing director at AlixPartners. “Workers in European locations are more likely to question and challenge what they are asked to do, which helps to deliver higher quality end-products,” she says. 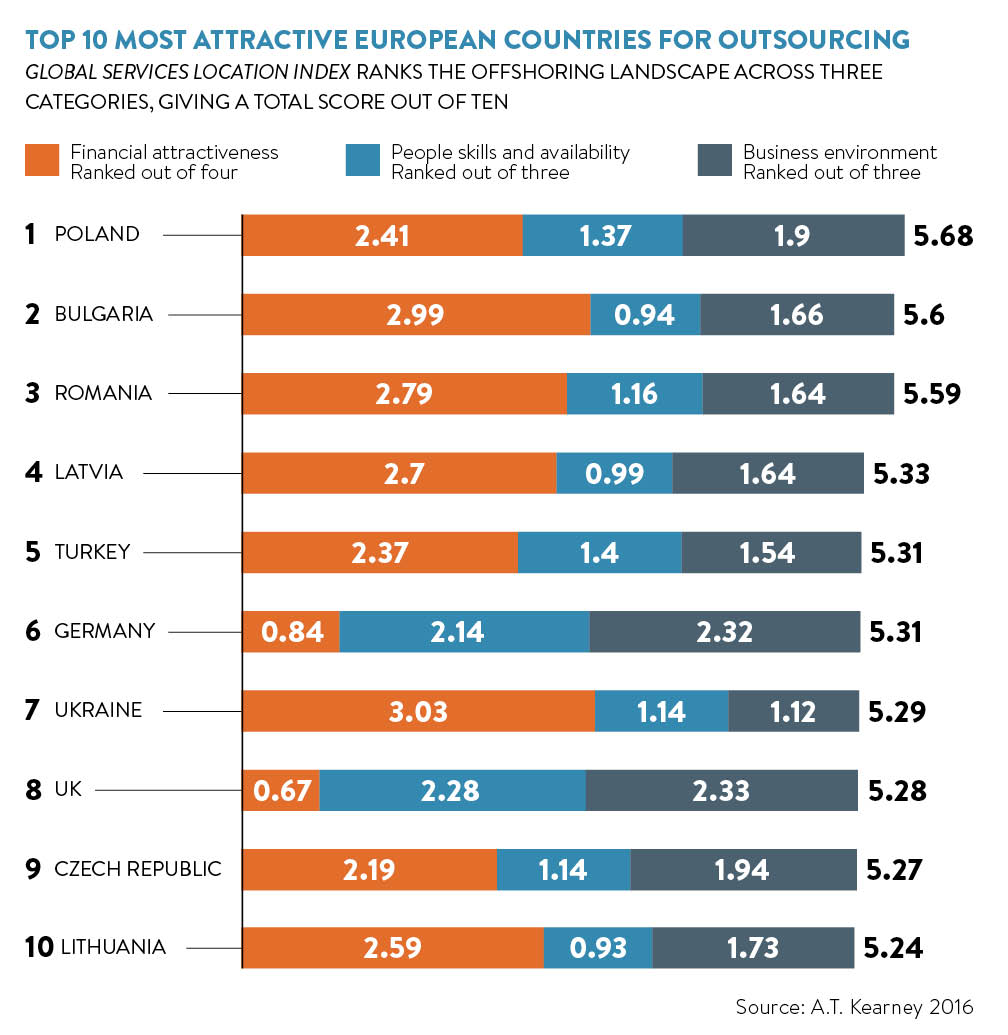 Another perceived advantage is the facility Eastern Europeans have to learn foreign languages, a useful trait for companies with supply chains and customers spread around the world. “In Poland, Bulgaria or Romania, companies can find good technical skills and linguistic capabilities in addition to English,” says Ramyani Basu, head of the Digital Transformation Practice at A.T. Kearney in the UK. Telus International, an outsourcing firm, estimates that about 98 per cent of all Bulgarians speak a foreign language and that four out of every five Romanians speak English.

But an emerging reason why nearshoring is attracting companies is that they are close at hand and occupy a similar time zone to their UK customers. As IT projects are increasingly developed and implemented in real time, the physical proximity element has gained a whole new relevance in recent years.

“Companies are moving from fixed-infrastructure datacentres to a cloud-based environment. Projects are delivered in a different way and support is provided differently as well,” says Jonathan Tate, the UK, Europe, Middle East and Africa technology consulting leader at PwC in London. “It is a much more agile way of constantly changing, improving and upgrading technology that lends itself more to nearshore rather than offshore locations.”

In the past, large technology projects were developed in the course of several months, sometimes even years, following a structured methodology where each step followed a specific time frame. Now, however, companies are increasingly employing cloud-based technologies to work in their projects. Products are quickly put to work, and they are improved and updated as customers make use of them. Closer time zones allow teams located in different countries to work at the same time and the ability to make an instant travel decision to head a workshop or check how things are going at the outsource partners constitute further advantages of nearshoring.

“The time zone makes a big difference when you are building IT solutions,” Ms Sherwin says. “In today’s world, companies use many collaboration tools such as knowledge-sharing portals and real-time screen-sharing. If you remove the time-difference issue, the IT team in the outsourcing location can become an extension of the UK team.”

The emergence of Eastern European outsourcing locations is attracting specialised companies that are expanding their offer of services in that part of the world. An example is Wipro, an outsourcing giant from India, which has maintained an operation in Romania for over a decade.

But customers who are looking for nearshoring locations should keep in mind that there are some drawbacks. Labour costs are the most important one, even though the advantage traditionally enjoyed by China and India in this particular regard has been somewhat eroded by higher wage demands in recent years. However, wages in Eastern European countries also tend to follow the EU average, which could put them in competition with closer nearshoring alternatives in more developed nations, such as Spain and, especially, the Republic of Ireland.

“Additionally, nearshore locations are typically smaller cities, in terms of population and graduate output, compared to offshore centres, and are relatively less mature,” Ms Burnett adds. “They present some constraints in terms of scalability potential, especially for some skills and senior positions.”

The development of outsourcing locations in Europe means UK firms have several options to choose from if they want to nearshore IT services. 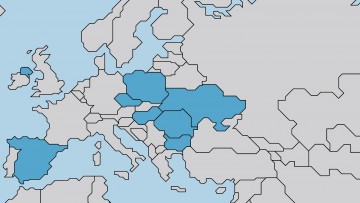 In Eastern Europe, Poland is the largest economy and one that offers some important advantages compared with its neighbours, according to Ramyani Basu, head of the Digital Transformation Practice at A.T. Kearney in the UK.

“Poland has a stabler economic situation and offers good tax incentives,” she says. “Cultural affinity with the UK also makes it an interesting outsourcing destination. It has more than 400 outsourcing centres, and enjoys substantial foreign capital investment around research and development and business process outsourcing.”

But the Poles face determined competition from some emerging challengers in the region. “Bulgaria has become a hot location specifically for high level activities such as computer-aided design and manufacturing,” says Ms Basu. Bulgaria’s education system produces a wealth of engineering and technical skills, which makes it a particularly suitable place to look for very specialised technology and programming skills, she says.

Another emerging nearshoring market is Romania, where labour costs are lower than in other countries in the region, without compromising the quality of the workforce. “Romania is a rising star in the market,” Ms Basu says. “There is huge government support for outsourcing services, including significant tax incentives for IT professionals.”

The Czech Republic and Hungary are other options seen as low risk in the region. Outside the European Union, Ukraine offers a large army of IT specialists and has improved business conditions, although the country’s political and economic instability constitute a hurdle to the development of the market.

Companies that do not mind to spend more have options that are even closer to the UK, both culturally and geographically, and present a lower perception of risk. “Spain is trying to make the most of the financial markets situation to position itself as a low-cost nearshoring geography,” says Catherine Sherwin, managing director at AlixPartners. For its part, the Republic of Ireland has plenty of IT infrastructure and highly qualified workers, although costs are an issue there.

Top image: Poland is the most attractive market for outsourcing in Europe, according to A.T. Kearney