Google Glass is going to transform the world, we were told five years ago. The $1,500 (£1,160) voice-activated, hands-free smart spectacles would be as ubiquitous and useful as smartphones.

Soon people realised that the reality of Google Glass fell short of the hype. In addition, it fulfilled no use-case, was pricey, invaded privacy and was downright creepy. No one batted an eyelid when Google stopped selling the purportedly revolutionary tech in 2015.

The bombastic entrance and high-profile failure of Google Glass is important, however, as it evolved the concept of wearables and simultaneously elevated the barrier many business leaders struggle to overcome with new technologies.

Recent research shows that C-suite executives are interested in so-called extended reality (XR) technologies, namely virtual, augmented and mixed realities. Indeed, analysts at Gartner predict that by 2019 some 20 per cent of large-enterprise businesses will have adopted XR technologies.

Furthermore, managing director of Accenture Technology, Maynard Williams, reveals that according to a 2018 study by his company: “Some 27 per cent of executives believe it is very important for their organisations to be a pioneer in XR solutions.”

Business leaders can’t afford to punt on potential, though; they seek fully baked solutions that will make a significant improvement today. Alas, the Google Glass misstep is one of a growing number of overhyped tech products that have made corporate decision-makers, among others, warier about XR’s lofty promises, argues Naji El-Arifi, head of innovation at consultants Wunderman Commerce.

“Overall, the community is now much more cautious of the technology due to Google Glass’s failures in approach. I feel most companies learnt from that and now take things much more slowly,” says Mr El-Arifi, while stressing the potency of mature XR. “Understanding the real and digital worlds, and bringing them together seamlessly so they can share the common reality, will be the next big thing in B2B [business to business] and B2C [business to consumer]. It will also take the disruptor crown away from mobile.” 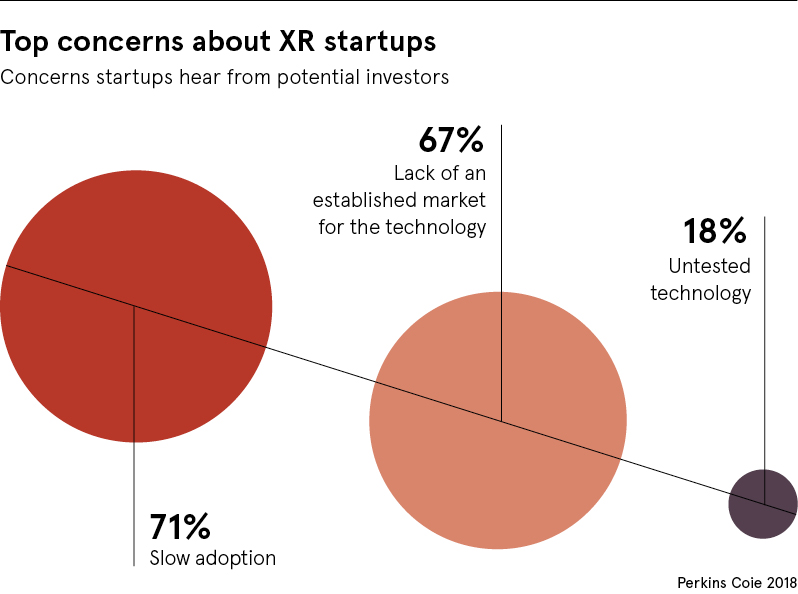 XR, like Google Glass, can be let down by hyped-up marketing

Is the gulf between expectation and reality widening, and is that harming the long-term chance of XR technologies triumphing?

Karl Maddix, co-founder and chief executive of VR software development company Masters of Pie, believes there is often still too much untruthful marketing in this space. “It is easy to make people excited with scenarios of XR revolutionising our lives in the near future, supported by captivating mock-ups and videos of perfect virtual environments, but this is often lacking substance; all flash and no Gordon,” he says.

“The hype they generate does help when it comes to attracting investors and making potential end-users excited enough to initiate a conversation. But that conversation needs to be grounded in reality, with people who are on the front line and are interested in building solutions, and not just showing how visionary they are.”

Jeremy Dalton, head of VR/AR at PwC, contests that the ballyhoo around XR is “partly the result of a lack of understanding of the technology”. He continues: “Ultimately, this stems from a minimal experience that is then used to build a view on all areas of the technology, leading to many misconceptions about the value of XR.

“It’s the kind of technology that has to be tried before being understood; in many cases we see, expectations are exceeded as it’s difficult to describe in words what is ultimately a very visual and immersive experience.”

Richard Das, senior manager at Deloitte Digital, agrees. “As the saying goes, if you judge a fish by its ability to climb a tree, you’ll be disappointed,” he says. “Because we bring many of our preconceptions to the table of what tech is, it’s hard to measure expectations of what it could be.”

Dr Karen Correia da Silva, senior social scientist at consumer behaviour specialists Canvas8, points out that Google Glass is succeeding in the B2B space. “An adapted version is thriving in US factories,” she says. “At DHL, employees used Glass to streamline the package-picking process, improving efficiency by 15 per cent. Google tried jumping all the way to the customer applications when the product and tech perhaps weren’t quite there. But when it shifted its focus to a place that could get value out of the technology as it was at the time, it succeeded.”

The dearth of XR use-cases is a worry, though it is expected to improve before long. “Limited software or applications will always restrict demand, or kill the hype, for a technically sound product,” says Mark Bates, general manager of Hire Intelligence, a B2B rental organisation that has seen a 394 per cent increase in XR hardware inquires in the last two years.

“The power and potential of XR is strong, but the loop must be closed between industry needs, hardware capability and application development. Once applications are relevant, senior personnel in industry will trial the tech and then word of mouth about the quality of experience will drive greater adoption.”

For Rebecca Gregory-Clarke, head of immersive technology at Digital Catapult, it is clear that business leaders have to look past the hype and focus on maturing XR. She concludes: “For those looking to take full advantage of immersive technology, it’s important to get involved now to be well positioned to take maximum advantage once the technology has fully evolved. We’re currently in the ‘black-and-white TV’ era of XR, a nascent version of a now-ubiquitous technology.”