Lack of R&D funding is holding UK innovation back

If proof were needed that UK engineering businesses are short of research funding (particularly research and development), the demise of the Bloodhound SSC project should serve as a warning.

Plans to create a car that could race at more than 1,000mph were recently scuppered after the company behind the project went into administration. Despite the car being close to completion, it ran into a brick wall after £25 million, needed for the final stages of R&D, failed to materialise.

Until now, the UK has been able to benefit from the Horizon 2020 programme, which is the biggest ever EU research and innovation programme

“Despite overwhelming public support, and engagement with a wide range of potential and credible investors, it has not been possible to secure a purchaser for the business and assets,” says joint administrator Andrew Sheridan. This is despite the fact that the £25 million over which the project foundered is insignificant compared with the cost of, say, finishing last in the a F1 season.

A lack of research funding is holding UK innovation back

Research shows that the project is not alone in being starved of research funding. Earlier this year, a report from the Office for National Statistics revealed that the UK spent just 1.67 per cent of GDP on R&D in 2016, compared with an EU average of just over 2 per cent. The UK, in fact, is 22nd on the R&D funding list.

The shortage of research funding in the engineering sector is particularly marked when it comes to the development part of the cycle. A recent report for the Royal Academy of Engineering (RAENG) concluded that this is holding back the potential of an otherwise strong system of innovation in the UK.

“The UK undoubtedly has many attributes that already attract engineering businesses to locate their high-quality, early-stage R&D activities here, not least our world-class academic research base and its excellent collaboration with industry,” says RAENG president Professor Dame Ann Dowling.

“Unfortunately, this is undermined by gaps in the R&D and innovation system at a highly risky and expensive time in the development cycle. Plugging these gaps would help innovative engineering businesses, boost productivity, and create better jobs and social outcomes in the UK.”

There are plans, under the government’s Industrial Strategy, to increase research funding to 2.4 per cent of GDP by 2027. The government says it will start with an extra investment of £2.3 billion in 2021-22, raising total public investment in R&D to £12.5 billion that year.

“Domestically, one of the key things is that we’re waiting for the UK Research and Innovation roadmap to say how the UK is going to reach that 2.4 per cent target,” says Lorraine During, business environment policy adviser for EEF, formerly the Engineering Employers’ Federation.

Ms During cites initiatives including the government’s Catapult Network, which was recently awarded an extra £780 million in funding to help deliver the Grand Challenges set out in the Industrial Strategy, as extremely encouraging.

A problem for engineering businesses is that support for R&D is available in a somewhat patchy way, with some UK regions and business sectors eligible for more than others. For example, a government grant scheme for R&D in agritech is restricted to Cornwall and the Isles of Scilly, while innovation support is offered to companies developing transport equipment in the East Midlands. 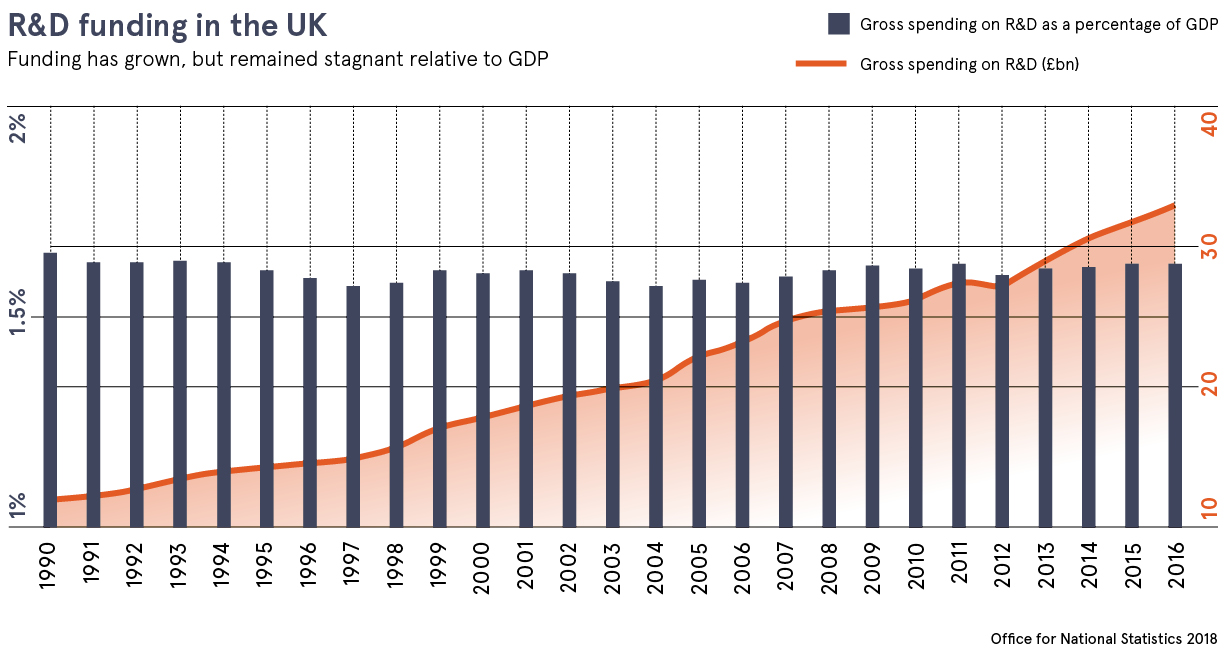 Sonali Parekh, head of policy at the Federation of Small Businesses, says she would like to see some of these schemes expanded.

“The Jürgen Mayer Review led to a government funding pilot in the North West to accelerate digital technologies,” she says. “It’s a step in the right direction and we would like to see more initiatives like that adopted in more sectors.”

In fact, says Ms Parekh, many small businesses are unaware of the help available.“Forty six per cent of small business innovators who don’t use government support didn’t know it was available in the first place,” she says.

“We’d like to see increasing awareness of R&D tax credits in particular, where there is a small firm that’s not actually got a new-to-market product, but is depending on the transfer of existing ideas to improve its productivity.”

R&D tax credits come in several forms, but essentially consist of either a payment or a reduction in corporation tax.

“The scheme is relatively well known now, so awareness really shouldn’t be an issue. However, roughly half of our new clients every year come from businesses that have never claimed under the scheme,” says Steven Garrod, managing director at tax credit specialist MPA Group.

“There are some simple and understandable reasons for this. Something we regularly hear from new clients is that they never considered their work as ‘R&D’ or ‘innovation’; they’re simply trying to improve a product or meet their customer’s need.”

What impact will Brexit have on R&D funding?

Alongside tax credits comes the Patent Box scheme which, says Mr Garrod, is equally underused. It can reduce corporation tax on a qualifying product line to 10 per cent.

“It is designed to work alongside R&D tax credits to further reward UK’s innovative businesses. If a company is already claiming under that scheme it may well have a claim under this scheme, but only if they have a patent,” Mr Garrod explains. “It’s a major opportunity for business, but HMRC statistics show that 97 per cent of companies engaging in R&D are missing out on it.”

So UK research funding is set to increase. But as for European Union funding, who knows? Until now, the UK has been able to benefit from the Horizon 2020 programme, which is the biggest ever EU research and innovation programme, making nearly €80 billion of funding available between 2014 and 2020.

While the government has agreed to continue payments that have already been approved up to the end of 2020, it’s not clear how it will be involved after that. “Horizon 2020 in the UK has always been a success and it’s great the government has agreed to fund the bits that have already been assigned, but in terms of the future, there’s some uncertainty,” says Ms During.