Between 2012 and 2016, the global mining industry found itself in a battle with market economics. Falling commodity prices, slowing demand from China and a resulting market oversupply forced miners to cut costs, rebuild balance sheets and spend 2017 refocusing business strategy.

But this financial rationalisation triggered a new technology cycle as companies sought to improve efficiency and make savings through new innovations.

“We have seen mining companies and their employees optimise mills, manage flowsheets, grade profiles and analyse exploration results long before these methods were labelled ‘big data’,” says Evy Hambro, manager of the BlackRock World Mining Trust. “However, the processing power available today should enable this to be done more efficiently than ever before.”

With economic conditions looking more favourable for miners, there is renewed appetite for growth, encouraging mining groups to be far more ambitious with their technological aspirations in the years ahead. 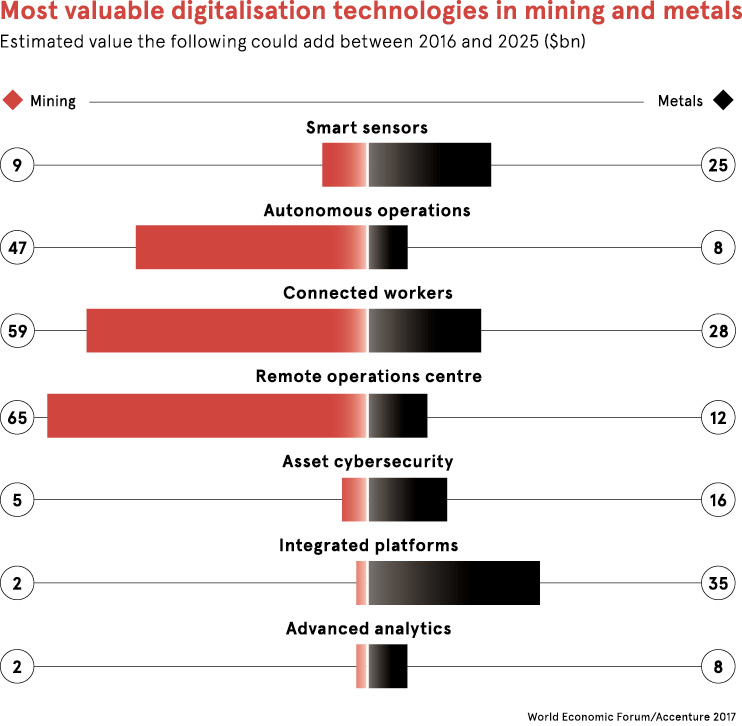 “Different sectors in the mining industry have faced cost pressures in recent years,” explains Guy Turner, director of management consulting group Partners in Performance. “That forced a bunch of tactical cost-reductions. As the profits come back, businesses are saying ‘how do we enable the people that we have with technology?’”

Mr Turner stresses that technological adoption varies by region, but notes the largest mining companies have made significant capital investments in robotics, autonomous vehicles, drones for stock pile measurement and embraced a host of wearable technologies to enhance safety.

“Corporate strategy has reacted to an economic cycle in mining that originally said reduce your costs quickly. Now we are in happier times, we can grow and build businesses, and this is being done through technology,” he says. “Innovation is happening in every dimension, whether the focus is on safety, quality measurement, automation, use of predictive data or adoption of digital solutions.”

As mining companies become more ambitious with their capital investments, the difficulty for management teams is prioritising those technologies with the potential for the biggest impact.

“Get a good understanding of your company’s starting point, relative not only to other miners, but also to digitally literate companies in other sectors,” says Konrad von Szczepanski, partner at Boston Consulting Group. “Then it’s a question of experimenting, piloting, learning and adapting in developing solutions.”

He says involving the workforce in any new technological developments through both on-the-job and classroom-based training can have a radical impact on the successful implementation of new strategies. Also additional benefits can be gleamed by partnering with new companies in the technology sector, such as data analytics startups.

Some of the largest players have been making headlines with substantial investments to improve operations in remote locations. Mining groups BHP and Rio Tinto, for example, have spent considerable sums on embracing autonomous vehicles.

Last July, Mining magazine reported that BHP was embarking on a substantial training programme to upskill its workforce to enable them to handle a rapidly expanding fleet of autonomous vehicles. Rio Tinto, meanwhile, announced plans to retrofit some of its Caterpillar trucks for automated operations from mid-2018 as part of a $5-billion productivity drive.

The company says automation elsewhere is already improving productivity. “Rapid advances in technology are continuing to revolutionise the way large-scale mining is undertaken across the globe,” according to Rio Tinto’s iron ore chief executive Chris Salisbury. “The expansion of our autonomous fleet via retrofitting helps to improve safety and unlocks significant productivity gains.”

Mr Salisbury says the company will be considering making future additions to its autonomous fleet as part of a commitment to deliver an additional $5 billion of free cash flow by 2021.

Both BHP and Rio Tinto have earmarked operations in the Pilbara region of Western Australia as ideal sites for expanding its autonomous operations, due to the difficulties in recruiting staff in what is a relatively remote location.

“At the mines, automation and remote operation are important tools for mining companies to increase productivity, reduce costs and improve safety in the workplace, which is of paramount importance to all stakeholders,” says BlackRock’s Mr Hambro.

“If these technological enhancements are integrated alongside upskilling of experienced employees, it could have a compounding effect on the entire asset base. Lower costs, improved safety records and reduced environmental impact might be able to unlock further gains, which in turn would allow formerly uneconomic deposits to be developed.”

While much of the focus of digital innovation has been focused on the technology or the process, the human element of staff recruitment and retention remains vital to the successful implementation of new processes within mining companies. Industry analysts say that competition for top talent is as severe as ever.

“Even large, global miners struggle to attract top-notch data scientists,” says Mr von Szczepanski. “Miners are competing not with other miners for employees, who by education have already decided they want to work in the mining industry, but with the likes of GE, Google and Facebook.”

While the landscape for staff recruitment may be fierce, it is clear there are bold ambitions for yet more additions to corporate technology programmes at the world’s largest mining companies. If they can find or train the right staff to handle modern technologies, the outlook for the digital mines of the future looks very bright indeed.