Second wave of cloud is rolling in

The problem with technology, at least for a lot of non-techies, is that just as you’re getting used to it, things change. The feeling is a bit like spotting a nice comfortable chair and then having it kicked away just as you’re half way through the process of sitting down.

So it is with the cloud. People are still writing guides about how you define it, such is its youth, but already we’re being moved on to version two. This time it’s global tech behemoth Cisco that’s the driving force behind the new terminology.

In a blog posted late last summer, Cisco senior vice president Nick Earl claimed to have identified a “second wave” of cloud adoption, with four in ten organisations already having transferred to either public or private cloud services.

Up until that point, he says, the primary drivers behind the cloud were speed and cost – the former fast, the latter low. But in the second wave, businesses are moving to the technology for new reasons, namely to achieve “transformative and measurable” business change.

Just over half of businesses questioned in an IDC survey for Cisco expect the cloud to allow them to allocate IT budgets more effectively, while about the same number (53 per cent) claimed the cloud will help them increase company revenue, in other words generate sales or increase their value.

It’s a point reinforced by other Cisco staffers, such as Joachim Mason, head of datacentre at Cisco UK and Ireland. He points to the global titans of business that have created multi-billion-dollar valuations thanks to cloud tech. 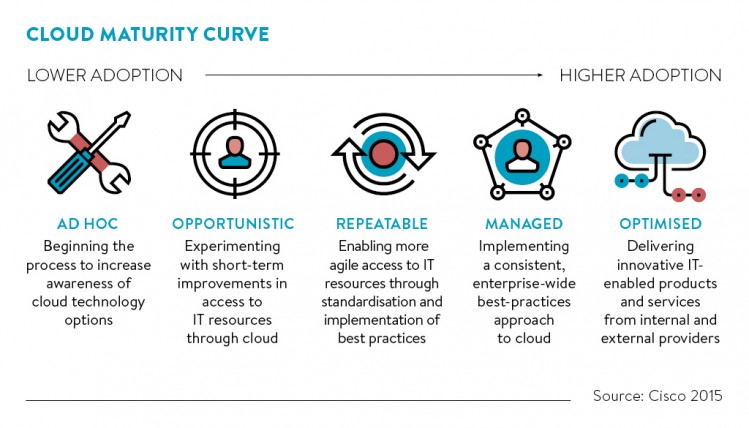 “Long-standing organisations within established industries are being disrupted by businesses that have adopted cloud technology as their weapon of mass disruption,” he says. “Cloud traffic is expected to quadruple and 83 per cent of total datacentre traffic set to come from the cloud by 2019, according to the Cisco Global Cloud Index, so it’s clear cloud technology is moving well beyond a regional trend to firmly establish itself as global mainstream solution.

“For example, Uber has used cloud capabilities to transform the taxi industry, Airbnb the hotel industry and Netflix has turned the home entertainment market on its head, while also bankrupting a high street brand. Ultimately, no industry is immune – finance, education, healthcare and the technology industry itself are all prime candidates for this type of disruption.”

Having a cloud strategy

Second-wave adopters of the cloud expect it to help drive change, making them leaner, faster, more innovative and ultimately more disruptive. But Cisco says the value derived by any given business is proportional to the maturity of its cloud strategy.

Adoption is a spectrum, says Mr Earl, ranging from the ad hoc pick-up of solutions as and when problems happen, to centralised, systematic cloud platforms that connect people throughout the business with cutting-edge digital services from internal and external sources.

According to IDC and Cisco, there are five stages moving through the levels of opportunistic experimentation with short-term improvements, then repeatable IT resources, provided by standardised IT systems, and self-service portals accessing cloud services.

The fourth stage is managed cloud defined as implementing a consistent enterprise-wide best practice approach to the cloud, with service delivery across an integrated set of resources.

Top organisations fall into the “optimised” bracket and drive company-wide innovation through transparent access to IT capabilities based on their value to the business.

As you move up the adoption curve, according to the research, key performance metrics to do with sales, employees and IT budgets all tick up significantly. Those in the top-tier category, occupied by of a zen-like pedigree, enjoy an average 4 per cent increase in revenue, for example.

They provide IT services 99 per cent faster, increase their ability to meet service level agreements by 72 per cent and they enjoy a whopping 77 per cent reduction in the cost of IT. However, in a cloud to the silver lining, Cisco says only 1 per cent of the companies it questioned had created these gilt-edged cloud strategies.

Michael Liebow, global managing director of Accenture Cloud Platform, agrees that full-scale adoption is in the future for most businesses. He expects significantly more adoption in 2016, along with a general maturing of cloud strategies.

“While 2016 will bring some challenges as companies adopt cloud solutions, we are only beginning to scratch the surface,” he says. “If given the proper education, the right environment, some diligence and smart investments, companies are poised to reap the big benefits of cloud.

“Adoption of cloud brings, speed, agility and scale, which ultimately improves user experience, supercharges the ability to get to customers faster, helps businesses innovate more rapidly and opens their doors to more significant transformative change in the not-too-distant future.

“Enterprise adoption is expected to accelerate this year. It’s the end of the beginning of enterprise cloud and we see significant maturity in the way an enterprise will use the cloud. We see the cloud being firmly established as a central feature of a comprehensive digital strategy across all parts of an organisation, all devices and all applications.”

The growth of the cloud is being accelerated by its perfect relationship with other emerging digital technologies, such as the internet of things (IoT), which the cloud helps understand.

“The internet of things is soon to arrive in full force. Some businesses have already started to realise the importance of thinking in terms of networks, ecosystems and data,” says Nestor Zwyhun, who leads datacentre operations for GT Nexus worldwide.

“Cloud technology is required to harness the power of the IoT’s granular big data and make sense of it. By being centrally located, always available, massively scalable and hardware-independent, the cloud is fantastically positioned to turn IoT data into insight and help businesses operate as networks.”

Yet roadblocks remain. Mr Liebow says one of the main challenges to greater take-up of cloud services is company culture, particularly within large organisations with complex and entrenched legacy systems. But he says even small firms should not get complacent.

Another potential sticking point, according to David Gibson, vice president of strategy and market development at Varonis, is security. In the race to adopt evermore sophisticated and all-encompassing technology, some companies will inevitably put vital security work on the back burner.

“We’ve seen that organisations have had a difficult time making sure the data they store on-premises is adequately secured. Sensitive data is kept in unexpected places and accessible by too many employees, and employers aren’t watching how their employees use data, so it’s very difficult to spot and recover from a breach,” he says.

“If organisations take the same lax approach in the cloud, they are one shared link or weak password away from total disaster. Fortunately, organisations can protect data they store on-premises and in the cloud, and many have adopted processes and technologies to do so. The desire to take advantage of the cloud may prompt organisations to focus on some of the data security efforts they’ve been neglecting for too long.”

Keeping these concerns in mind, companies are being advised to think like second wavers and move to the new plane of thinking. Mr Earl at Cisco recommends considering some important questions such as how will moving workload to the cloud affect cost, security, scalability and data governance?

He says strategies should answer questions concerning when to use public cloud, or dedicated or private resources, which parts of the business should take priority and how to make changes without causing unwelcome upheaval.

Businesses must answer these questions because a cloud-enabled organisation is leaner, more agile, faster and generally more powerful than one lacking all the advantages cloud adoption brings.