From the biggest enterprises to the smallest startups, companies are transforming the way they work by turning to cloud computing for their IT needs.

The benefits are huge as there’s no need for vast capital expenditure on energy-hungry servers. Staff can work on programs from anywhere and seamlessly collaborate on shared files. Data is stored remotely, so won’t be lost if the system goes down, and cloud computing offers great flexibility for businesses that are growing fast and need fluctuating bandwidth.

But finding the right provider of cloud computing services can be far from straightforward.

Take-up of cloud computing services has been rapid, with the market growing by more than 20 per cent a year. In 2017, the global public cloud market will exceed $146 billion, up from $87 billion in 2015, according to Forrester Research.

This fast-expanding market is dominated by Amazon Web Services (AWS) followed by Microsoft Cloud. Google and IBM are the next biggest players and, together with the two leaders, they make up the mega-providers that control over half the market. Following behind is a league of significant players such as Rackspace, Alibaba, Oracle and Salesforce.

There is also a multiplicity of mid-sized and smaller companies offering to host services in the cloud and managing the services offered by the biggest players. Even so, it is the mega-providers, especially AWS, that are growing fastest as they attract global corporations.

These corporations often have large IT departments with plenty of in-house expertise to handle the deployment of cloud services. Smaller businesses, on the other hand, may need advice to help them find their way around the services and will require support in the event of problems and bugs. 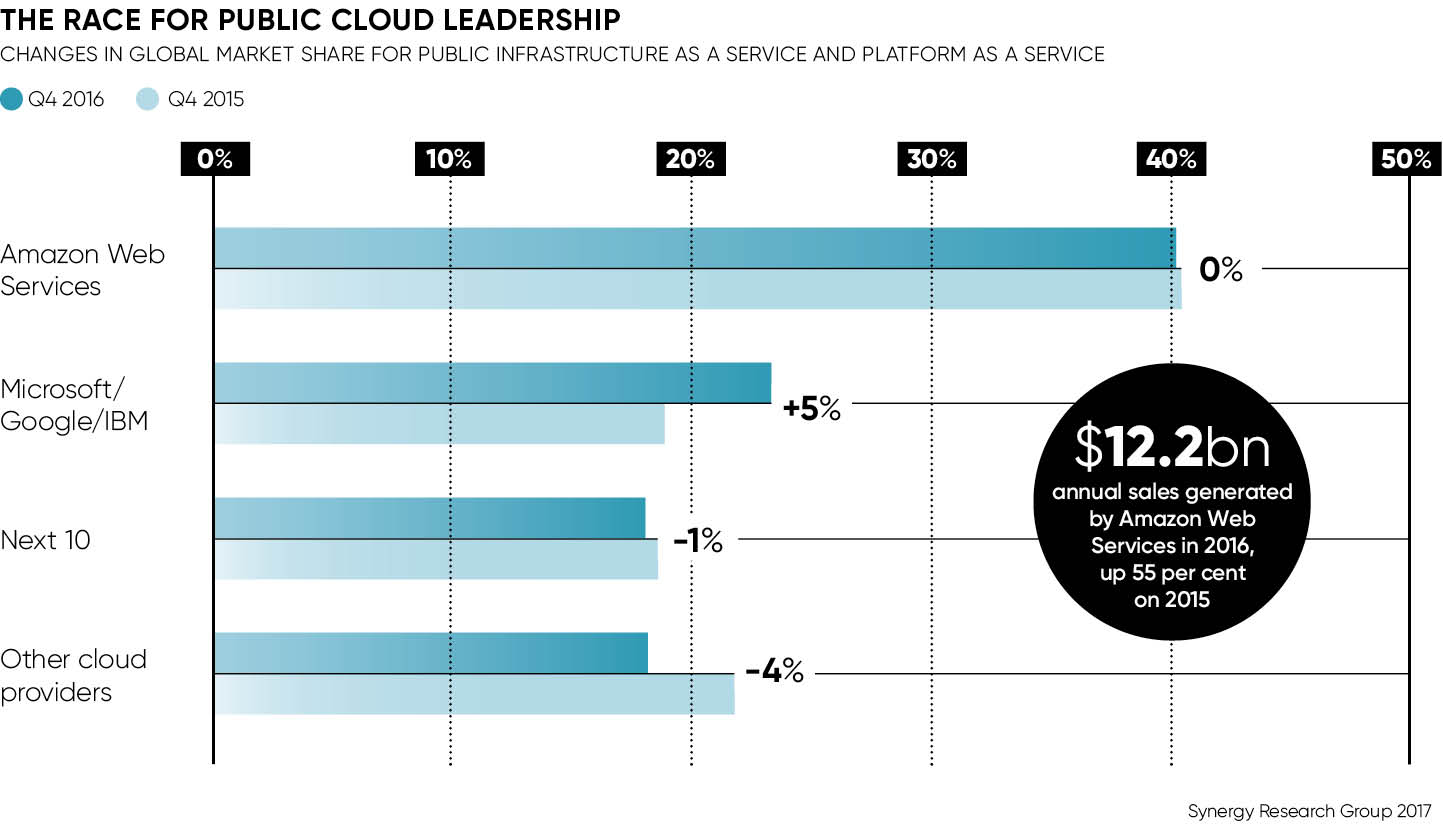 Some argue that businesses go to the mega-providers because of their strong reputation for helping companies migrate seamlessly to the cloud. Maarten van Montfoort, vice president for North Europe at IT services provider Comparex, says: “One of the reasons many businesses opt for a mega-cloud provider is the view that they represent a ‘safe pair of hands’.

“Already many chief information officers struggle to identify and implement the cloud services most suitable for their business. Mega-cloud providers have become the default choice because of the perception of the greater ease of migrating to a large vendor.”

However, smaller players are sensing an opportunity to offer a custom service for companies without strong in-house expertise. Jack Bedell-Pearce, managing director of UK cloud and data centre provider 4D, says the market is changing rapidly and the biggest players Amazon and Microsoft are pulling away from the pack. “The other players have given up fighting the scale war with Amazon,” he says. Cisco pulled out of its public cloud offering late last year.

But he claims some companies have had a difficult experience with the mega-providers. “Bosses say that is where we want to be and they task their chief information officers to migrate everything across,” he says. However, there can be problems as the large-scale providers may not provide the right kind of support for companies.

Mr Bedell-Pearce says the mega-providers assume big companies will have in-house IT experts who can provide support if something goes wrong. “It is not like a smaller service provider where you can pick up the phone and talk to a techie. The reason the mega-providers’ prices are so low is because that is all they are offering, the commodity of the cloud platform,” he says.

One effect of the increasing size of the biggest players has been the growth of managed cloud services. A big trend has been for organisations to use a variety of cloud providers. This opens the way for specialists who help businesses manage the multi-cloud system. Darren Norfolk, managing director of cloud management service Rackspace UK, quotes a report from RightScale which shows that applications are running on an average of eight different cloud services.

“There’s lots of complexity if you then go and try to hire different skillsets for all of those different types of clouds, and that’s what we are seeing with customers we are working with,” says Mr Norfolk.

He explains that in many companies, the marketing and development teams tend to be highly innovative and push to get products to market quicker than a centralised IT team. These teams may hire their own cloud provider.

“There are many different dynamics and that is where this whole multi-cloud aspect comes to fruition, and we see an opportunity where there are organisations that aren’t choosing one size fits all,” he says. Where there are multiple cloud providers, it makes sense to work with a consultancy to oversee the management of the clouds.

File-hosting service Dropbox is making a play for a share of the cloud market. Philip Lacor, Dropbox vice president for Europe, the Middle East and Africa, says the most important thing is for businesses to define their aims for cloud computing before they take a decision about which service to use.

Important considerations include finding a cloud system that is agnostic about operating systems, whether Mac or Windows, while security should be top of the agenda. “They should also select cloud providers that adhere to strict security principles and guidelines. The most important thing to consider is the usability of cloud services. If technology is clunky, employees will use their own consumer services, which could create security issues,” he says.

Some businesses will need a high degree of support so will prefer to use a smaller player. But as Mr van Montfoort from Comparex says: “Ultimately, every cloud journey is different and the needs of every business are different, which means it is not the size of the vendor which should be important, but whether the contract a chief information officer signs up to actually fits the needs of the business.”