War clouds are gathering. The big three hyper-scale public cloud providers – Amazon Web Services (AWS), Microsoft Azure and Google Cloud Platform (GCP) – are preparing to do battle, with one another and challenger organisations, for territory in the second stage of the technology’s maturity.

The first shots have already been fired by key personnel in the financial services industry. Is reputation dead? In September, a remarkable statistic, presented by YellowDog, a Bristol-based software company, revealed 81 per cent of information technology business decision-makers at financial services institutions in the UK and America describe their cloud procurement preferences as “agnostic”. In other words, more than four fifths have not set up their systems to suit any single cloud provider and are open to newcomers.

Other eye-opening findings, in Cloud Busting: Dispelling the Myths Surrounding the Future of Cloud in Financial Services, a report that draws data from 200 respondents in the UK and United States, include that 94 per cent of those interviewed believe multi-cloud will save their respective organisations huge sums of money and the number of companies using four or more providers will double in the next five years.

YellowDog’s study highlights the shift in dynamics in the cloud market, which it values at $200 billion (£160 billion). “It’s interesting to see financial services organisations develop their cloud strategies as they discover what works best for them,” says Gareth Williams, chief executive of YellowDog.

“AWS had a huge head start on the competition and many organisations felt they had become the mandatory choice as cloud provider. With GCP and Azure plus some challenger clouds investing heavily to catch up, it’s not a surprise large financial services organisations are looking at multiple factors when designing their cloud strategy. The outcome is more commonly now to use more than one cloud provider.”

Cloud is a maturing market

Emma Roscow, intelligent cloud infrastructure lead for Accenture in the UK and Ireland, agrees. “Businesses have become savvier in their cloud operations,” she says. “Cost is still important, but quality, agility and resilience in a crisis are equally valuable.

“Now that cloud is widely accepted as more secure, relying on one cloud provider alone seems risky. The question will now be who else to involve. With the playing field effectively levelled, a fierce competition is growing.”

This chimes with John Starling, UK cloud engineering consulting lead at Deloitte, who is unsurprised that financial services organisations are agnostic about their cloud procurement preferences. He says: “There is often concern around vendor lock-in – being tied to just one cloud provider – which can be both limiting and costly. 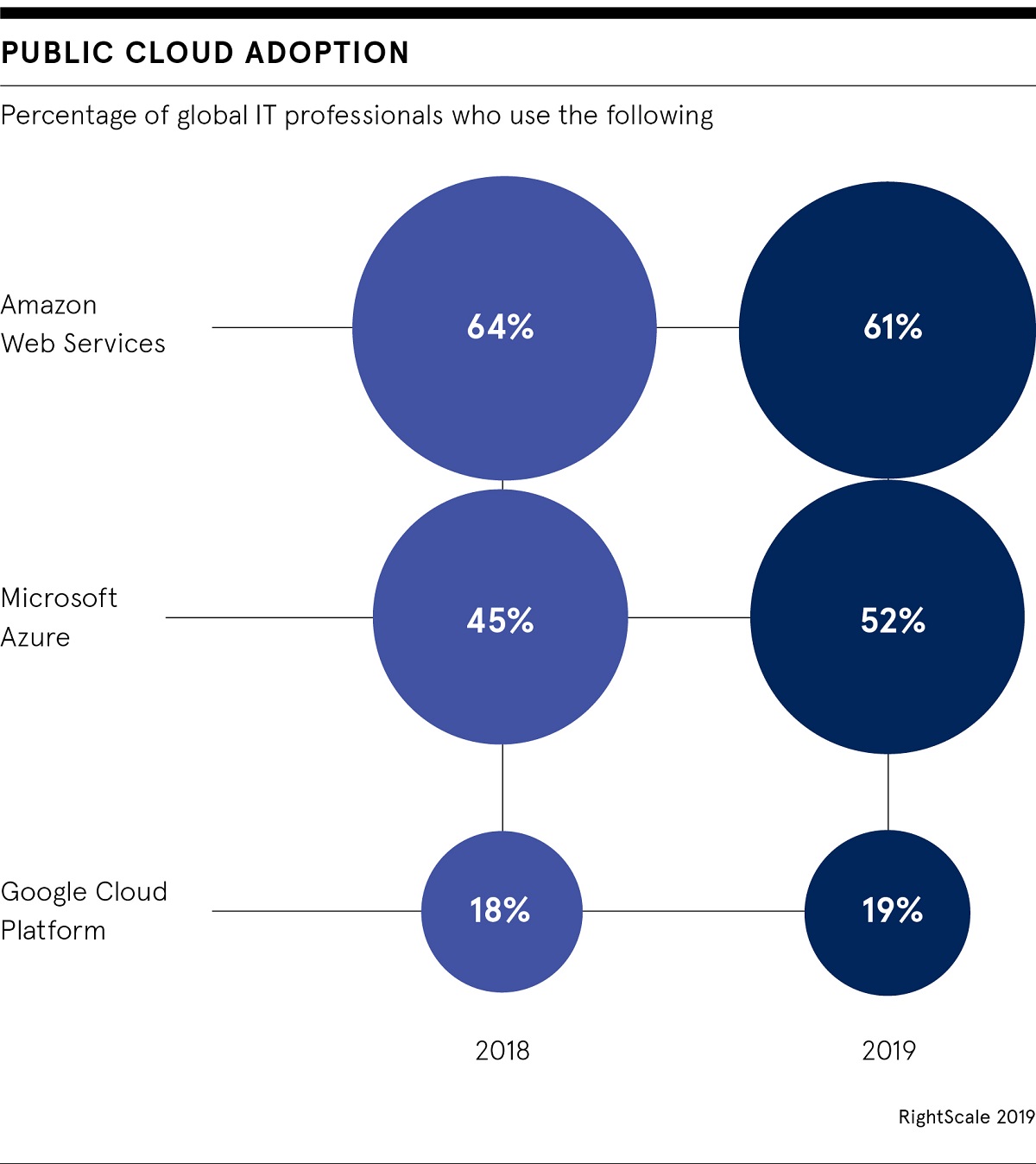 “Over the last few years organisations have moved away from an overly simplistic cloud-first approach, meaning they are not simply moving to the cloud regardless of the use-case, to a more thoughtful cloud-right strategy, where they are being more considered about whether it makes sense for that process.

“At the heart of this is the realisation that moving to the cloud can be much harder than first expected, as well as increasing impatience for cloud to return real business value to the organisation. Aligning an organisation’s cloud strategy to a business imperative makes much more sense.”

Microsoft Azure’s business lead Michael Wignall acknowledges the progression along the market’s “maturity curve” and explains: “organisations big and small tend to start with cloud migration. They take existing applications and projects that are traditionally run on-premises and move them to the cloud because of cost efficiency, scalability, security, reliability and flexibility.

“They quickly look to gain further competitive advantage, though, by innovating on the cloud and generally that means modernising existing applications or building new applications.”

In the financial services industry, much of the decision-making revolves around risk, so it is no wonder organisations are increasingly lured by performance over brand. “As more services move over to the cloud the decision should be based on minimising risk, providing longer-term flexibility and value,” says Mr Williams of YellowDog.

His organisation’s research finds that “the cloud provider itself is the least important aspect for decision-makers when selecting their cloud providers” with an insight and data-led approach preferred, and return on investment also a crucial factor.

According to the 2019 European Insight Intelligent Technology Index, published early this year, UK businesses are on average frittering away £8.8 million annually on unused cloud services, equivalent to £24,000 a day.

“An enterprise’s priority is to ensure they receive the maximum return on their cloud investment,” says Ozioma Uzoegwu, lead cloud architect at Insight, a software solutions company. “This means understanding where their workloads need to be placed, whether in public, private or hybrid cloud, and choosing providers to match.”

Top cloud providers are realising they need to set themselves apart from rivals through better serving customers. However, as Mr Williams says: “This focus on performance means the barrier to entry is high; new entrants need to be extremely well funded.”

Ms Roscow at Accenture concurs. “The good news for the big players is that this shift in the dynamics may work in their favour. Moving further up the value chain by offering services on top of their infrastructure is a natural next step. Several key providers are already creating data analytics tools and plug-in industry solutions, which will attract organisations looking for long-term value,” she says.

“It will always boil back down to the business problem. The provider that can best answer this, and in doing so ensure their customer’s success, will win the next leg of the cloud race.”

Jostling for position, Adrian Poole, head of financial services at GCP in the UK and Ireland, claims “the pace of innovation we bring to clients is second to none”. He says that, while return on investment isn’t where it should be in the cloud market and needs to change, his teams are always focused on trying to solve customers’ problems.

“It’s not a case of saying to a client, ‘We want to move your workloads to the cloud’. They need to understand why we would do that, how it solves their biggest problem, what the benefits are,” says Mr Poole. “We’re moving into an age of assistance. As cloud providers, we have to anticipate what our clients’ needs are. Using artificial intelligence we can put forward appropriate propositions.”

Microsoft’s Mr Wignall is similarly bullish. “At Azure we talk about being inventive with purpose. We ground ourselves in Microsoft’s mission statement, which is to empower people and organisations around the planet to achieve more. Our success is our customers’ success,” he says.

With the International Data Corporation predicting 90 per cent of large organisations will adopt hybrid and multi-cloud strategies by 2020, the battle lines have been drawn.