The robot is no stranger to heavy industry, but its virtual co-worker, robotic process automation (RPA), is only just beginning to find a place within the industrial sector. The technology’s clever software robots can fulfil repetitive and time-consuming tasks, and offer a multitude of benefits from improved accuracy to cost-savings.

However, with RPA failures a common occurrence in its early adoption, it’s clear that initial implementation of the technology has not proved to be smooth sailing for many businesses.

Why do so many RPA projects fail?

For multinational consultancy EY, RPA failures are all too familiar, having witnessed 30 to 50 per cent of initial projects fail. Companies developing the technology claim it can transform operations, but if it’s as favourable as they say, why are there so many RPA failures?

In actual fact, the tendency for RPA to fail is not down to the technology itself. This instead represents a misuse and misunderstanding of the technology.

“A fundamental mistake which is commonly made is that process automation is seen as a pure technology implementation delivered by IT,” says Neil MacLean, partner at EY UK and Ireland.

Other common errors that have led to RPA failures include misjudging what happens after adopting automation, thinking robots are the whole solution, directing RPA technology at the wrong processes and assuming the skills necessary for a pilot are up to scratch for real operations.

The good news is that because most RPA failures are the result of human error, rather than the technology itself, businesses can learn from their past mistakes and simply take a different approach.

Aaron Bultman, director of product at Nintex, which has its own RPA platform, says to avoid making the same mistake twice, a business must map the entire process of adoption to ensure it has a full understanding. The company should involve subject matter experts throughout, so incorrect assumptions aren’t applied, and remember that just because one process is not a good fit for RPA, it doesn’t mean the business should stop using the technology.

RPA projects that succeed teach us the same lessons as those which fail. And there’s a lot to learn from businesses that are thriving as a result of implementing the technology.

“While there are many use-cases of RPA in the office environment, where it really comes into its own is in heavy industries such as shipping, manufacturing and mining,” says Johan Carstens, chief technology officer of manufacturing and automotive at Fujitsu. “The biggest priority in these industries is worker safety and RPA is being used to reduce the dependency on humans in high-risk tasks.” 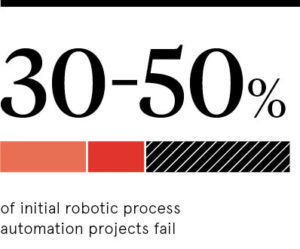 EY is working with a mining company to develop a model that helps its metallurgical team increase ore recovery. The model is based on mathematical pattern recognition techniques, or machine-learning, and uses data automations to make recommendations.

Nasa uses Eggplant’s RPA platform to automate various processes in its Orion space vehicle, which is being prepared for a mission to Mars. “Equipped with three main displays to monitor and control the spacecraft, to ensure the software behind the glass displays operates without faults, rigorous automated testing is needed,” says Dr John Bates, chief executive of Eggplant. “RPA is supporting Nasa’s mission to take humans deeper into space.”

The cement manufacturing industry uses machines to process a variety of block products and the concrete mix used to generate these blocks must be highly controlled. In the past, this process was completed manually, but nowadays RPA is used to open and close gates, measure moisture levels, and reduce human interaction to eliminate error.

There are also examples of RPA being successfully implemented by companies in the automotive industry, such as Renault, as well as in the production of radiation oncology systems, by companies including Accuray, and within
supply chain businesses.

By saving money, reducing human error and minimising repetitive tasks to free up time for employees, RPA has the capacity to transform heavy industry. But businesses must apply the right methods of adoption to ensure they make the most out of the software and do not leave stakeholders wondering why they invested in the technology in the first place.