Can a robot be man’s best friend?

We hear little about the many cobots – robots that collaborate with humans – on our factory floors and in shared workspaces. Only when a rogue robot at a car parts factory in the United States killed a technician last year did their existence come to life.

Yet there’s a growing legion of them doing repetitive and routine tasks in warehouses from Japan to Germany, the US to China. More than 300,000 will be sold worldwide in the three years to 2019, according to the International Federation of Robotics.

“The reality is that most of our customers struggle to find enough labour. This problem is becoming even more pronounced as many factory workers retire and millennials are less inclined to work in manufacturing jobs,” explains Jim Lawton, chief product officer at Rethink Robotics.

Over the last few years several reports have predicted a massive skills shortage in the global manufacturing sector, with many millions of positions forecast to be left unfilled up to 2025. Yet the demand for consumer goods is predicted to rise. Robots working alongside humans could be the answer.

“In the last eight months I’ve had many production managers ask about the maturity of cobots and how they can calculate a business-case for employing them in their factory,” says Søren Peter Johansen, technology manager at the Danish Technological Institute.

One such factory belongs to Nissan in Sunderland, which is testing the use of cobots in car manufacturing. This work is part of the ROBOTT-NET project, supported by the European Union. The idea is for cobots to reduce costs, yet be safe by design.

Standards for cobotics are very complex and getting safety right is crucial. If configured correctly cobots are not inherently dangerous. In many cases the issue is with the unpredictable human that operates alongside them.

“Repetitive handling processes are simple to automate and are often unhealthy to humans. These processes are the first to be automated,” explains Mr Johansen. “Cobots share the workplace with humans; they get very close to them. Therefore, the robots, the tools, and the parts carried by robots must be harmless to humans.”

Demand for cobots is being driven by increasing expectations from consumers for customised products, whether it’s tailor-made vehicles, food or pharmaceuticals. “Cobots will bring increasing quality and higher productivity. They will be one of the many tools needed for agile manufacturing,” says Alan Norbury, industrial innovation manager at Siemens UK.

More companies are relying on short runs of low-volume, high-mix product creations to meet consumer need. This model used to be prohibitively expensive, but already collaborative robots are helping corporations meet this demand.  “It’s such a fledgling industry that the opportunities are vast,” says Mr Lawton. “We’ll see more manufacturers adopting collaborative robots – they will change the way manufacturing is done globally.” 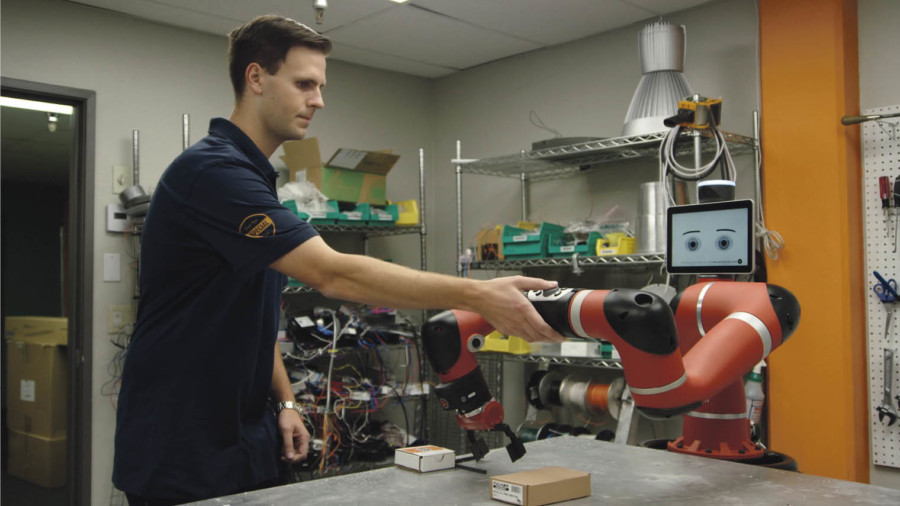 Rethink Robotics cobot Sawyer has been designed to be flexible in tight spaces with seven degrees of freedom to carry out high-volume, repetitive tasks alongside humans

Cobots have come a long way. Earlier this year, Rethink Robotics launched the industry’s first software platform that connects everything in a workplace to a single robot. The software allows manufacturers to deploy full automation using the companies’ cobots, Sawyer and Baxter, in a few hours; this is something that used to take weeks or months.

“They’re affordable, easy to deploy and can be trained to do new tasks quickly and without a programmer,” says Mr Lawton. “With the convergence of cloud computing, big data and the industrial internet of things, the opportunities for robots to share knowledge and optimise production on the fly will be enormous. We’re only beginning to see the potential for this technology.”

New jobs are also likely to be created for humans in the process of cobot deployment. These robots don’t program themselves. “We need people to program and configure this technology. There’s a whole industry and a lot of wealth to be created in this field. Moving people out of repetitive tasks will represent a huge step-change in the UK skill landscape,” says Mr Norbury.

Employers will need to manage this change since workplaces will be transformed in an increasingly automated environment. “This needs a lot of thought about the preparation, communication and transitioning from an industrial to a cognitive age,” says Mike Hobday, IBM vice president for cognitive process transformation.