From live-streaming video, mixed-reality experiences and real-time access to information, 5G is set to revolutionise the fan experience in and outside the venue 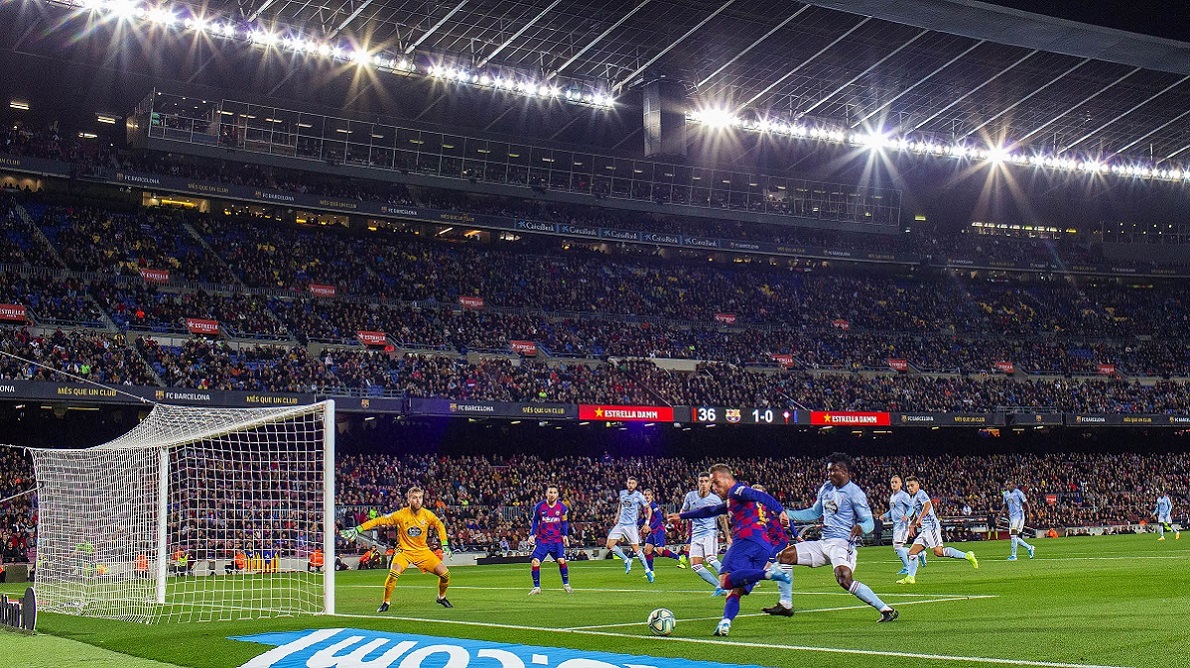 The fifth generation of wireless technology is coming and for most people the first time they will experience it is at a sports stadium. This is according to the latest research from software specialists Amdocs, which reveals that more than a third of network operators are planning a commercial 5G technology launch to correspond with major sporting events; 91 per cent of operators plan to trial 5G within sports venues by the end of 2020.

This means in the very near future, when your team’s number nine is brought down on the edge of the penalty area, you’re more likely to be watching a review of the tackle in real time, slow motion and from different angles on your smartphone than watching the ref.

At the moment, the sports stadium is one of the most frustrating arenas within which we use our phones as congested bandwidth and high latency means that even sending a simple text can be problematic for sports fans.

However, that’s all about to change with 5G technology because, according to Matt Stagg, director of mobile strategy at BT Sport: “5G will provide the vast amount of bandwidth fans need to consume and share whatever content they like. 5G gives you much more capacity per hertz of spectrum, making it more cost effective for operators to provide capacity in a challenging place like a stadium.”

In Europe, it’s Barcelona fans who will be among the first to reap the rewards of this next generation data rate as the Camp Nou will soon become the first football stadium in Europe with 5G internal coverage. The 5G service will be rolled out as part of Espai Barça, a project that will renovate the club’s 61-year-old stadium.

However, rather than the 5G technology simply allowing those fans to use their phones without any latency issues, it will open up new spectator experiences and ways for the Barcelona faithful to become even more involved in the game.

The faster speeds enabled by the 5G service mean video flows from wireless 360-degree cameras located around the stadium can be uploaded at speeds of up to 200 megabits per second, so fans will be able to gain access to instant replays from multiple angles through a dedicated app on their smartphone.

“5G finally unlocks the full potential of immersive reality,” says Mr Stagg. “The high bandwidth and low latency will enable the fan to be the curator of their own experience. This can range from graphical overlays and holographic replays to alternate commentary.”

This means that at the Camp Nou, it will be possible to see how fast Messi is running towards the goal in real time. Or how fierce Griezmann’s last shot on target was.

sporting events, according to the Amdocs research. VR is already being trialled and experimented with at stadiums in America and there are currently some quirky applications where teams are partnering with mobile operators to turn venues into 5G playgrounds for their fans.

This season the Dallas Cowboys have been using their newly installed 5G network at AT&T stadium to offer fans an AR experience whereby they can use a 5G smartphone to choose their five favourite players who duly arrive on screen to have their picture taken with the subject in the middle. Cowboys fans can also look through their smartphone to see 36ft AR holograms of players looming over the stadium.

However, these are just headline-grabbing stunts compared to the real practical applications that are on the way and are set to revolutionise the stadium experience.

“In the future, with the development of edge computing, we will have the capability to provide content without the data even leaving the stadium,” says Mr Stagg. “This will reduce the latency exponentially and, in conjunction with the extra capacity, allow the fan to choose and view different camera angles in real time as the game is happening, putting them in control of their match experience.”

Using a dedicated app, sports fans going to an event will be able to benefit from a wealth of real-time information on the best way to upgrade tickets, pay for parking, get to their allocated seats, order food and drink, buy merchandise, and even adjust the underseat heating now being installed in the world’s smart stadiums.

“AR will also help with accessibility issues that people can face, such as finding your seat in an 80,000-seater stadium,” Mr Stagg adds.

5G technology will even enhance the functionality of existing technologies, such as social media, as companies respond in real time to a hassled dad’s tweet about his child’s dropped hot dog, with stadium services able to deliver a fresh one directly to the correct seat and clean up the mess before anyone has time to get upset.

It’s not just ticketed spectators who will benefit from 5G technology, as it’s also going to have a huge impact on armchair fans too.

“The younger demographic of sports fans are adopting innovative streaming at a higher rate than other generations, paving the way for the future of media,” says Lior Friedman, vice president of global partnerships and strategy at Amdocs Media.

“According to a recent US-focused consumer survey we conducted, over three in four respondents aged 18 to 24 have live streamed a sporting event.”

The increased bandwidth and speed that 5G offers, combined with the lowered latency, brings sports streaming into its own and makes it possible to watch in real time.

At the Sacramento Kings’ $500-million Golden 1 Center, the basketball franchise is using their partnership with 5G operator Verizon to bring the thrill of sitting courtside to fans sitting on the sofa at home. Currently, fans are able to view the game in a 5G lounge, where they can strap on a connected VR headset and watch in real time from a 360-degree camera positioned right next to the action on the scorer’s table.

Eventually, the Kings plan to make this experience available to fans who don’t have a ticket, but do have a 5G connection.

And remember those 360-degree cameras dotted around Camp Nou? They will also allow Barcelona fans who aren’t at the stadium to experience the thrill of watching their heroes by connecting to a VR app and donning a pair of VR glasses. Mobile operator Telefónica will broadcast the game to them so they can watch the match from La Llotja restaurant, for example, with the best view of the stadium, closer to the action, next to the goal or even alongside the team dugouts.

This is no vision of the future as the necessary edge computing and 5G technology is already available and, according to Amdocs, 70 per cent of operators are keen to launch in line with upcoming major sports events, such as the 2020 Olympics and UEFA European Championship. So no matter where you’re sitting, you’ll be guaranteed the best seat in the house.