Factory of the future

The future is here, it is just unevenly distributed… the line from sci-fi author William Gibson’s 1984 novel Neuromancer is spot on for manufacturing right now.

3D printing is an outstanding case. Sceptics say it won’t catch on because printing metal is tricky and it can’t scale. In fact, the new generation of 3D printers have blown those doubters away.

Nasa’s Marshall Flight Centre in Alabama is producing engine parts using 3D printing. The printed nickel alloy parts are built layer by layer, using a fabrication technique called selective laser melting. The process means Nasa can iterate designs without having to recast the tooling each time. The parts were designed for the J-2X engine, part of the futuristic new Space Launch System.

In addition, Nasa is testing 3D metal printing on the International Space Station. The 3D Printing In Zero-G programme is testing both plastic and metal 3D printing in zero gravity. The goal is to give astronauts the ability to create solid metal replacement parts in an environment unsuited to normal manufacturing hardware. The long-term goal is to equip deep-space missions with versatile in-space manufacturing.

And back here on Earth? 3D printing is already reshaping factories. In Warrington, Croft Filters has been in operation for almost three decades, making metal filters for industries from water treatment to oil and gas. Founders Mark and Neil Burns with a fellow entrepreneur Darren Travis founded a sister company, Croft Additive Manufacturing, to explore the possibilities of 3D printing (also known as additive manufacturing or AM). Their new hardware allows them to produce filters in an entirely new way.

“Following the initial investment, additive manufacturing offers a long list of positives, including quicker prototype development and the ability to create never-before-possible products which can, in turn, offer time, energy and cost-saving,” says Neil Burns. These gains outweigh the downsides. “The main con is undoubtedly the price of the machine, which can be a drawback for some,” he says. The Realizer SLM-250 machine used by his startup costs £400,000 including set-up and staff training.

By using 3D printing it is possible for Croft to produce a new design of filter, beyond the reach of old-fashioned techniques. The layer-by-layer approach means flow dynamics can be improved, offering a 10 per cent performance uplift. The lack of joins means the product is stronger too.

Scale is achievable. “While there are machine-imposed limitations on the size of products that can be created,” says Mr Burns, “there is no limit of the number of products the AM machine can create overall. Often, additive manufacturing is a more viable option, especially for larger quantities as, depending on the size of the products, it can create hundreds in one build.”

3D modelling will grow because of the switch to computer-aided design (CAD) modelling. The old method of creating physical prototypes is gone. Even supposedly straight-forward products, such as washing-up liquid bottles, are designed exclusively in CAD environments. Bottle thickness, weak spots, drop-heights, squeezability and feel can all be refined. In fact, entire product lines are now modelled with CAD.

JJ Churchill is a Midlands-based maker of blades and vanes for compressors and turbines. Founded in 1937, it supplies the likes of Rolls-Royce and BAE Systems. The directors wanted to establish a new facility in Mexico. The plant was modelled and refined entirely in CAD. Consultants at The Manufacturing Centre used simulation modelling to create a prototype factory. The engineers at JJ Churchill were able to see the site layout and run through “what if” scenarios. The design could then be tweaked and iterated.

The company reported a plant utilisation increase of 20 per cent using the technique, leading to a 20 per cent saving in annual costs. Capital costs fell 82 per cent. As a bonus, the experience was subsidised by the CASiM2 project, part funded by the European Regional Development Fund, which brings the expertise of Rolls-Royce, The Manufacturing Centre and the University of Birmingham, to ambitious small and medium-sized enterprises in the Midlands.

The verdict? Kevin McCormick of JJ Churchill says: “Through the project we were able to visualise the proposed site in Mexico, and take away any potential risks in a cost-effective and reliable environment. Aside from the technical expertise we received, the CASiM2 project made it possible for us to utilise the site in the best possible way to make JJ Churchill more productive, reliable and profitable.”

This sort of collaborative approach is a growing part of cutting-edge manufacturing. The National Physical Laboratory (NPL) is the UK’s official measurements body. It employs 500 scientists and hosts 388 of the world’s most sophisticated measuring laboratories. Its new mission is to help British manufacturers improve their efficiency.

The NPL’s Product Verification Programme (PVP) offers tests to the private sector to improve product design, reduce waste and promote productivity. In one case, the NPL saved a UK company £500,000 by spotting using a thermal imaging method, called pulsed thermography, to reveal hidden flaws in turbine blade coatings. In another instance the NPL recalibrated the machines of an Oxford engineering firm, saving £18,000 a year.

Brafe Engineering, of Woodbridge in Suffolk, signed up for the full NPL review. Brafe creates castings predominantly for the oil and gas industry, in stainless and carbon steels, and nickel, titanium and copper alloys. Quality manager Ken Dean says: “Following the discovery of non-conformances in some of our products, we recognised that our inspection processes contained some inherent weaknesses. We therefore looked into the possibility of having external experts come in and give us advice on how we could improve our systems.

The technologies of the future are here. You just have to head out and find them

“The team from NPL came in for one day to conduct a PVP exercise and help highlight areas that we knew we were weak in. This allowed us to take appropriate action right away and over the following months we established four independent programmes to overcome the inefficiencies in our system.

“Manufacturers often believe they have everything under control and may even feel they know their own areas of weakness, but bringing in experts from NPL really gives them a chance to examine their operations in detail.”

The scheme comes with a fee. Mr Dean says: “Given the costs associated with the inspection, I would say that NPL’s PVP programme pays for itself.”

It’s a wise strategy. The technologies of the future are here. You just have to head out and find them. 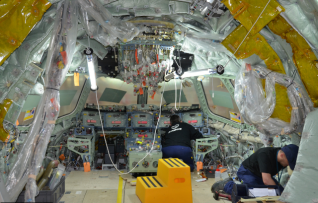 Assembly of an Airbus A350

Aircraft-maker Airbus is implementing its Factory of the Future strategy. One key new technology will be intelligent eyeglasses for aircraft assembly. On the A350 sub-assembly there are approximately 400,000 locations to be drilled, inspected and tightened during production, requiring more than 1,100 tightening tools. National Instruments created Head-Up Display glasses for Airbus. These use edge detection of the holes to provide the engineer with relevant information as work is conducted. The display brings up detailed graphics indicating bolts to be tightened and which tool to use. The tools automatically adjust torque and report to the Airbus quality-assurance database in real time.