3D printing, or additive manufacturing, was thought to be a game-changer when machines were first launched several decades ago. In the years since, the technology has made its mark and changed the way manufacturing is carried out in various sectors.

It has already delivered success in the aerospace and automotive industries, where companies such as Boeing and Mercedes have succeeded in printing parts out of metal, plastic and composites that are lighter and more resilient.

Modern cars and planes already use many parts made from 3D printing, although strict quality control and high-performance materials mean that it will be a few more years before the potential in the aerospace industry is really seen.

How Formula 1 made additive manufacturing mainstream

Within the automotive sector, Formula 1 is often the first place for technological and manufacturing innovation to take place and in 2015 the Williams F1 team used 3D-printing technology from EOS to construct the exterior parts of the front wing assembly for their 2016 racing car. The reason, like many organisations that use 3D printing, was to make the process simpler, faster and less expensive.

“With traditional manufacturing, it took the team months to produce parts it now takes a matter of hours or less. Williams now ships over 2,000 parts per month and this translates into cost reductions,” says Dr Adrian Keppler, chief executive of EOS.

But while large corporations with billions of dollars-worth of resources in research and development can adopt the technology, integrate it and use it on a regular basis, can the same be asked of small and medium enterprises (SMEs)? And is the frequency of additive manufacturing relevant when it comes to succeeding?

For SMEs, the barrier of entry has been significantly lowered thanks to the emergence of new tools and lower prices. In addition, there are also many 3D-printing bureaus, such as Manchester’s Print City, that offer mass-scale manufacturing to smaller companies, which may not necessarily have all the hardware or equipment they need.

This is often the way SMEs and startups get to exploit new technologies, through a technology partner or specialised provider. However, Asif Moghal, senior industry manager of manufacturing at software provider Autodesk, suggests that even for these smaller companies, 3D printing should be seen as part of the overall design to manufacture an ecosystem, rather than a siloed process.

“Manufacturers should outline the business problem they have and look at how additive manufacturing can be used in collaboration with other technologies to solve it,” Mr Moghal says. He adds that Autodesk has seen this approach taken by both small and global manufacturing companies.

“For example, sportswear brand Under Armour looked to generative design and additive manufacturing to improve the shape and performance of the soles of its trainers, while SME manufacturer FIT AG used both technologies, along with subtractive manufacturing, to create innovative geometries for a lighter and more efficient automotive engine block,” Mr Moghal explains.

Another SME, wooden toy producer Father’s Factory, has worked with XYZprinting to reduce the time from design to moulding from between six and eighteen months to one month by 3D printing prototypes of the latches, knobs and brackets for trialling.

“While a large company can achieve something similar, it’s particularly useful for companies similar to Father’s Factory that are producing small batch runs of products, as reducing the production timeline and decreasing labour costs makes a bigger difference to their margins,” says Fernando Hernandez, Europe, Middle East and Africa managing director at XYZprinting, who adds that the successful use of 3D printing is not dependent on scale. 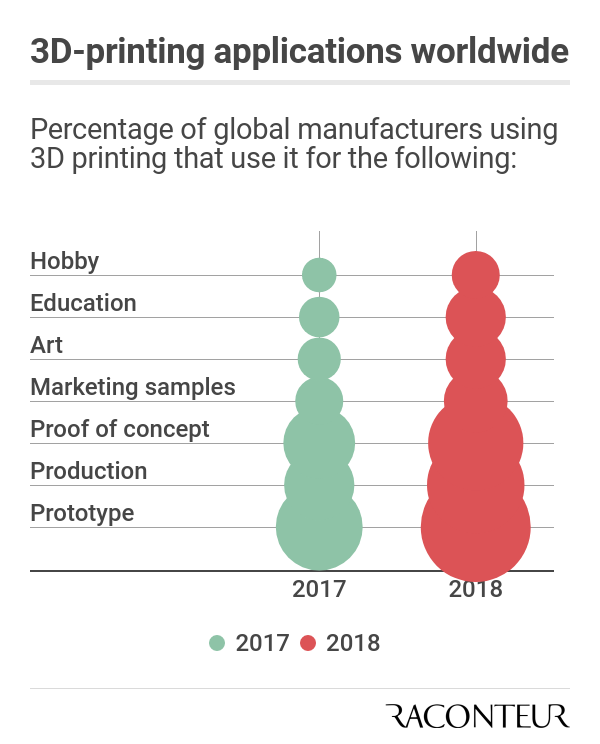 Instead, as Peter Brooke, director of UK manufacturing operations at consultancy Deloitte emphasises, companies need to be fast, flexible and capable of understanding the implications 3D printing will have on the nature of their business, whether this is in terms of cost, labour changes or competition to the normal business model and ability to compete.

“The largest machines can now be used as a single business machine by small specialist manufacturers and also by larger businesses for the manufacture of complex components,” Mr Brooke says.

Some smaller companies have brought the additive manufacturing process in house. Mental health organisation Chanua Health had initially worked with partners to 3D print a brain to help teach students studying the organ.

“We were so impressed at having an idea for a product, designing it and printing it on the same day that we invested in our own 3D printer, and we are currently designing other complementary educational aids and games using 3D-printed models,”  says Naomi Mwasambili, chief executive at Chanua.

John Bolto, specialist adviser at consultancy Advisian, suggests that the oil and gas sector can benefit from taking control of the supply chain by incorporating 3D printing into processes, and the same applies to SMEs.

“Instead of relying on manufacturers, companies can print parts on site. This gives them more ownership of the supply chain and vastly reduces the variables, like shipping or procurement, that can cause delays, while also negating the need for vast physical inventories,” Mr Bolto concludes.