Packaging is a deceptive industry. Your man on the Clapham omnibus could well assume it to be all cardboard boxes and bubble wrap. Is there any innovation? To which the industry can reply: are you kidding? Packaging is a sector valued north of $800 billion – and it rivals Silicon Valley for innovation.

One huge story right now is the revolution in medical packaging, triggered by new European Union rules. The Falsified Medicines Directive demands every pack of pharmaceuticals be given unique serial numbers, known as serialisation. Until recently the packs needed only expiration dates and batch numbers. This is a whole new ball game.

Craig Stobie, head of the life sciences team at Domino Printing Sciences, calls the EU directive “potentially the most significant technical and logistical challenge that manufacturers have faced in decades”. The deadline for compliance is 2019. Mr Stobie and his crew have been working flat out to create industry-grade serialisation processes. It’s not easy.

“At its most basic level, this has involved many manufacturers jettisoning older coding equipment simply not capable of applying a unique code to each item,” he says. “In 2011, when the directive was published, Domino Printing Sciences estimated that as much as 70 per cent of installed equipment would become obsolete in the context of serialisation.”

Packs will need to be redesigned. New inks developed. “For ink-based coding methods, such as thermal ink jet, legibility has been significantly enhanced by the development of new inks that produce clear, high-contrast and durable codes that will last for the lifetime of the product,” says Mr Stobie. “This, too, is a new requirement, since codes must now be able to be verified not just in the manufacturing plant, but right through to the point of sale or dispensing.”

The incentive for mastering serialisation is huge. The EU directive matches similar moves in Brazil, Argentina, South Korea and China, and the United States has announced its Drug Quality and Security Bill. Further, it is likely that serialisation, when proved to deter counterfeiting, will be implemented in other sectors, such as luxury goods and food.

Here’s another fast-growing technology – modified air packaging or MAP. When food and vegetables are picked, they start to deteriorate. Microbes flourish, turning ripe courgettes and carrots into a slushy, mouldy mess. Some microbes depend on oxygen. These include pseudomonas, acinetobacter and moraxella, which spoil food, giving it a bad taste and odour. The answer is to pack food with oxygen-free gases. When bacteria can’t grow, the food is preserved for much longer.

How much longer? Linde Gases, a pioneer in the field, calculates raw red meat can be extended from two to four days to between five and eight. Raw poultry can be extended by triple the normal span; sandwiches from three to ten days.

The question is which gases to use. Linde Gases advocates varying mixtures, depending on the food stuffs. Some require nitrous oxide, argon or hydrogen. Others recommend a more traditional mix of carbon dioxide, nitrogen and even some a tiny dose of oxygen (1 to 2 per cent, at most, down from 20.95 per cent in the atmosphere). Carbon dioxide is effective at inhibiting microbes, but absorbs into the food’s liquid and fat, reducing its pH value. It can also cause changes in permeability and texture.

Dairy brands are keen to improve duration. Dale Farm, one of the UK’s major dairy co-ops, identified a major problem with its packaging. Traditional heat-shrink-wrap heat-tunnel machines, used to package yoghurts and crème fraiche for transport, generated a lot of heat. The machinery became so hot, the whole dairy was hard to work in. Not good.

The solution was heatless shrink-wrap machines made by TrakRap. This eliminated the problem completely and improved the eco-performance of the process. Without a heating bill, Dale Farm cut electricity usage for pack wrapping by 95 per cent a year. The film used by TrakRap is 100 per cent recyclable and so thin that 68 per cent less material could be used. For a major national brand such as Dale Farm, an innovation like this makes a serious contribution to its long-term prospects.

One final innovation. Birch Water is a traditional drink in Finland and a new brand has just been launched in the UK called Tåpped. Birch Water is a curious beverage. It’s made from the sap of the birch tree, tapped once a fortnight. The liquid is high in manganese, zinc, iron and other minerals.

A product like this needs special packaging to impress potential customers. So the executives at Tåpped asked creative agency Horse to come up with something fitting. The result is an aseptic “lamican”, made of 75 per cent wood. It gives the product a shelf life of 12 months, and Horse claim the material has 12 per cent of CO2 emissions compared with aluminium and 19 per cent that of plastic.

“Although a traditional spring-time drink in Finland and other parts of the world such as Canada, tree waters are a totally new concept to consumers in the UK,” says Ian Firth, creative partner at Horse. “Clarity of product communication was therefore paramount, so we used the packaging structure to our advantage. To help communicate provenance, the water is packaged in a cylindrical paperboard can, which we designed to resemble a real birch tree. This helps overcome some of the challenges of communicating an unusual new product, but equally distinguishes the water from other beverages.”

Will it sell? Various fashion industry magazines have called Birch Water the new “super food”. If it does take off, the packaging industry will, as usual, have played a vital role.

Dell is one of the world’s biggest manufacturers of laptops and PCs. It is also an enthusiastic champion of eco-friendly packaging. Oliver Campbell, Dell’s director of worldwide procurement and packaging, explains his strategy: 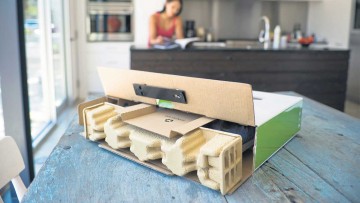 “We’ve been introducing new, organic materials that perform the same as their less sustainable, traditional materials. For example, by injecting mushroom spores into a mould with agricultural waste materials, such as cottonseed and rice hulls, we’re actually growing cushions that serve as an organic, compostable alternative to Styrofoam for heavier server products. We also use wheat straw to produce corrugated boxes, mixing straw with recycled paper to create cardboard in a process that uses 40 per cent less energy and 90 per cent less water than traditional methods.

“Our focus for packaging reflects a lot of what we see in the natural world, as it’s a continuous cycle of use and reuse. We apply this approach to the way we handle our day-to-day operations, our product design and to production for packaging.

“We also seek out partnerships that help advance innovation. For example, we partnered with Newlight Technologies, a startup out of southern California to produce our industry-first AirCarbon plastic packaging made from methane gases that would otherwise become part of the air. This process sequesters more carbon than it produces, pulling carbon from the air and generating a net-positive impact on the environment. It also costs less than oil-based plastics. These partnerships help advance sustainable innovation and create a market for sustainable alternatives for our industry and beyond.

“Businesses are becoming much savvier when it comes to creating smart and sustainable supply chains, and eco-packaging is just one example of a company bringing its business process in line with its environmental principles. We’re starting to see real changes in attitudes towards packaging and we hope this is just the beginning for companies who want to go the extra mile.”

Fresher food and safer medicine – packaging steps up its game

Litter is about laziness, not about packaging

Also in Future of Packaging 2015