An influx of slimy sargassum seaweed has been blighting Mexico’s Caribbean beaches, but new innovation has found smart ways to make it pay 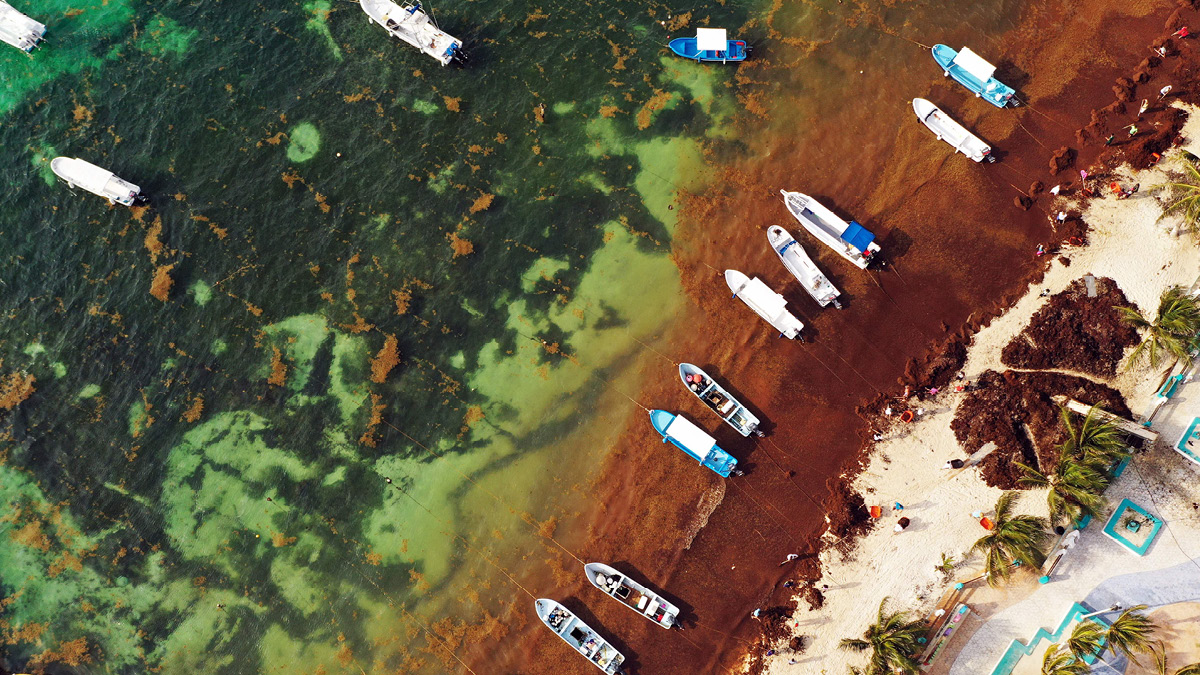 Mexico’s Caribbean coast is famous for its pristine white sandy beaches and warm turquoise waters. Resorts such as Tulum in the south have become a magnet for the global jet set.

But over the last few years tourists in the summer months have seen an increasingly despairing sight as great blooms of sargassum seaweed have been washing up on shore, fanning out in thick brown clumps on the surface of the water and leaving long, rotting heaps on the beach.

How big is the sargassum seaweed problem?

While the exact cause for the rise in sargassum is unknown, scientists suspect a combination of climate change and pollution from agricultural run-off is to blame. Between April and October last year, one million tonnes of sargassum was deposited on Mexico’s beaches.

“Even though it isn’t here the whole year, it is affecting the tourist industry,” says Alvaro Castro Martinez, owner of Tulum-based hotels Playa Esperanza and Tropicalito. “In the first year, people were still making reservations for the second year, but in the second year they stopped. People don’t want to risk paying six months or a year in advance for a very expensive vacation if the principal objective is to see these beautiful beaches and ocean.”

Removing the seaweed is a Sisyphean task during the sargassum season. “You spend half the day clearing the beach, only for the same amount to wash up again in the afternoon,” says Castro Martinez. 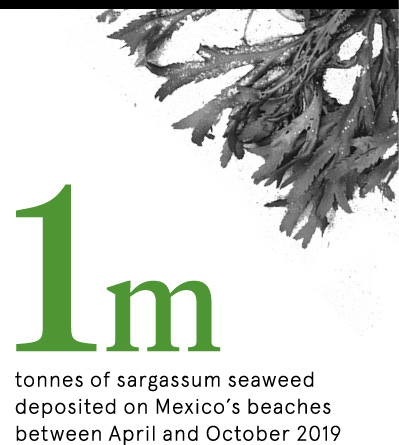 With part of Mexico’s roughly $23-billion-a-year tourism revenues on the line, last year the government’s science and technology council, Consejo Nacional de Ciencia y Tecnología, started funding a research project with the Polytechnic University of Quintana Roo to try and turn the sargassum seaweed problem into a sustainable business opportunity.

“The first step was to talk to different groups of scientists and just see what kind of ideas were out there in terms of what potential economic uses sargassum might have,” says Jorge Canto, project manager of the research programme. “Then we had to assess if it is technically possible, what the social and ecological impact would be – you don’t want a solution that is even worse than the problem it is trying to solve – and finally whether or not there is a market for it.”

Canto and his team of scientists have identified three uses with potential commercial value in the pharmaceutical, agricultural, and oil and gas industries.

One of the properties in sargassum seaweed is sodium alginate which, when extracted, can be turned into a thickening agent used in pharmaceutical products and creams. The global sodium alginate market is worth around $624 million a year and is expected to grow to almost $1 billion by 2025, says Canto.

“If we could get 20 per cent of the global market share of sodium alginate, that would use 35 per cent of the entire amount of sargassum that arrived on the coasts of Mexico in 2019, so that’s a third of the problem solved by just this one product,” he says.

Sodium alginate, when extracted, can be turned into a thickening agent used in pharmaceuticals

Another potential sustainable business use is as a biofertiliser in the agricultural industry. Mexico’s farming industry is mainly concentrated in northern and central Mexico, in part because it relies on fertiliser imported from the United States, which is expensive to transport to the far south, says Canto. Producing fertiliser locally could help boost agricultural production in the Caribbean region.

“We proposed to do something with the sargassum that would be neutral to the environmental problem, provide sources of income to the people who live in the region, and to provide good and cheap agricultural inputs,” says Adriana Luna, co-founder of Mexico-based biotechnology company Tierra de Monte, who is heading up the fertiliser research.

Luna’s team found that sargassum can create three agricultural products from one process. By heating and then filtering the seaweed, a concentrated liquid can be extracted to use as a biostimulant for crops. The waste from this can then be used as a substrate for growing mushrooms, with the debris turned into compost and spread on fields to enrich the soil.

The third potential commercial use is as a corrosion inhibitor for oil and gas pipelines. Compounds found in sargassum are similar to those used to prevent corrosion in water heaters and could stop steel pipelines from being damaged, says Canto.

“This has more value than the fertiliser, but the use is more specific, so it might not use as much sargassum. But it would have a bigger economic impact, which is particularly important for the harvesting of the seaweed,” he says.

Collecting the sargassum is an expensive job. The Mexican navy has built special boats that can harvest the blooms directly from the sea, much like marine combine harvesters. But knowing where to find the sargassum in the open ocean is not easy. Another part of the project is attempting to solve this by developing a detection system that uses satellite imagery and artificial intelligence to predict how and where the sargassum seaweed is travelling.

“That enables us to pinpoint where the big spots of sargassum are heading so we can give the co-ordinates to the navy so they know where to go to harvest it,” says Canto.

By creating a market value for sargassum, local fishermen could also be incentivised to help collect the seaweed and take it to a local processing plant, generating another sustainable business opportunity, says Lorenzo Martinez, who is managing the commercialisation aspect of the research.

There is, however, one small hitch to developing a market around a natural resource that is not always available. “All the business models need to take into account that sargassum only arrives for six months of the year, so for half the year you have a shortage of your primary material,” says Canto.

And what happens if the recent increase in sargassum seaweed turns out to be a temporary phenomenon?

Martinez is sanguine. “Even if it is a season with a low level of sargassum, the amount of sargassum is enough to create an industry,” he says.