No animal is so stupid or greedy as to foul its own nest, except the human animal. So declares Yvon Chouinard, 80-year-old founder of Patagonia, the US outdoor apparel brand and much-heralded paragon of sustainable fashion.

The comment appears in his new book Some Stories: Lessons from the Edge of Business and Sport. Its 464 pages are a testament to a life lived in nature. As a young man in northern California, he helped open up some of Yosemite’s most iconic climbs. These days he is more likely to be found in his waders casting a fly.

If you can create a company of honest messaging and truth, your customers will look to you for what’s right

Chouinard may have a dim view of the impact of the human species on our planet, but he is no misanthrope. He is amiable, down to earth and, if the mood takes him, something of a raconteur.

What he certainly is not, however, is a man who minces his words. Take his attitude towards consumers. Despite owning a global fashion brand, he likes to cite the dictionary definition of a consumer as “someone who eats up, destroys”.

Encouraging customers “not to buy what they don’t need”

But it doesn’t have to be that way. As he says, the strongest word in the English language is “no”. “Brands can come up with whatever product they want and advertise the s**t out of it and we can just say ‘no’. That’s pretty strong,” he says.

The comment is revealing in two respects. Firstly, his use of “we”. Chouinard isn’t some distant business mogul, far removed from the men and women who buy his firm’s products. He feels a kinship with his customers. It’s a kinship borne out, in large part, of a shared and enduring love of adventure and wild places.

Secondly, the comment shows him to be a man of principle. If he feels something isn’t right, he will call it out, even if it threatens to hit Patagonia’s profits at the till.

Most famously, in 2011, Chouinard signed off on a one-page ad in The New York Times – as a rule Patagonia doesn’t go in for paid advertisements – that read: Don’t Buy This Jacket. The ad, which was designed to highlight the environmental impacts of superfluous spending, ran on Black Friday, the busiest online shopping day in the US calendar.

As he explains in an earlier book The Responsible Company, the logic behind the campaign was simple: “If you want to reduce the environmental and social harm you do, the injunction to reduce comes first. Don’t make what won’t be useful or won’t last. Don’t buy what you don’t need.”

Why the Patagonia leader is suing the Trump administration

This same spirit of principles-led business manifested itself more recently in Patagonia’s decision to sue the President Donald Trump administration. Appalled by the US president’s decision to roll back federal protections for conservation areas, known as national monuments, in Utah, Chouinard agreed to throw the company’s weight behind a lawsuit initiated by native American and environmental groups.

Not every business leader has such a disruptive, anti-establishment nature. After all, this is the man who compares entrepreneurs like himself to juvenile delinquents: “You know, the juvenile delinquent says, “This sucks. I’m gonna do it my own way.”

And, even if they did share his rebellious streak, few executives have the same freedom to act. If speaking out on a controversial topic dents profits, so be it. As sole owner, Chouinard can do as he pleases. Managers in public-owned companies, in contrast, have shareholders to answer to.

He isn’t blind to the conundrum that professional corporate leaders face. He cites the example of Danone. Under the leadership of chief executive Emmanuel Faber, the French food giant that recently achieved the ethical B Corp certification. Even so, he predicts Mr Faber’s hands will be tied. 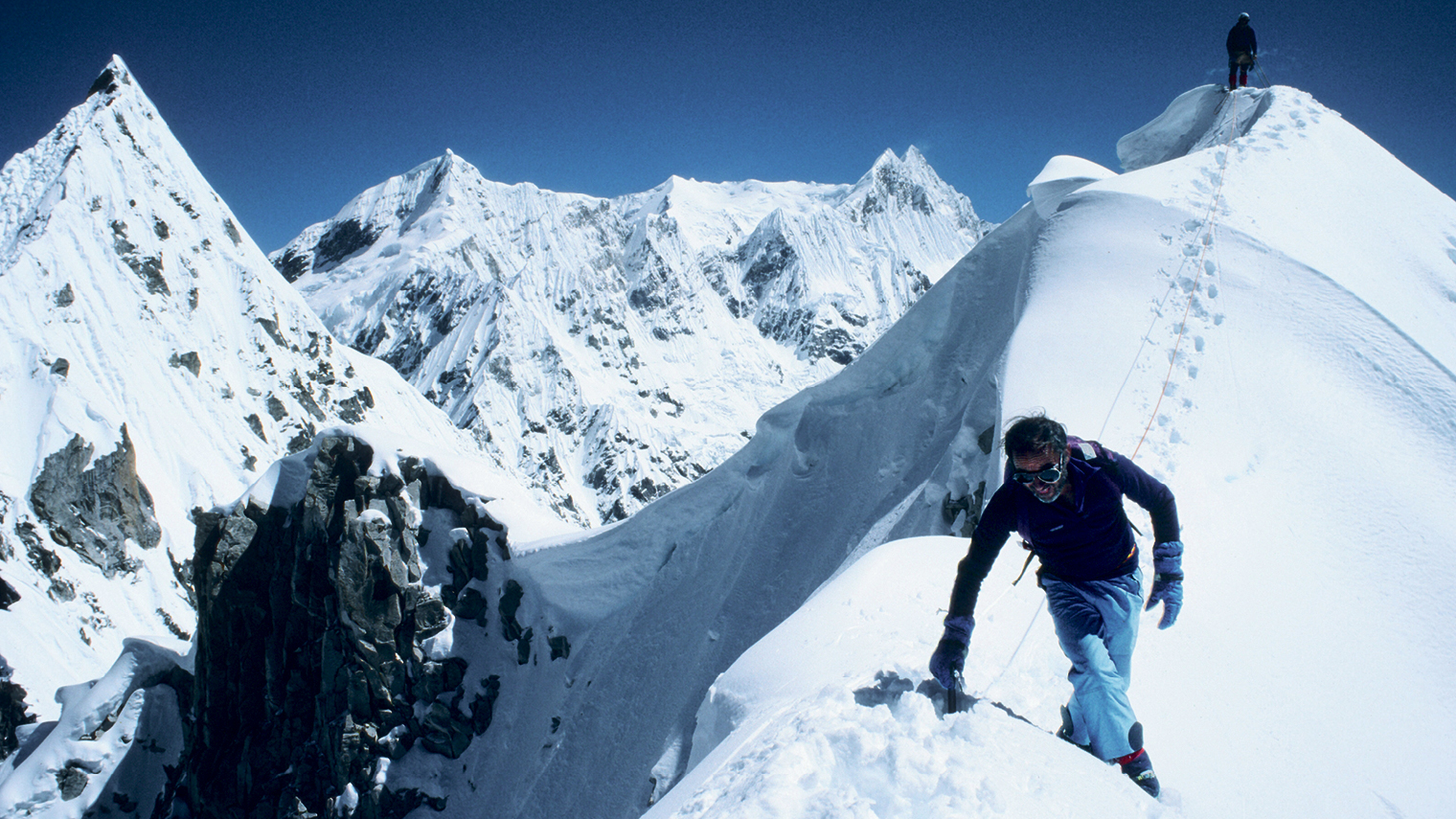 Yvon descending from the summit of an unnamed and previously unclimbed 20,000ft peak in central Bhutan

Viewing eco-activism as a drag on profits is totally wrong headed, Chouinard argues. After all, for 46 years, Patagonia has been sounding off on everything from climate change to ocean waste. And, through that time, sales revenues at the upstart brand have crept ever upwards.

Proof again comes in the shape of the brand’s bold Black Friday advertisement. Compared with the previous year, Patagonia’s US stores clocked a fourfold upturn in till receipts, an outcome that Chouinard swears he did not anticipate or intend.

So what, if anything, can other fashion brands learn from Patagonia’s maverick founder when it comes to brand activism?

Three lessons, at least. Firstly, get yourself a credible narrative. Chouinard’s view of the world – in a nutshell, wild is good and rampant consumerism bad – may not be to everyone’s taste, but at least it is ethically consistent and intellectually defensible. Moreover, as the impacts of unsustainable use of resources become evermore apparent, it is a narrative that chimes with an increasing proportion of the buying public.

Secondly, don’t sugarcoat your message. Be bold. If you believe it, say it. Consumers are “really hungry” for their favourite brands to take a stance on issues of public concern, says Chouinard.

Thirdly, be true to your message in what you do, not just what you say. It is difficult to fault Patagonia here. Under Chouinard’s leadership, the brand has switched to 100 per cent organic cotton, given millions of dollars to environmental causes, and led the way on childcare provision for employees and fair wages for overseas factory workers.

Nor is it just the company’s own house that it has occupied itself with. In 2011, it helped found the cross-sector Sustainable Apparel Coalition which, among other activities, has helped develop a widely used standard for measuring the sustainability of footwear and clothing products.

No company can be perfectly sustainable

Arguably, the most important lesson Chouinard has to share is that being true to your message does not equate to being perfect in all you do.

Nothing stymies brands more when it comes to speaking out than a fear they will be branded hypocrites. Chouinard’s response is simple: fess up. Consumers don’t expect brands to be absolutely faultless. Honest, yes. Perfect, no.

This has been Chouinard’s line all along. Where problems have come to light, as with the chemical pollution associated with conventional cotton farming, for instance, the brand has sought to take remedial action.

Where technological or economic limitations make remediation difficult, it commits to continue working on the issue until an adequate solution can be found. A good example is wool production which, due to sheep’s grazing habits, has a major, destructive effect on local biodiversity. Patagonia has made some advances, but not enough.

But as Chouinard unashamedly says, there is no such thing as the 100 per cent sustainable company: “We can try to do good, but it [perfect sustainability] is against the laws of thermodynamics; everything costs something.”

Nor is he simply speaking generically. With characteristic candour, he turns the focus on Patagonia itself. He says: “I look at my company; it’s causing an incredible amount of harm with all the resources we’re using. So we have a responsibility to do something now.”

It’s a smart message. Why? Because it tells consumers what they instinctively already know. Of course, brands must still strive to become more sustainable. Yet, when a brand’s cards are laid out so plainly, such frankness gives them the licence to step up and speak out.

“If you can create a company of honest messaging and truth, your customers will look to you for what’s right,” he says.

They are certainly doing so in the case of Patagonia. In recent years, the fledgling brand has exploded to become a high-street name with sales revenues topping $1 billion.

So if, as Chouinard claims, customers are looking to outspoken brands for guidance, what single message does he have to share? For someone who has, despite his best efforts, seen the gradual deterioration of our natural world, his response is remarkably upbeat.

“If we acted responsibly worldwide right now, we could really solve a lot of problems,” he says. “But it has to be done worldwide and now.”