Have you wondered about the amount of carbon emitted to produce your favourite burger patty, sausage or ready-made lasagne and have it transported to a local supermarket? Soon you may no longer need to wonder.

In January, the plant-based, meat-alternatives manufacturer Quorn announced it was launching carbon footprint food labels. While the carbon footprint information is currently only available online, it’s expected to be rolled out to physical packaging later in the year.

According to Quorn, its customers are actively looking to reduce the impact eating and shopping habits may be having on the environment. The labels will be a tool that helps them make more informed, smarter decisions.

It appears the appetite for carbon footprint food labels isn’t limited to loyal fans of the Quorn brand either. Research published last year by the Carbon Trust, which will be responsible for certifying Quorn’s data, showed two thirds (67 per cent) of more than 9,000 people surveyed supported the idea of a standardised carbon label. However, 52 per cent admitted the carbon footprint of food is not something they currently think about when buying products.

The move by Quorn isn’t a first for the industry. In 2007, PepsiCo measured and displayed carbon footprint data on packets of Walkers crisps, bottles of Tropicana orange juice and boxes of Quaker Oats, albeit for a short while. That same year, Tesco announced it was to roll out similar carbon footprint food labels on thousands of its products.

Despite the supermarket’s best intentions, the scheme was short lived and ended in 2012. One of the reasons cited at the time of the withdrawal was the lack of other supermarkets following suit meant the labels didn’t have the desired impact with consumers.

Then-climate change director at Tesco Helen Fleming told the food and drink industry magazine The Grocer: “We expected that other retailers would move quickly to do it as well, giving it critical mass, but that hasn’t happened.”

Fast forward and the likes of Premier Foods and Nestlé are now reportedly considering adding carbon footprint data to their products.

If the retail climate is now riper for carbon footprint food labels than it was in 2007, the success or failure of any scheme is ultimately going to hinge on whether it leads to an increase or drop in sales.

“We know consumers are increasingly interested in the provenance of their food and there’s been significant growth in manufacturers using solutions like blockchain to help consumers understand the journey their food has taken. But we need to consider if carbon footprint labelling is really going to encourage shoppers to make different, more sustainable, purchasing decisions,” says Dominic Watkins, head of food and retail at global law firm DWF.

Like we’ve seen with nutrition labels, consumers don’t always understand the meaning of what they’re reading

How the information is displayed will be key to how consumers respond to labels. In theory, a colour-coded grading system, or climate score, would make it easy for consumers to digest the information and help them to compare the environmental impact of different products. 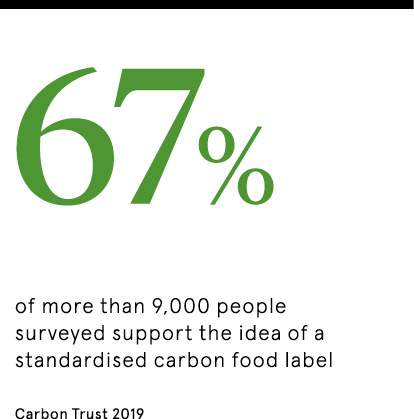 That said, while consumers may be aware that green signifies a good score and red poor, there can often be a disconnect between the information presented to them and the facts they need to make an informed decision, argues Mark Dodds, chair of the Chartered Institute of Marketing’s food, drink and agriculture sector interest group.

“Like we’ve seen with the traffic light [nutrition] labelling of food, consumers don’t always understand the meaning of what they’re reading,” he says. “There has also been a debate on what constitutes ‘good’ and ‘bad’.”

Dodds believes there’s a need for a large-scale education programme, where the difference between a good and poor score is communicated to consumers properly.

The need for industry-wide measurement

On top of this, says Watkins, the practical challenge is there’s currently no easy, uniform way to calculate carbon footprints; the manner in which it’s measured will need to be made more explicit. There are many factors that can determine a product or ingredient’s overall environmental impact. How much water was used to raise livestock? What animal feed was used? Were crops sprayed with fertiliser? Was refrigeration required during transportation?

Watkins adds that the industry needs to set out a clear and consistent set of rules. Without a universal standard, a food manufacturer may be able to avoid disclosing its products’ true carbon footprint by being selective about which stages of its supply chain are included in the carbon calculation.

As a result, similar products with different production methods may end up carrying similar carbon values. This could cause confusion for consumers, says Dodds. 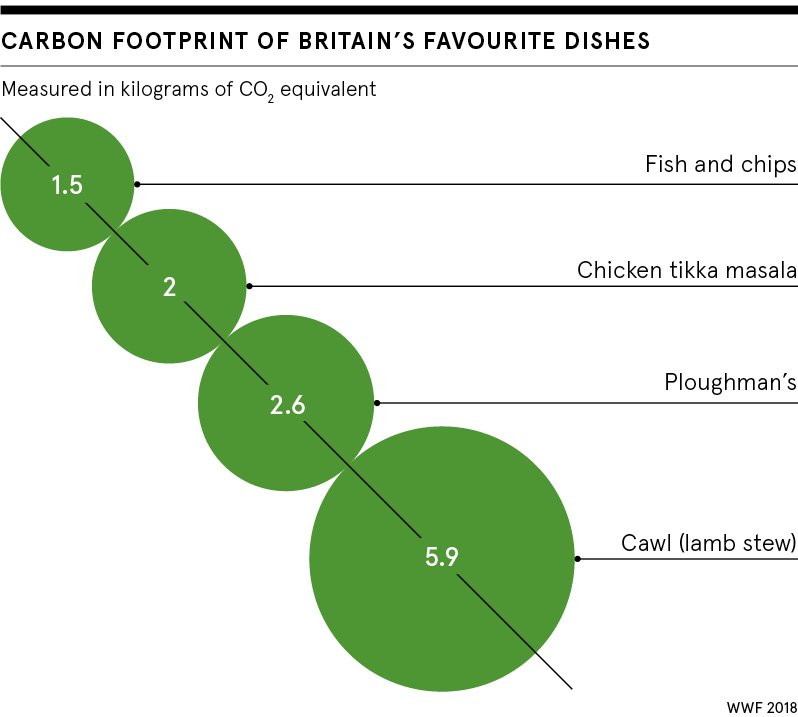 Though he adds: “If a food manufacturer invests properly in the processes and procedures to reduce carbon emissions, then there’s a real opportunity to gain a market advantage.”

Even with a universal set of rules in place, any labelling scheme should be voluntary, like the majority of food certification and assurances schemes, including the Organic and Rainforest Alliance for example, already being used, says Watkins. Enforcing manufacturers to be part of a mandatory scheme could prove a significant financial burden, especially for smaller manufacturers that don’t have the time, resources or technical capacity to measure their products’ carbon footprint.

But the question of whether carbon footprint food labels would lead to people shopping and eating more sustainably is open for debate.

“Making greener purchasing decisions is a growing concern for consumers and increasingly a point of differentiation for brands,” says Dodds. “But it remains to be seen whether the impact of investment in carbon reduction will pay off at the checkout.”