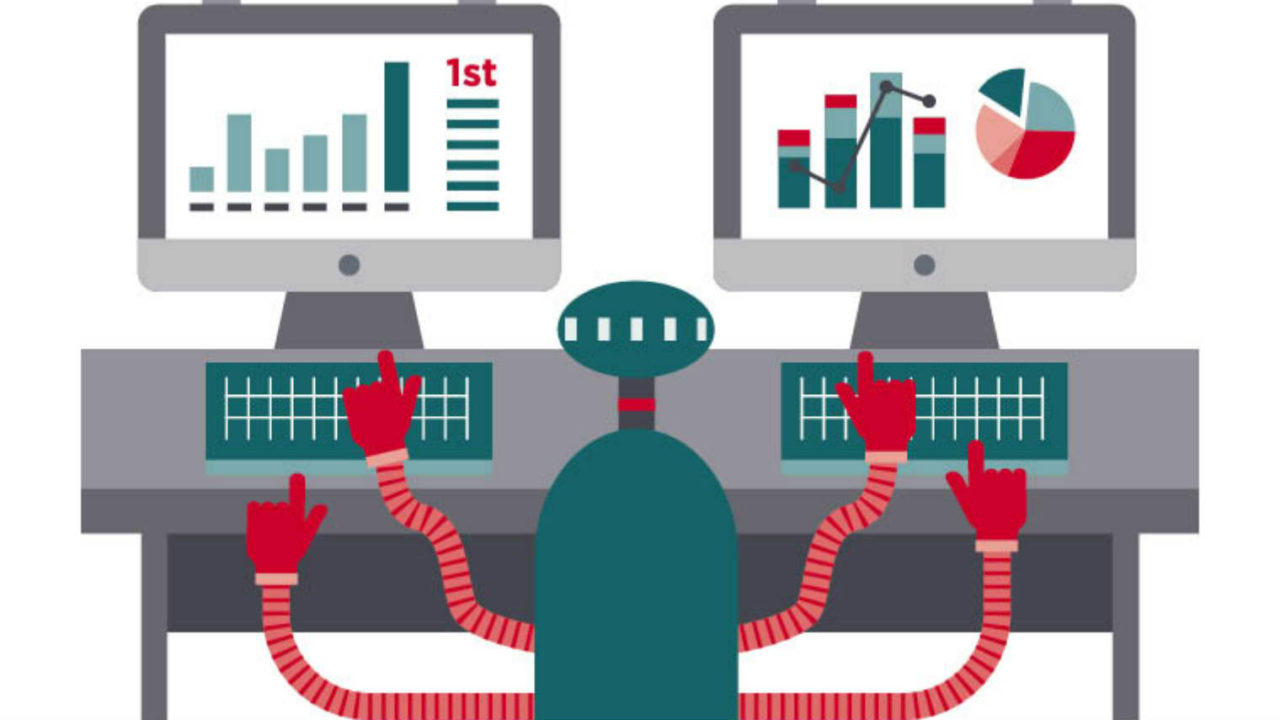 Throughout human history we have been inventing things to make life easier, extracting physical effort from the means of production and replacing it with machines that can do the job quicker, safer and more efficiently.

Examples include the Spinning Jenny in weaving, windmills, combine harvesters and the robotic arms you occasionally see screwing parts together on the factory line. The latest development in this long line of invention is not hardware, however, but in computer programs.

Robotic process automation (RPA) isn’t a physical construct that picks things up and puts them down again, but software which knits together processes from beginning to end. It can be described as a set of virtual employees taking care of the rules-based, repetitive tasks that ensure things run smoothly.

The motive for creating such a system is straightforward. Humans are fallible, they get bored easily, they need sleep, breaks to eat and use the loo, as well as significant periods of time off each and every year to decompress.

Machines clearly don’t. They work at night and weekends, are less prone to errors than people and, as yet, there is no trade union for robots, so they never go on strike.

Robotic process automation isn’t a physical construct that picks things up and puts them down again, but software which knits together processes from beginning to end

The like-for-like swap of people for machines has many things to recommend it, but RPA goes further, according to Neil Kinson, chief of staff at automation and robotics specialist Redwood Software. There is an opportunity to run things a lot better, not just faster, than before.

“As robots have become increasingly sophisticated, we are no longer talking about simply replacing person A with robot A, and person B with robot B,” he explains.

“RPA refers to the automation of business processes, whether in HR, the supply chain or the finance function, and the interdependencies between these functions. In short, it’s a move from a user-centric to a process-centric view; a holistic rather than piecemeal approach.” 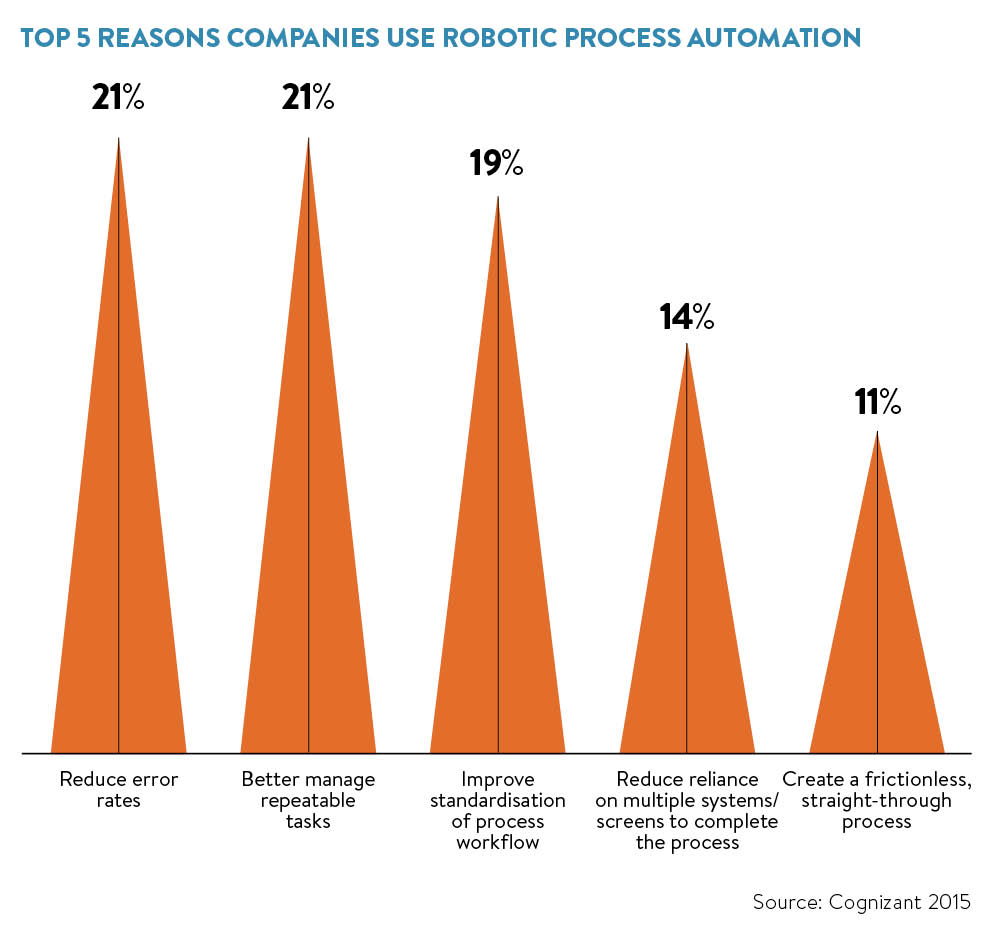 Automation is nothing new – the word itself has been around for decades – but in the last five years it has taken on a new lease of life. The technology that underpins it is moving forward at a quick clip and we are only just starting to see transformative results in industry.

Mr Kinson says RPA enables organisations to plan, implement and control the flow of money, people, resources and goods in an ongoing framework. It has the capability to “reimagine” human activity rather than merely replicate it.

Even better, the fact that machines are taking care of business means reams of data are created as standard and crunched to order. The added benefit is that organisations in future will find it a lot easier to uncover actionable insight to make processes work better.

All good, but the rise of these super-bots raises an obvious question: what happens to all those jobs? Yes, they were menial and not the kind we dream about as children, but they pay wages and support families. Won’t taking them away from people cause a huge headache for the economy?

This question mark hangs not just over the UK, but entire sectors that have sprouted across the world, in China, India and Eastern Europe, to handle jobs for companies based in developed economies. Outsourcing tasks offshore, once a no-brainer for company cost-cutting, will start to look like an expensive alternative to simply running a software implementation in-house.

Business premises can move to the cheapest parts of the world now there is no need to source a local workforce or offer them an attractive environment in which to do their job. So won’t people lose out?

The short answer is no, at least according to the experts. The idea is that people usurped by digital rivals can be retrained and refocused on core business tasks, creative jobs or customer-facing roles that still require human input and robots can’t, as yet, take away from us.

“By eliminating the need for humans to perform certain manual duties, it facilitates opportunities for those staff to be creative, rather than taking jobs away from human workers. It is for this reason that leading businesses across multiple industries are using RPA as a vital component of a broader digital transformation strategy.” 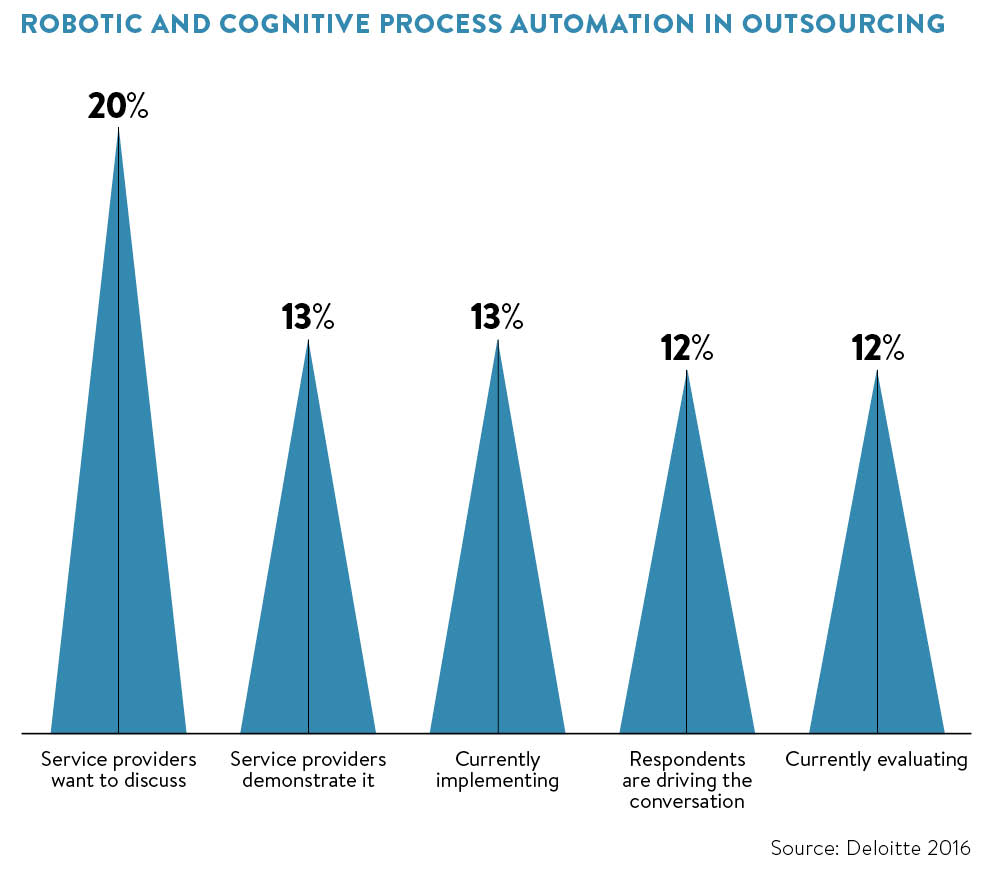 Although RPA technology is in its first phase, it is already making a big impact on the way organisations are run. Ram Singampalli, head of managed services at Syntel, says smart automation technology can boost efficiency by 70 per cent, cut IT costs by more than a third and improve quality by 45 per cent.

But RPA 2.0 is already in the offing, combining with other constituent parts of the “fourth industrial revolution”, such as big data, artificial intelligence (AI) and the internet of things, to create increasingly sophisticated potential.

“RPA has to be integrated with cognitive and machine-learning in order to learn processes and functions. This will give it the ability to leverage the power of AI, and accelerate the adoption and dynamic adjustment of process change in the digital world,” says Kalyan Kumar, executive vice president, HCL Technologies.

Mr Kinson at Redwood Software adds: “Word in the industry is that we are quickly moving away from RPA 1.0, which is first-generation analogue robots commonly used as a tool, towards RPA 2.0 that comprises digital robots with embedded best-practice process competence, used as a standalone solution.”

The efficiency-enhancing, labour-saving, profits-boosting and boredom-reducing benefits of RPA mean it is becoming an organisational shoe-in for companies that can use it. As it becomes better, the reasons to get involved will redouble, creating a two-tier business environment with RPA-fuelled firms on top and unbelievers playing catch-up.