The UK is a nation obsessed with screens. We’re either watching TV, working on a laptop, online shopping via a tablet or most likely: using our phone to message friends. Back in 2015 Ofcom even dubbed Britain a “smartphone society” when smartphones overtook laptops as internet users’ number one device. Nowadays, 59 per cent of internet users say they are hooked on the device they’re most likely to use to go online, and 34 per cent even find it difficult to disconnect.

The five charts below reveal the extent of mobile addiction in the UK: 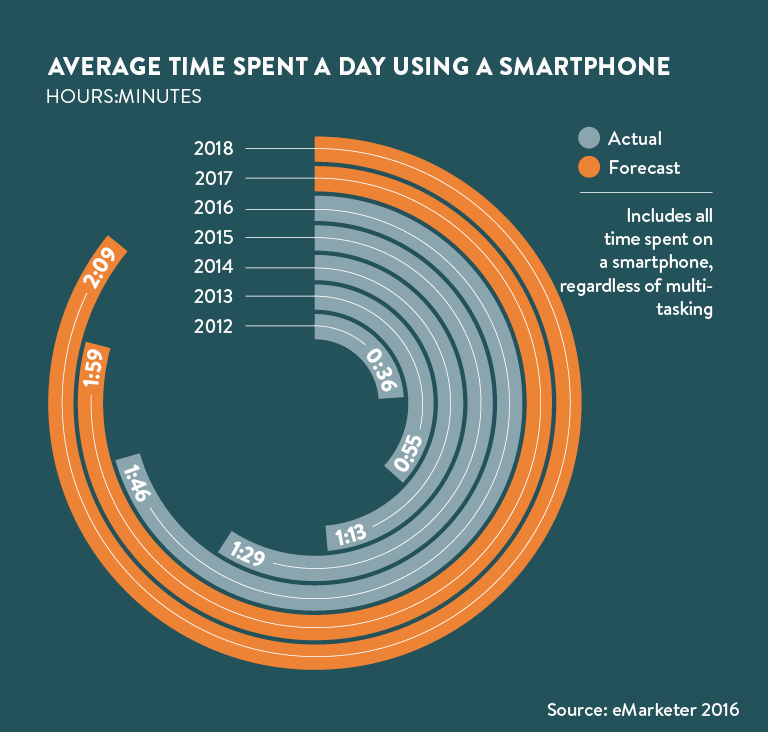 How often do you check your smartphone every day?

In 2012 Brits spent just 36 minutes a day on their phone, four years later the figure has increased to 1 hour 45 minutes. Although this estimate may seem small to some smartphone addicts, the graph above shows time spent on our phones will only continue to rise.  In 2018 the average time spent using a smartphone is set to be over two hours.

Using a smartphone while doing other things 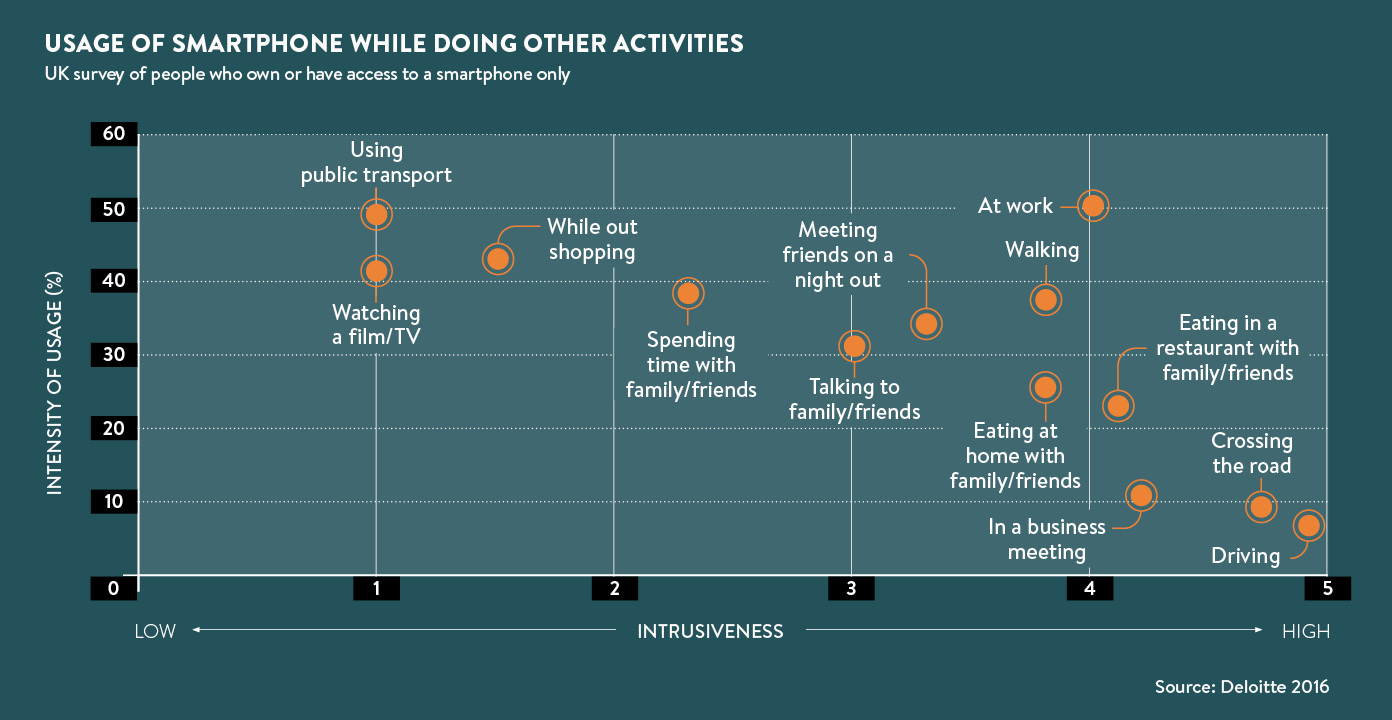 The most popular time to use a smartphone is when travelling on public transport. It’s hardly a surprising finding, morning commutes are packed with train carriages filled with people looking down at a device in their hand.

However, interestingly, people use their phone as often at work as on public transport. The graph above shows that it’s fine to have a quick look at Instagram at your desk, or send a WhatsApp, but being on your phone in a meeting is a big no, no. The survey found over 10 per cent of people do it, but it was deemed highly intrusive (coming third after crossing the road and driving).

Checking a smartphone after waking up and before bed

Ten per cent of Brits with a smartphone check their device the moment they wake up, a further 33 per cent check their phone within five minutes of waking up. On the other hand, 43 per cent of people check their phone 15 minutes before going to sleep at night. The stats above show as a nation we find it hard to switch off. Using a device this often can have negative consequences on our lives, one being difficulty sleeping (find out more here).

Using a phone in the middle of the night 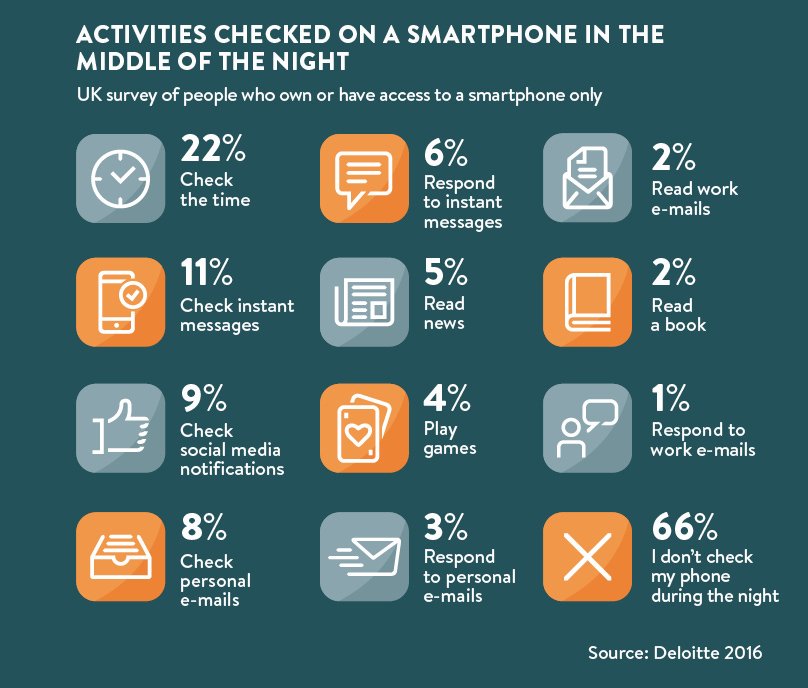 When it’s not okay to be on your phone… 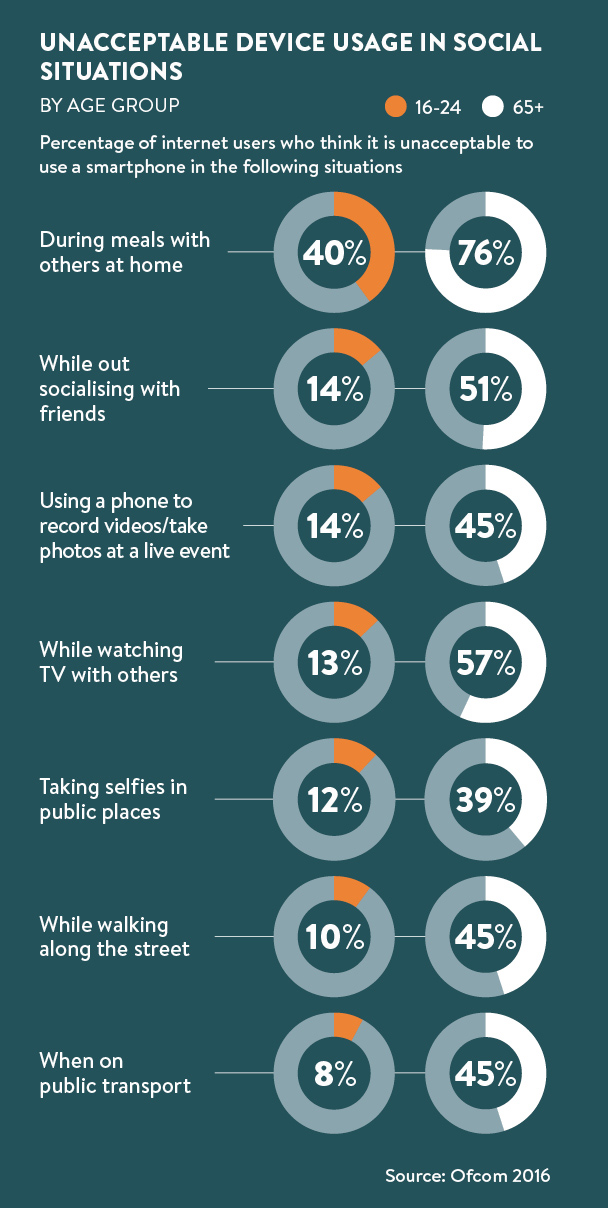 During meals at home with friends or family is deemed the most unacceptable situation to be on your phone. Forty per cent of 16-24-year-olds said it wasn’t okay, while 76 per cent of those over 65 said it was unacceptable. Yet, the chart above shows that youngsters are more accepting of people being on their phone in social situations compared to the older generation. Only 14 per cent of under 24’s think it’s not okay to be on your phone when socialising with friends, while 51 per cent of those over 65-years-old believe it’s not acceptable.

Want to know more about the UK’s smartphone addiction? Read our feature here