In the future, it may be what you tell your friends when you land a job with one of the world’s biggest blue-chip companies: “A robot chose me.”

Perhaps it’s still some way off, but insurer Allianz is moving in that direction. Go to its careers page on Facebook, send the company a message and you will instantly get a reply from Allie.

Allie is not a person, but a chatbot who deals with inquiries about job vacancies. “She” will ask you a series of questions about where you want to work, in what area of business and at what level, and then point you in the right direction. 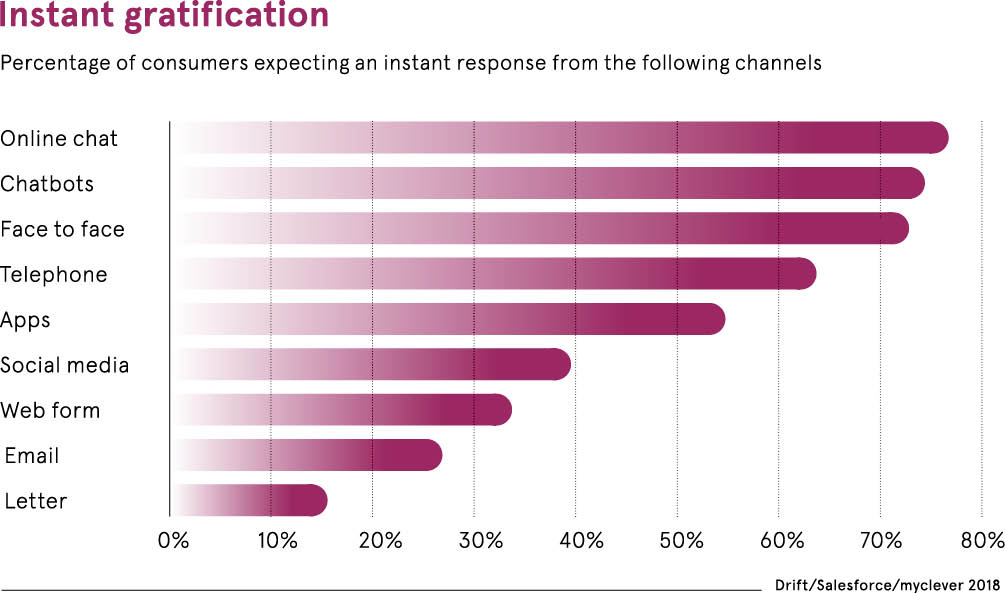 Dominik Hahn of Allianz’s global People Attraction team says the reason for using a chatbot is simple. “Younger generations now gather information about and approach Allianz through social media platforms, rather than the internet site or traditional means,” he says.

A survey by market research company ORC International of more than a thousand Americans found a significant generational gap when it came to the understanding and acceptance of chatbots.

Yet perhaps the most significant finding of the research is that 27 per cent of millennials felt more favourable about chatbots, compared with just 8 per cent of older generations.

What may be driving this is greater penetration among younger generations of the messaging applications such as Facebook’s Messenger or WhatsApp, which are a natural fit for chatbot technology. Ofcom says that in the UK, 60 per cent of 18 to 24 year olds use WhatsApp, against 28 per cent of people aged over 55.

The greater usage of these apps for everyday life may explain another of the findings of the ORC survey that two out of five millennials believed chatbots give better service than humans, double the number of older people who do. 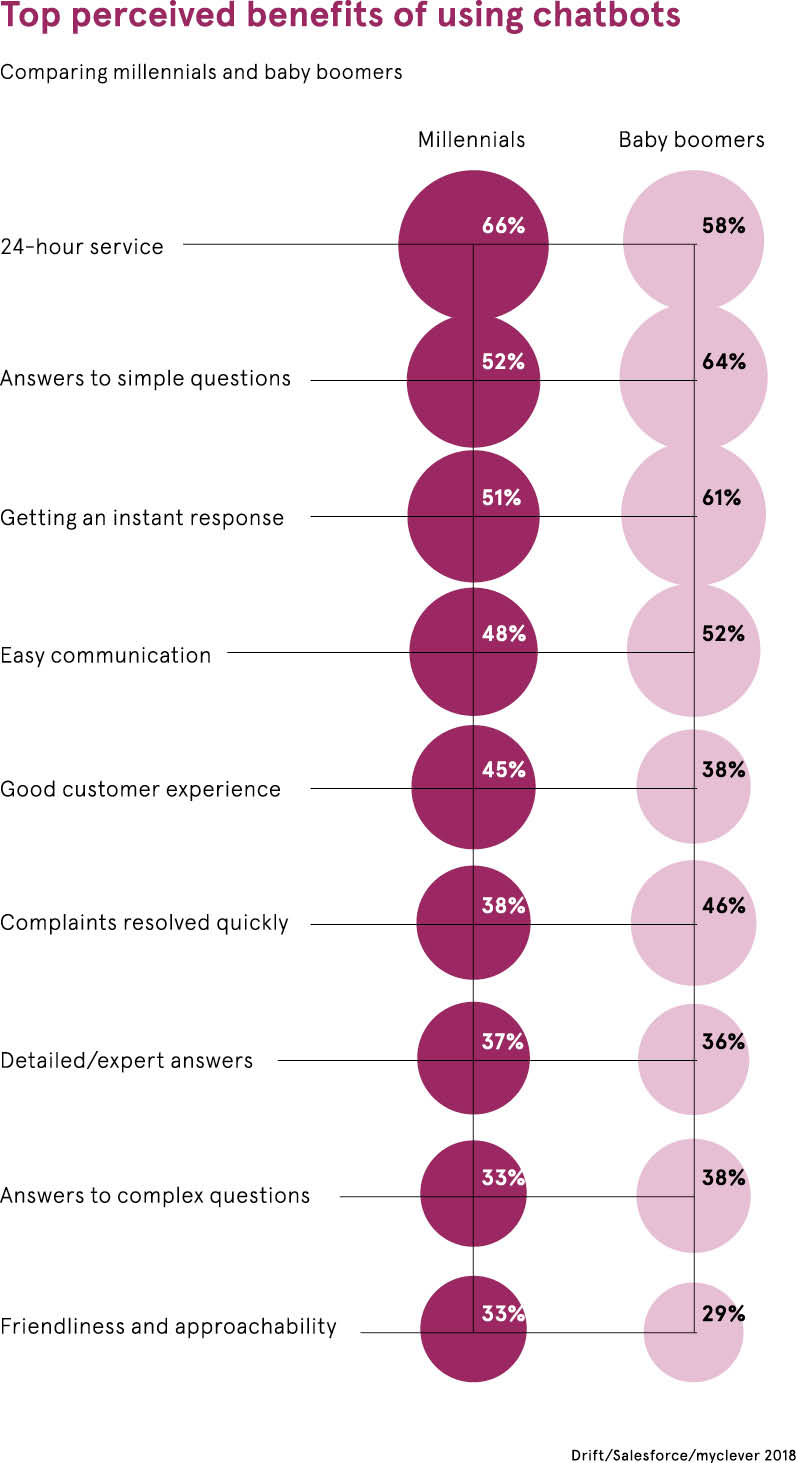 There are two key drivers to explain growing chatbot adoption, according to Max Richter, who leads Accenture’s insurance analytics practice across Europe.

“Text messaging and voice are becoming major interaction channels that consumers want to use,” he says. “Some of the more forward-thinking insurance companies are using that as a key part of their interaction strategy with customers.”

The other driver is cost-efficiency. “Chatbots are a way of servicing a channel in a more consistent and scalable way while at the same time being relatively cost effective,” says Mr Richter.

Although cost-savings are important, reducing headcount is not necessarily the outcome. “Where insurers are deploying chatbots, it is often to create capacity for employees to work on higher-value activities,” he says.

There are a growing number of insurance companies that want to tap into this millennial trend. Dutch insurer Nationale-Nederlanden has used a virtual assistant called Nienke to answer customer questions on its website since 2011.

More recently, US insurer Liberty Mutual has launched a skill for Amazon’s Alexa which lets users obtain a car insurance quote as well as getting advice on common home and car insurance concerns.

Insurers are using chatbots to handle quotes rather than web-based forms, which are often lengthy and difficult to navigate, to improve conversion rates

Nor are the uses of chatbots in the insurance sector just consumer facing. Co-operative Bank in the UK implemented a chatbot called Mia to help its call centre staff answer consumer queries more quickly. In the United States, Allstate launched a chatbot called ABle that helped its agents sell commercial insurance products by taking them through the process and allowing easier access to relevant documentation. 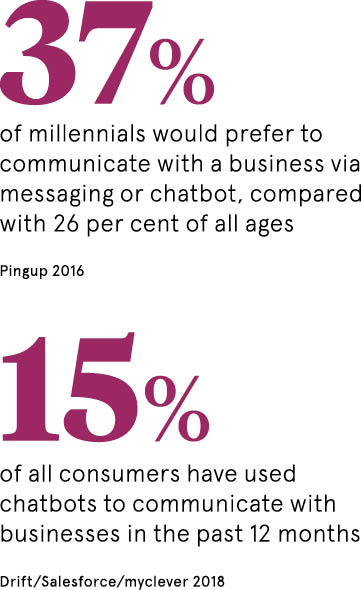 Insurers are using chatbots to handle quotes rather than web-based forms, which are often lengthy and difficult to navigate, to improve conversion rates. “I have seen customers who have used chatbots and there has been an increase of up to 30 per cent in conversion rate,” says Mr Richter.

Chatbots are finally gaining traction in the sector. Mr Richter says that most insurance companies are in the early stages of implementing chatbots, running internal pilots or limited client-facing campaigns to show there is real business value from using this technology before deploying it on a larger scale.

Often these trials are run internally to prove the technology and often in non-insurance related areas, such as booking internal meeting rooms, employee holidays or interacting with business partners.

But there are still some barriers to growing chatbot adoption in the insurance sector. The ORC survey showed there was some reluctance to use the technology for what could be seen as “more serious” applications. Some 74 per cent of millennials said they would be happy to use a chatbot in a drive-through fast-food restaurant, for example. However, just 34 per cent said they would use one to talk to an insurance company.

However, we are only just scratching the surface of what chatbots can do. Allianz thinks its virtual job assistant Allie has potential to do even more. The company’s Nadja Gruber says: “She could answer questions about the status of an application. Integrating other technologies, such as machine-learning and artificial intelligence, could mean Allie could even become ‘smart’ enough to match CVs to suitable job offers.”

It is easy to see how chatbots can help make the life of brokers easier too, for example in handling inquiries about the status of claims.

While millennials seem ready to welcome chatbots with open arms, it is just the start for wider adoption. “I think age is one factor, but it is not the only factor,” says Mr Richter. He sees acceptance of technologies such as chatbots differ between countries and socio-economic groups. “In some countries, you see much older age groups say this is their preferred interaction channel,” he points out.

Yet the younger demographic is driving adoption and Mr Richter believes that within the next five years most insurers will be using chatbots for communicating with customers and winning new business, but also for interaction with suppliers and enabling internal communication among employees.

“The chatbot is not going to become as ubiquitous as the call centre in that period, but it is going to be a standard part of the mix,” he concludes. 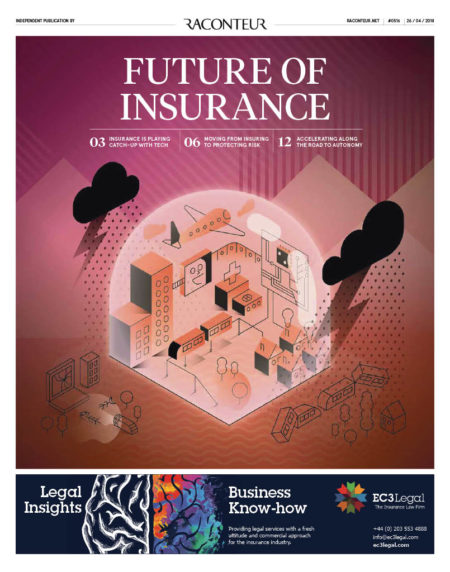