Five years from now, going shopping could be a very different experience. A range of new business models are likely to revolutionise retail and transform the way we shop.

Investors are looking for the next great advance in retail which will break the mould and herald a new era for commerce.

Frederic Court, who has just set up his own venture capital fund called Felix Capital, is on the hunt for the next big thing in retail. His previous investments include Farfetch, an online store which sources high-fashion items from boutiques around the world.

“There will be a big, big change in the retail industry. We see new developments emerging that are technology-led and which will disrupt the established players,” he says.

He points to the emergence of what he calls full-stack commerce, with companies that design, manufacture and distribute products. “They can sell a product at a higher gross margin of 60 to 80 per cent rather than the traditional wholesaler’s gross margin of 40 per cent. We are interested in companies with the opportunity to go direct to customers to create a unique product you can’t find anywhere else,” he says.

Mr Court gives the example of French online retailer Rad.co, in which he has invested. It creates printed streetwear on demand and carries no stock. “They have partners who create that for them; they only incur the costs when they make a sale,” he explains, predicting there will be more such retailers in different sectors. He points to Casper.com in New York, which he says has revolutionised the selling of beds, creating high-quality mattresses and delivering them across the city by bicycle.

Shoppers are increasingly buying online and using physical stores as showrooms for viewing goods. Some retailers are building this trend into their business models. Online menswear retailer Bonobos offers personalised fitting and styling at 19 “guideshops” across the United States.

Rapid advances in technology and data are likely to do to traditional shopping what Airbnb has done to room rental and Uber has done to taxis. Henry Mason, managing director of consultancy Trendwatching, says: “There is an interesting moment coming when you combine the internet of things and the sharing economy.” Once everyday items have computer chips in them and are connected to the web, retail could be transformed beyond recognition. “What happens when physical goods become easily manageable and shareable with anyone? You get a very interesting model,” says Mr Mason.

He envisages the creation of a version of the Tinder dating app for retail, making it easy to find what you need in the local area. Ordinary people can share, hire out and sell their own goods – any item. People could buy goods as an investment for rehire. “We’ll all become retailers,” he says. He has identified another trend he calls “pre-tail” where entrepreneurs fund new ideas through crowdsourcing and win customers before they have even created the product.

A big trend that is transforming retail is the subscription model, where for a regular fee, usually monthly, a retailer will curate and supply your goods. A pioneer in this area is US menswear service Trunk Club, bought by luxury department store group Nordstrom last year for $350 million. Trunk Club offers men a consultation, online or in-store, with a stylist who elicits their preferred fashions, then makes up a trunk full of clothes and sends it out to them. The customer can keep all the items or send back ones they don’t like.

The idea of subscription retail is catching on with entrepreneurs and, following the sale of Trunk Club, many others have been trying to create their own subscription businesses for a variety of sectors.

“Subscription models are something we’ve seen a lot of,” says Baz Saidieh, a partner at TrueStart, a London-based incubator for retail startups which is part of True Capital. “We have also seen a lot of me-too products out there, where something is created and people believe they can create a huge business by copying it,” he adds.

True Capital is backing VITL, a subscription service for vitamins and supplements. “Where we see differentiation is with companies that really know how to execute their idea,” says Mr Saidieh. “A lot of businesses come in and forget about the product; they just think about the digital side of things.” The expertise and skills of the entrepreneur are as important as the business model they invent, he adds.

Incubator TrueStart is backing a host of other startups with new models for retailing. One is recycling site Clotho, which allows people to send in their used clothes and get credits they can use to buy other used items from the site.

Another big trend is for apps that enable social shopping. London startup Snap Fashion offers a smartphone app which enables users to photograph an item of clothing they like, then it finds similar items online from more than 170 retailers.

Meanwhile, retailers are trying to transform their business models to a multichannel platform, where they can offer their goods across channels, whether mobile, desktop, tablet, social site or physical store.

The successful business models of the future will push the multichannel approach to the limits, using data and technology to make shopping quicker, easier and more fun. Value for money will be a powerful driver, but most important will be finding innovations that remove the barriers which hold people back from making a purchase. 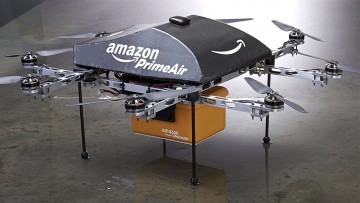 Shoppers crave instant gratification from purchases, which means ensuring they get their goods delivered quickly and cheaply. Delivery is becoming an essential part of the next wave of retail innovation. Even Starbucks is trialling delivery of piping hot coffee to customers through the courier app Postmates.

As Frederic Court at Felix Capital says: “There are several initiatives in the market to get someone to deliver by foot, by bike or by car that will transform the way people access products.”

Amazon has the most forward-thinking delivery proposition with its Prime Air drone delivery system. The US Patent Office has recently published details, revealing that the drones would track the location of the recipient using data from their smartphone.

Instacart is a grocery delivery service operating across America which offers to get groceries to your door from a selection of retailers within one or two hours of placing the order. In London, a service called Deliveroo is trying to revolutionise take-away food by organising deliveries from restaurants.

Another area of experimentation is in making it easier to deliver goods when people are not home. Volvo has developed a system where consumers can have goods delivered directly to their car boot. Using GPS technology, the delivery company can locate the user’s car and open the boot to place the goods. Amazon has announced a tie-up with DHL and Audi to trial in-boot deliveries for Audi cars.

E-commerce has also created a growth of cargo bike deliveries, with the likes of Outspoken delivering everything from Amazon parcels to take-away food on two wheels.